I know nature is cruel, but at least this crow would have the experience of being where it lived when it died. 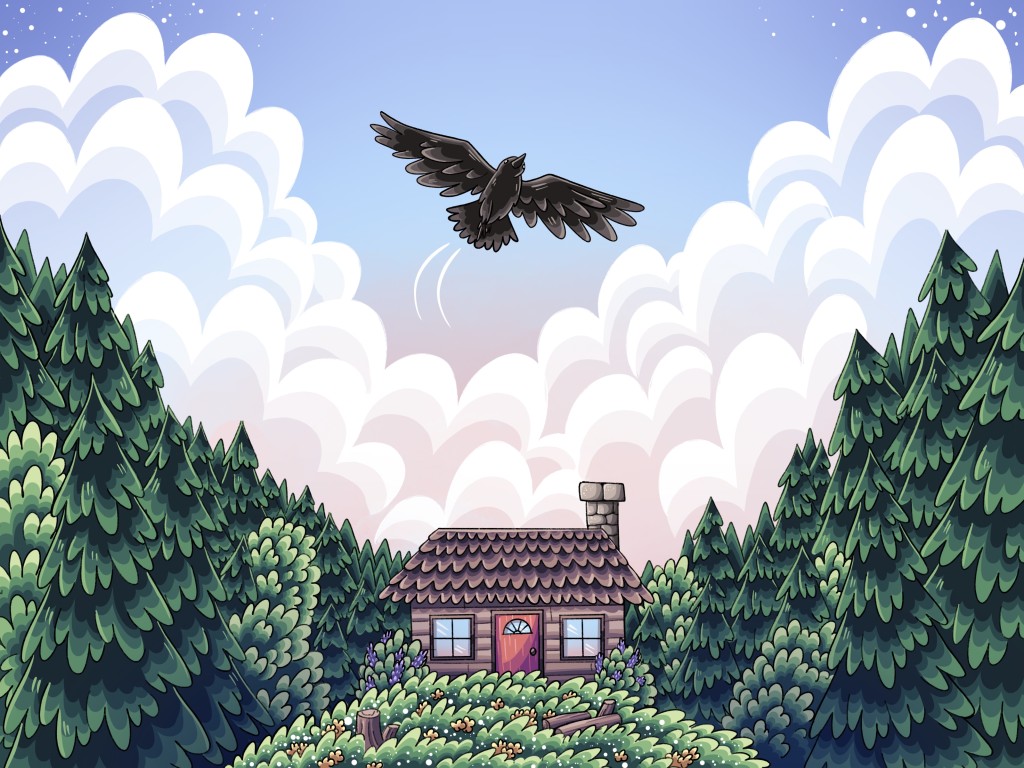 I recently moved, at the age of 69, into a cabin in a woodsy area of the White Mountains of New Hampshire. As spring began to gently push away the winter cold, several days in March hitting the 50s, I went out one morning through the front door to see a crow sitting just past the woodpile, on the mound of earth there among the trees and brush. I could tell it was wounded, since it didn’t try to jump or fly. I went back in, watched for a while through the front door windows. It moved a little, not quite hopping, pulling itself a foot or two. Probably a broken wing. My heart sank.

I went inside, cut up some raw pork into ground-meat consistency, came out and placed it a few feet away, showing it to him first. (I’m calling the crow a him, since there’s no way of telling the difference between crows by markings or characteristics. Males tend to be larger, and this was a large crow — so.) I went back inside, looking out through the door window. He immediately crawled his way over, eating it all in less than a minute. Good, I thought.

We went through this routine several times. He’d begun moving, distances of about 5 or 10 feet, from the last place he was. He couldn’t stand up, but his legs seemed to enable him to hop a little, with the help of his wings pushing on the ground. One wing flapped normally, the other moved slightly.

I was torn over what to do about him. I looked up New Hampshire Fish and Game and called the one place that rescued crows, along with other birds. One of the wildlife rehabilitators only took turtles. I was told I’d have to catch and put the crow in some kind of protective box, drive there and back. Two hours each way. The woman I spoke to said if they couldn’t fix the wing so he could fly, they’d have to euthanize the crow.

That did it for me. I wasn’t going to relegate this creature’s last days to being inside a very weird (for him) facility, where he was poked and prodded and then possibly put down. I know nature is cruel, but at least this crow would have the experience of being where it lived when it died.

Yet after deciding this, coming to what I thought was at peace with it, a wave of guilt surged through me for several days, a hero notion I was abandoning. If I captured him and he was fixed, he’d be free, up in the air again. I’d see crows at the side of the road as I drove and get a tinge of something that made me feel like I’d have this sin, a black mark of inaction, within me for a long time, reminded by every crow I saw.

At this point, he’d disappeared for a few days, so whatever became of him from here on in was out of my hands. That made my sense of guilt even deeper, because now I didn’t know where he was. I couldn’t rescue him if I wanted to. Then one day, a little ways up the road in the woods, I saw him sitting on a log, solidly perched, holding on by his feet. I got some ground pork, came back, tossed it near, and left. A few days after, I saw him up a tree, on a branch about 15 feet high. Excellent. Now I knew he could at least use his wings, probably leaping up a few feet at time, branch to branch, protect himself from predators, come down to land to get food. He disappeared again, and again I found him up the road, perched on a log hanging out over a frozen stream. I left some more meat.

When I went up the road to look the next day, he was gone. There’s a small incline up into the woods above the road past which there was a field, where he logically should have been, and I looked, but no crow. I was, by the way, calling him Poe by then. I checked for several days, walking the road. No Poe. I could only hope he was surviving, acclimating himself to limited mobility, learning to adapt. I’d read that crows mate for life and this drew a poignant picture of his mate coming down to be with him but then having to fly off to find food or be with the other crows. Rejoin the “murder,” which is what a group of crows is called, somehow fitting, especially for one named Poe.

A week went by, then I saw him through the window one morning, just outside the door near the woodpile, walking quite easily on both feet, tilting back in forth in his walk the way crows do. I cut up some raw beef and once outside, saw he was off a ways in the woodsy part of the front, sitting on the top of a downed tree. I showed him the meat, tossed it and went inside. Within a minute, he’d hopped down and walked quickly over, ate some, then filled his mouth and went up into the woods beside the cabin, until I couldn’t see him. He came back quickly, without the meat, repeated the process. He was storing it somewhere for later, which was a nest, I hoped.

Later in the day, I saw him on perched on the same fallen tree. I went out again, this time with a large handful of bird seed, which I could only show to him by dropping it. I walked a bit closer, too close for Poe — he suddenly sprung off the tree and flew away effortlessly, disappearing in seconds.

My heart soared along with his flight. My instincts had been right — I hadn’t dislocated him from his home, he could still be with his mate, I was just a stop on his journey, where, I hoped, he’d come now and again for food, with the remembrance of a kindness done. Whatever was wrong with his wing, it must have been a minor break or sprain that just needed some time. Crows are highly intelligent, and though I know he’d never let me get too close, I hope he decides to return. Drop in occasionally to thank me for feeding him when he was helpless and hungry — and coming back, of course, for more. Perhaps not, maybe he’ll just be somewhere else now, alive, flying, with his mate and his murder. I’m completely happy that he’s OK. He has his freedom. I’m free as well, of carrying a persistent guilt.

The trouble is, I’ve grown accustomed to him. The selfish human part of me wishes he were my bird, living somewhere in the range of the cabin, visiting me when he wanted a free meal, in my field of vision, off there at a safe distance. Then again, I’m reminded of the secret imparted by a wise fox to a small boy in Antoine de Saint-Exupéry’s immortal book “The Little Prince”: One sees clearly only with the heart. Anything essential is invisible to the eyes.

If I see him again, or if I don’t, there’s always that invisible place, where he’ll continue to be.

Where to Find the Best Ice Cream in NH

Where to pick your own blueberries in NH