Trivia Night With Bill & Cody returns to the Rex Theatre in Manchester for another fun evening of music, drinks and trivia 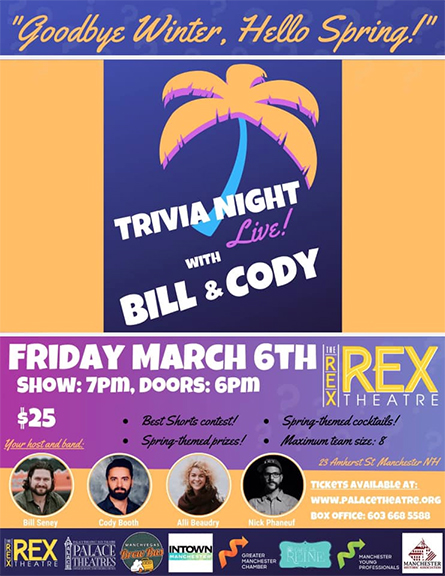 This trivia night, promises Bill Seney (one half of local favorite Trivia Night With Bill & Cody) will be “amped up.” Featuring a live band — Alli Beaudry accompanied by Seney’s partner-in-trivia Cody Booth on drums — plus bigger prizes, beer samples and more, this is well beyond the usual question-and-answer format at your local bar.

This is their fourth such event, and the second to be held at the new Rex Theatre in downtown Manchester. Their Rex debut (a first-in-the-nation primary-themed event in January) was such a success, says Seney, they were asked back to host another. The March 6 event, “Goodbye Winter, Hello Spring,” is about “all things spring,” explains Seney, with prizes from the Fisher Cats, seasonal cocktails and a best shorts contest. Players are encouraged to dress for the occasion, and will “parade on stage,” with the person sporting the best shorts taking home a special prize.

Beaudry and Booth will play between rounds, and will also provide the music for the audio round. Adding to the fun is local Manchester craft brewery Great North Aleworks, who will be bringing samples to hand out before trivia gets underway.

Get There
March 6, doors open at 6 p.m.
Trivia begins at 7 p.m.
The Rex Theatre
23 Amherst St., Manchester
Tickets can be purchased here.

As for future events, plans are in the works to make this a regular every-other-month event at the Rex, says Seney, so stay tuned for more details.

Full disclosure, some of the New Hampshire Magazine staff and our McLean Communications coworkers are semi-regulars of Trivia Night With Bill & Cody, but that only means that you can trust our recommendation — it’s a really good trivia night. With the additions of great live music and local beer, we’re positive this will be a fun night out.

Teams are capped at eight participants, so no creating super teams. The cost is $25 per person. Doors open at 6 p.m. and the fun gets underway at 7 p.m. We’ve started forming our team, and we look forward to the competition!