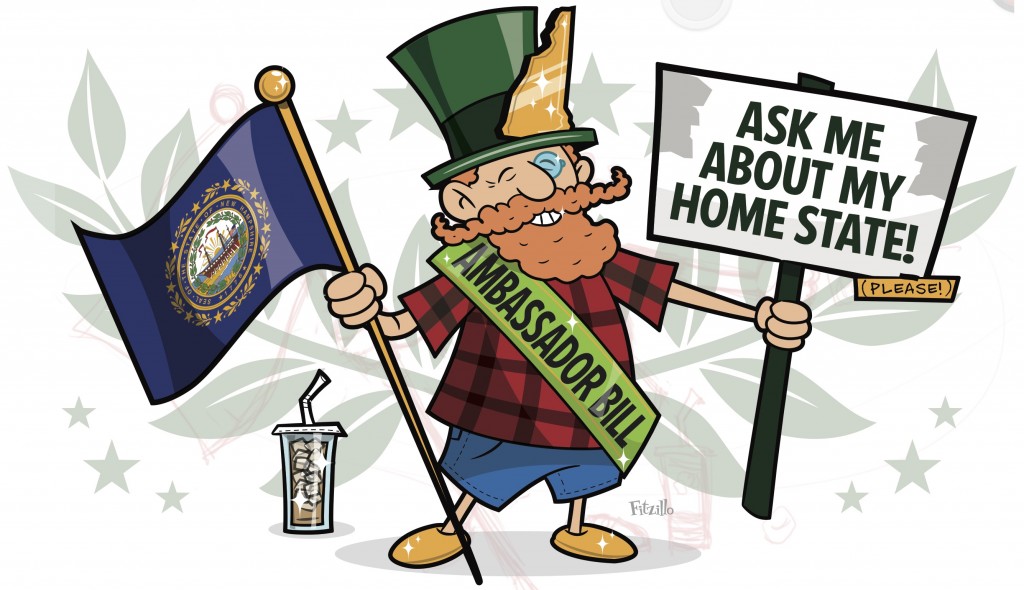 Anyone want to talk about New Hampshire? Because when I travel, I don’t encounter many that do.

I find myself in airports fairly regularly, and on those occasions I love talking to people and learning about where they’re from, what life is like there and what they love best about their home states. That curiosity is not always reciprocal.

I was recently traveling with a friend from slightly south of Salem. We engaged a few people standing near us, and the conversation eventually came around to, “Where are you from?”

When my friend said, “Boston,” they immediately started reminiscing about visits to Quincy Market, haranguing us about the Patriots and discussing some of the universities around the city.

Then it was my turn to brag about my home state.

“New Hampshire,” I told them.

No matter where I go, it seems very few people have much to say about the Granite State. The closest I’ve come was when someone told me they fell down the Casino stairs after a Phish show in the early ’90s.

I attribute such awkward nonstarters to a lack of knowledge about our region. As the quiet cousin, New Hampshire will tell you how different it is from Vermont while tipping its orange-blaze cap toward Maine, judging Massachusetts and ignoring Connecticut.

People just don’t know about our deep forests, stately mountains, our active (and admittedly abbreviated) shoreline, the bucolic Lakes Region or our many tattoo and fireworks options. Yet they could know, if the right person was available to impart such knowledge.

To that end, I’d like to announce my willingness to stand as ambassador from New Hampshire. My bona fides include such notable accomplishments as “my wife had an awesome radio show on WUNH,” and “the lady at the Over Easy Diner in Hampstead knows my usual order.” I’m perfect for the position because I am of New Hampshire — I wear shorts in February and I don’t know my neighbors across the street even though we’ve lived in our house for 23 years.

I can certainly do the job, but since it’s a largely ceremonial position, there will be a few modest requirements.

I’ll need an embassy. My house is fine, but establishing a headquarters closer to vital centers of commerce would be helpful. Like maybe near the Music Mill or that new noodle restaurant on Elm Street. Man doesn’t live by fried clams alone. Mostly, but not entirely.

I’m going to need a sash. It will announce my position and lend an air of importance to my newly appointed station. Just keep the wording on it simple, with something along the lines of “Ask Me About My Home State” or “King of New Hampshire” or something. A monocle wouldn’t hurt either.

A small marketing budget. We need a new slogan. “Live Free or Die” is classic, but “Iced Coffee Year-Round” or “Hoodies Aplenty” is slightly more inclusive.

Just a bit of bureaucratic leeway. I’d likely stop short of declaring war on Massachusetts, but perhaps annexing everything north of, say, Kelly’s Roast Beef would be my first act. It’d certainly be a conversation starter.