From America The Cookbook, 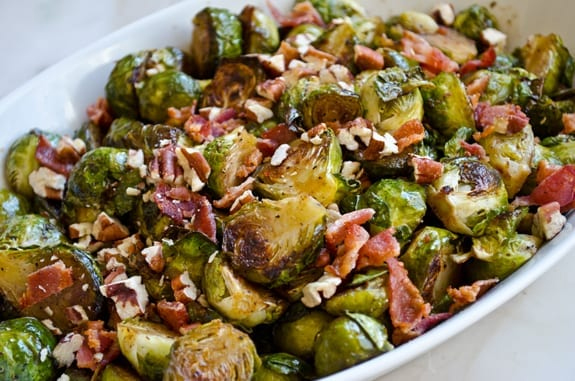 It was an ambitious project, but publisher Phaidon and editor Gabrielle Langholtz managed to compile recipes and food essays of historical and regional favorites from each state — 800 in all. “America: The Cookbook” is food lover’s travel guide. Find classic recipes and new twists that represent local foods and the current food scene too.

New Hampshire is represented with recipes by baker Alison Ladman, owner of The Crust & Crumb Baking Company in Concord, who shares classic recipes for turkey and a bourbon apple shortcake.

To highlight the diversity of the cookbook, here is a Brussels sprouts recipe from Vermont that uses (of course) maple syrup. We have maple syrup too — consider using some made here in New Hampshire. Either way, this dish will be a perfect for your Thanksgiving table.

In a large frying pan, cook the bacon over medium-high heat until crisp, about 10 minutes. Remove the bacon with a slotted spoon, leaving the bacon fat in the pan. Add the Brussels sprouts and cook over medium heat, stirring, until the sprouts are a golden brown and barely tender, about 15 minutes. Add the maple syrup and cook for another 5 minutes. Toss in the bacon and season to taste with salt and pepper. Serve immediately.