Hopefully not all trails are so aptly named 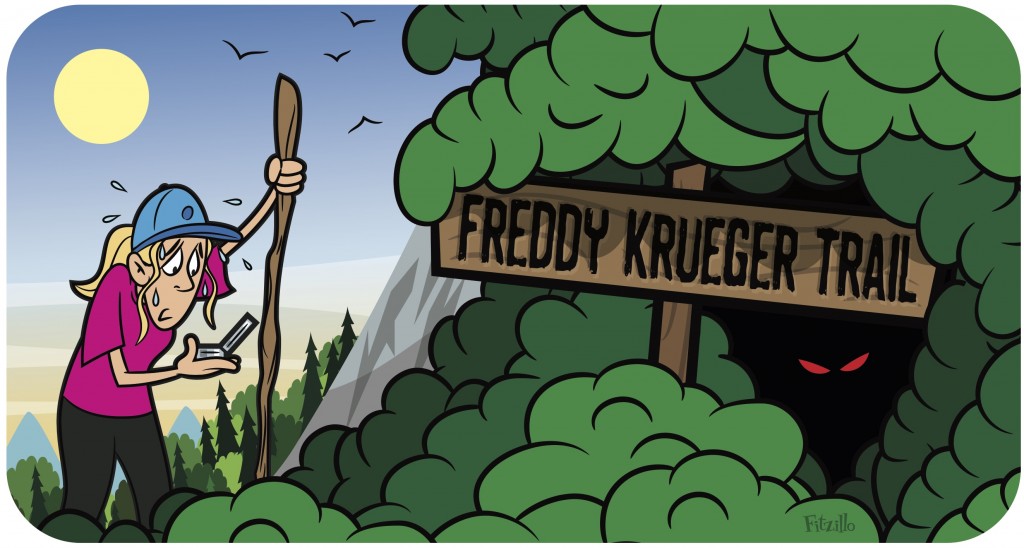 I was reading the trail reviews for Bear Brook State Park (which is only a stone’s throw from my house) the other day, and I noticed one of the main complaints from many of the hikers and mountain bikers was that the trails should be more clearly marked.

I can personally vouch for that. Not long ago on a hot summer day, I went for what was supposed to be a short walk. I parked just off Podunk Road, which runs through a section of the 10,000-plus acre park, then walked up the trail to Hayes Marsh.

One of my friends previously had recommended a “scenic little trail” to the right of the marsh. “It loops right back to Podunk Road,” she said. “Just be sure to take a left every time you come to one and you’ll be fine.”

As the woods got deeper and darker, every horror movie I’d ever seen suddenly sprang to mind: Freddy Krueger with daggers on his fingers, Jason Voorhees with his hockey mask and machete, and the Big Bad Wolf with Grandma in his stomach. I picked up a rock for protection, despite the fact that with my aim, if anything smaller than a Tyrannosaurus Rex came charging out of the bushes, I knew I wouldn’t be able to hit it anyway.

At the top of one of the many killer hills I had to climb, I finally spotted a trail sign. Ironically, it said I was on Lost Trail.

“How appropriate,” I muttered, taking little comfort in the thought that the guy who’d named it must have had a good reason for it. I half expected to find him up ahead somewhere, living in a cave and being raised by wolves.
I later came to a trail intersection with more signs. The choices were Ledge Trail and Ferret Trail. Well, I didn’t like the sound of the word “ledge,” as it immediately conjured up images of my fingertips desperately clinging to a cliff as I dangled over the edge. And “ferret” sounded like a narrow, weasel-made trail. So, fool that I was, I stuck with Lost Trail … and proceeded to get even more lost.

When I finally saw a marker pointing to Podunk Road, I nearly did a victory dance (I say “nearly” because I was too exhausted by then to lift my feet). That was until I noticed, in small print, “1.9 miles.” I would have cried, but at that point, all of the fluids in my body had dried up from dehydration.

A few weeks later, I was talking to one of the park’s employees and mentioned my little adventure to him.
First, he scolded me for having ventured out hiking so unprepared for emergencies. Then he chuckled and said, “Now you know why it’s called Lost Trail! Believe me, it’s appropriately named.”

Well, if all of the other trails in the park are also appropriately named, I think, just to be on the safe side, I’ll steer clear of Bobcat Trail and Bear Hill Trail.