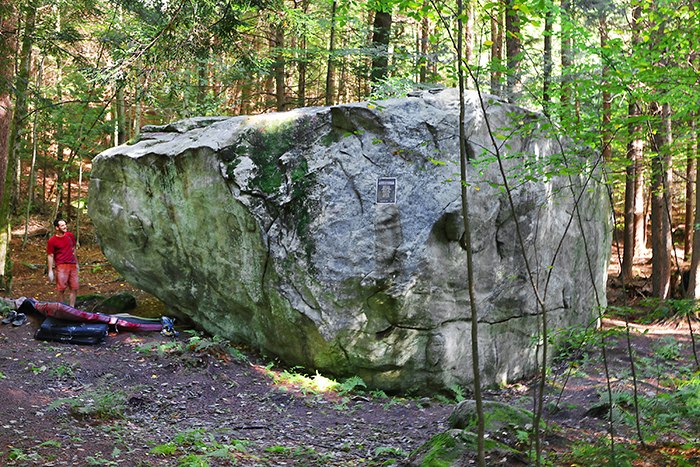 The Richmond Boulder is a huge glacial erratic. Photo by Stillman Rogers

After writing about towns all over the state, I am at last really writing about our town. We’ve lived in Richmond long enough so that half the town thinks we’re natives. Our Herbitage Farm Herbs sign was for years a landmark observed by UPS and FedEx drivers — seriously, a neighbor showed us a notation on a UPS label that said “three houses south of the herb farm.”

The farm is still here, but we no longer have a table of herb plants beside the road. The town has changed in other ways too. It’s grown, of course, but it’s also become more aware of its own rich history. This is largely due to the advocacy of Bob Weeks, who spearheaded the community effort to restore a rare bit of New England history that had lain forgotten and deteriorating in a swamp beside Route 119.

The Richmond Tramp House, now a mini museum, sits in a pocket park near the Four Corners — the junction of Routes 119 and 32. Tramp houses were a common sight in small New Hampshire towns between the Civil War and the 1930s. Industrialization and economic depression created a growing migration of unemployed men who left the cities where they couldn’t find jobs and roamed the rural areas hoping for work on farms.

Partly to keep an eye on these transients and partly from a sense of responsibility to those without homes or means, towns built simple one-room shelters where they could spend the night and find a simple meal. At one time, there were about 40 of these in New Hampshire, of which only four still exist. Richmond’s is one of only two that have been restored. 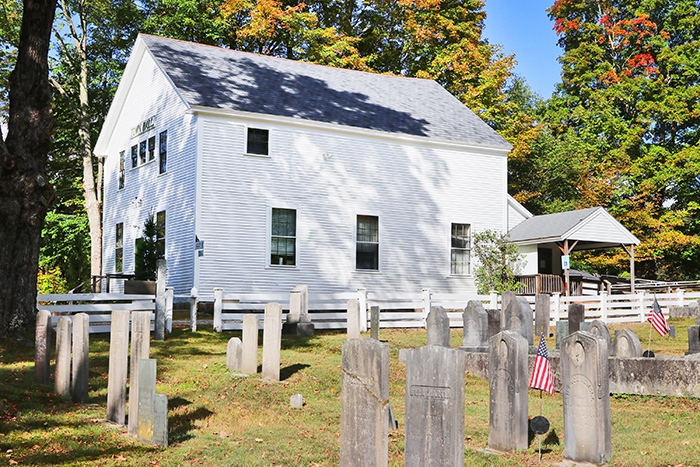 The historic Richmond Town Hall dates back to 1780. Photo by Stillman Rogers

Until 2015, few people in Richmond even knew the crumbling building existed; even fewer knew what it was until Weeks began his campaign to drum up support for the project. The Richmond Heritage Commission, chaired by Selectman Carol Jameson, took on the project and raised $8,500 for the materials; the town kicked in $500 and the rest of the materials and all the labor were donated. The little red building is now easily spotted by the roadside, and although it’s only open on town occasions, you can look in the window anytime to see the simple interior with its narrow bed and period woodstove.

Across from the Tramp House is the Richmond Public Library, a small wooden building that was once Richmond School House No. 6 — one of 14 that once served various neighborhoods. The Heritage Commission took on the task of building a replacement for the cupola shown in old photographs, and restoring the school bell, which had been in the library basement, to its original perch. The bell rang for the first time at the annual Firemen’s Barbecue in 2016.

The Heritage Commission is not the only group actively engaged in preserving the town’s history: It is working with the Richmond Historical Society to build a memorial honoring the 76 town residents who served in the Civil War. Interestingly, more than half those men were grandsons of Richmond men who had served in Revolution.

It may seem as though 14 schoolhouses was an awful lot for a small town, but Richmond spreads over 37.76 square miles, and was once made up of a number of clusters of settlement that are gone today. We find remnants of these while following old roads, some of which are only wide trails now. Stone walls, cellar holes and tumbled foundations attest to these long-gone farms and neighborhoods. 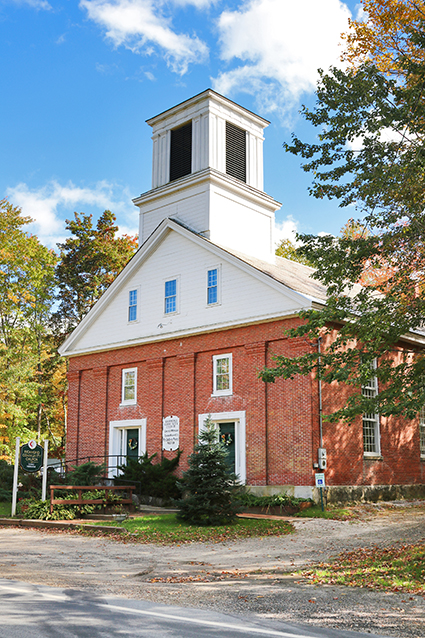 These are not the only interesting stones we find hidden in Richmond’s woods. Within a few yards of Route 32 in North Richmond is the Richmond Boulder, a huge glacial erratic dropped by a retreating glacier. It was once quite a local attraction; an old photograph shows a large group of men in suits and women in voluminous skirts, sitting atop it enjoying a picnic. It’s that big. To find it, look for a small pull-out on the east side of Route 32 just north of the intersection with Fish Hatchery Road, and follow the trail to the right.

Hidden more deeply in the woods about a mile from the Massachusetts border, and not so easy to find, is the long-abandoned and overgrown Harris Soapstone Quarry. Once an active industry, today it’s mostly known for the museum-quality cordierite crystals still occasionally found there.

Alongside Route 32 you’ll see the town’s lone state historic marker, commemorating Hosea Ballou, known as the Father of Universalism. Ballou was born in 1771 on a farm in Ballou Hollow, on nearby Fish Hatchery Road. He followed his father’s footsteps into the ministry but preached a far more liberal creed than his Baptist father. Liberal even for a Universalist, Rev. Ballou rejected the remnants of Calvinism along with the notion of a vengeful god. From 1817 until his death, he was pastor of the Second Universalist Church of Boston and wrote more than 10,000 sermons.

The Ballou name weaves through Richmond’s history — Eliza Ballou, mother of President James Garfield, was born here in a house that’s still standing. There is a monument to her on, appropriately, Monument Road. At the Four Corners stands the historic Old Brick Church, and next to it, the 18th-century barn at Pickering Farm Quilt Shop displays an eye-boggling collection of quilting and rug-making fabrics. It’s not the only shop in town; around the holidays there’s a charming gift shop at Windswept Mountains View Christmas Tree Farm, where we choose our tree each year overlooking a view that stretches to Vermont. Between the two on Route 119 is Olde and Early Antiques, specializing in country primitives, and on Route 32 J.D. Wahl Antiques sells furniture, folk art and antique stoneware.

We have a brewmaster at Ashuelot Brewing, a baker at Dan’s Brick Oven Bread, and we can buy non-GMO meats and poultry at The Farm at Crooked Creek Hollow. I stop for eggs when there’s a sign out in front of the house up the road. But we no longer have our 4-Corner Store, for generations the town’s center of communications. We bought our milk and eggs there, filled our tanks at its pumps, and were greeted warmly by Gerry Brewer, who lived across the street. We met our neighbors there and kept up with what was happening in town. With the closing of the store a few years back, we lost all that. Everyone misses it and most want to build a new store. All we need is someone to run it.