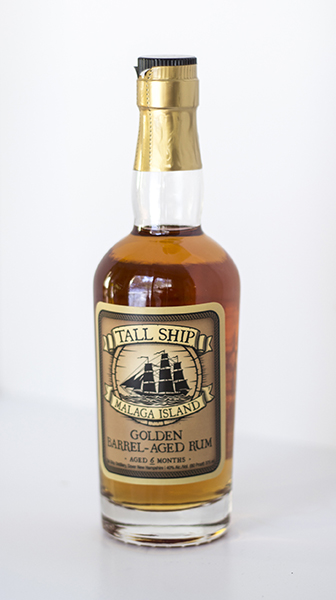 When Tall Ship Distillery opened in August of 2014, it became the first liquor distillery that the town of Dover had seen since at least 200 years ago — back then, actual tall ships were still being used to transport liquor.

Owner John Pantelakos, 58, and head distiller Matt Witham, 39, have made sure that the history of the tall ships is reflected in their products.

“It took a while to think of our name,” says Pantelakos. “We chose Tall Ship because that’s the way they used to bring the liquor in. The tall ships would anchor in Portsmouth and then they’d ship it up the river.”

It may not come as a surprise, then, that the idea for Tall Ship Distillery began on a type of tall ship.

“I went on a cruise in 2011 and I got introduced to this aged rum. When I got back, I was wondering about how you make rum,” says Pantelakos.

It didn’t take long for his curiosity to lead him to action. Pantelakos began experimenting with the rum-making process by testing out dozens of different formulas and teaching himself how to weld a copper still.

After he succeeded in welding a 250-gallon still, Pantelakos realized he needed to recruit some part-time help if he was going to keep his experiments going. Matt Witham, who was a neighbor of Pantelakos, was more than happy to lend a hand.

“I asked Matt, if things work out, will you be my distiller?” says Pantelakos. “He says, ‘Don’t threaten me with a good time.’”

Pantelakos and Witham began production at Tall Ship Distillery in July 2013, and 13 months later, they were finally able to offer White Island Rum as their first product. Since then, Tall Ship has added five more drinks to their lineup. Their Appledore Rum has become the bestseller, largely thanks to its unique maple flavor.

Another unique product that Tall Ship offers is their 260 Vodka, which honors deceased Greenland Police Chief Michael Maloney. Chief Maloney, who wore badge number 260, was killed in the line of duty in 2012.

Pantelakos was Maloney’s brother-in-law, and the tragedy inspired him to give back to emergency workers and their families. A portion of the profit from 260 Vodka goes to the Chief Michael Maloney Memorial Fund.

Right now, to benefit both themselves and their community, Tall Ship’s focus is on marketing their brand to reach more customers. One of their most effective methods in getting their name out so far has been the free tours they offer at the distillery. The tours draw a good mix of people, but Witham joked that he can usually tell when someone is about to walk through their doors.

“If I see a pickup truck with veteran plates roll into the parking lot with a big bearded guy behind the wheel, they’re probably coming to visit me,” says Witham.

Off the strength of Witham’s tours and the savvy marketing team of Pantelakos and his daughter Katie, Tall Ship has managed to get into about 75 restaurants in New Hampshire, as well as several of the state’s liquor stores.

Pantelakos plans on being available in all the state’s liquor stores in the not-so-distant future, and he is always working on new ideas with Witham to boost their sales in order to achieve that goal. One of their most exciting ideas is their plan to introduce a whiskey by 2020.

Pantelakos, who does not make a salary from Tall Ship, is optimistic about the future of Dover’s first distillery in 200 years. He is grounded by his philosophy that patience always wins in the end.

“To me, take baby steps and work your way up. You’ll get there someday,” he says.