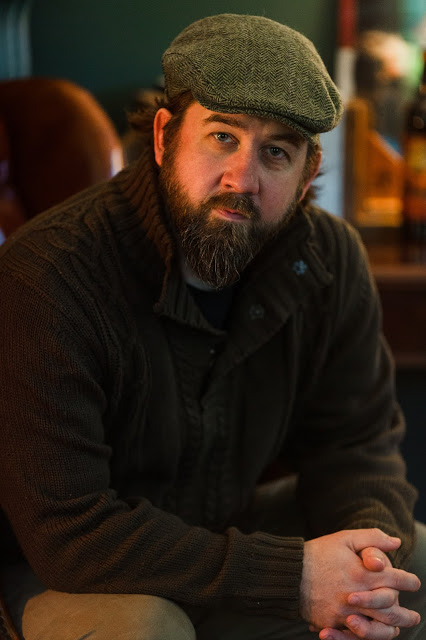 If there’s something strange, unexplained, spooky or just plain weird, J.W. Ocker can tell you all about it and show you how to get there.

The award-winning Nashua author, who writes the “Live Free and Weird” series for NHMagazine.com, is about to release his seventh book, “Cursed Objects: Strange but True Stories of the World’s Most Infamous Items.” The book, which hits the shelves on September 15, takes readers on a tour through some of the world’s strangest artifacts and explains the stories surrounding the items. Ocker explores the legends and tales around pieces such as Annabelle the Doll (inspiration for “The Conjuring” films); The Unlucky Mummy (believed to have sunk the Titanic and started World War I) and The Ring of Silvanius, a Roman artifact thought to have inspired Tolkien’s “The Hobbit.”

We managed to lure Ocker away from his odd pursuits to learn a little more about how he got started, what he’d like to see and what really scares him.

How did you get started on the road to the unusual and odd?
Ocker: “That was mostly boredom and technology changes. The whole thing started when I was in my middle 20s. I was bored and not doing a lot. I started learning about weird places I could go to, so every weekend I’d start going to weird places. I had my GPS and Google maps — I’m a travel writer but I’m terrible with directions.

“Then I turned it into a website, oddthingsiveseen.com, and that’s what started opening up all kinds of doors. But it literally all started out of a sense of boredom.”

Get to Know J.W. Ocker

What’s the oddest thing you’ve ever seen?
Ocker: “The problem with the way I answer is that my sense of what is odd has completely mutated. What’s odd to me might not be odd to anyone else, and something other people find odd might not be odd to me at all. But I would say any time there’s a dead body involved, like in the catacombs in Rome or a saint’s relics in Connecticut — the severed arm of a saint.”

What?
Ocker: “It’s the severed arm of Saint Edmund. Anyone can go there and sign up to see it. It’s right by Mystic on Ender’s Island, which was populated by the Society of the Fathers and Brothers of St. Edmund in the past few decades, and they brought the arm of a saint with them.”

Do you have a favorite New Hampshire oddity?
Ocker: “It’s a little mainstream, but I love the drive up Mount Washington. It’s one of my favorite New England things to do. I have family members who are too scared to do it, but the drive up is fascinating. You feel like you’re going to fall off the side of the road, and you drive up into the clouds. It’s this completely unique spot up in the clouds, and it’s odder than we realize even though we all have those bumper stickers on our cars that tells everyone we did it. It’s super weird.”

Where do you stand on the supernatural?
Ocker: “I’m not a skeptic, but I have zero beliefs in the supernatural. I’ve just never had that experience. Maybe I’m just one experience away from accepting the paranormal. I love ghost stories and paranormal stories, and I’m always in places where those things are supposed to happen — in abandoned prisons and graveyards and asylums, but it’s never happened. Not even kind of. I can’t even pretend or twist an experience into saying it happened, but I want it for sure.”

Have you ever been legitimately scared?
Ocker: “Definitely. It just doesn’t happen to me in scary places like graveyards or asylums. As a writer I’m hoping for something, but when it happens to me it’s in my own house when my family is out of town. I’ve slept with the lights on in my house more than once. When you’re in an asylum, you expect to hear screams coming down the hall. You don’t expect eyeballs to come floating out of the trash compactor when you’re in your own house. You can freak yourself out anytime you want.”

What does your bucket list look like?
Ocker: “I have a massive bucket list. I have what I call the OTIS Map of Oddities I keep on my phone with more than 4,000 pins in different locations throughout the US — I’ve been to 40% of those pins. That’s my bucket list in the US, but there are so many places I want to go to.

“In New Hampshire I want to visit the Very Long Baseline Array Antenna. It’s right outside the Hancock/Dublin/Peterborough area, and it’s part of a global system of antennas — giant satellite dishes. It’s all for viewing space, and it’s right in the middle of the forest in New Hampshire. They’re these massive dishes that move sometimes, and I’ve always wanted to see it, but I’d have to get permission and jump through hoops because it’s on private property.

“My No. 1 thing in the entire world is to see the Elephant Man’s bones. They’re in London, in a hospital, and not on public display. They never show them off. I’ve always been really interested in Joseph Merrick’s story, but it doesn’t look like it’s in the cards.”

Tell us about your new book “Cursed Objects.”
Ocker: “It’s a very under-served topic, which was a big surprise to me when I took on the project. There isn’t a real compendium of famous cursed objects out there. There’s no real in-depth dive into cursed object stories. I think this might be the most comprehensive one out there.

“The other thing is that even though I’m not a believer in cursed objects as a paranormal idea, apparently there is some scientific basis where if you believe enough in a cursed object, that fortune can follow you. It might not be paranormal, but it’s a real phenomenon.

“I fell in love with cursed objects over the course of writing this. These are physical things you can tell stories around. The Hope Diamond is probably the most famous one, it’s in the Smithsonian, and it’s just a rock. But if you have this rock, you can wrap so many stories around it.

“We do have a New Hampshire connection to one: In Washington, DC, there is a statue called the Black Aggie — it’s a shrouded figure sitting down, nearly 6 feet tall, and there are a ton of cursed stories about it. It got so bad that a graveyard in Maryland kicked the statue out and gave it to the Smithsonian, who kept it in storage. Now they have it in a court building about two blocks from the White House. The thing is, it’s considered a rip-off of another statue, the Adams Memorial. That statue, which some consider to be the best funeral statue of all time, was carved by Augustus Saint-Gaudens. (You can see it at the Saint-Gaudens National Historical Park in Cornish.)

Order “Cursed Objects: Strange but True Stories of the World’s Most Infamous Items,” pick it up at any bookseller and learn more at oddthingsiveseen.com.