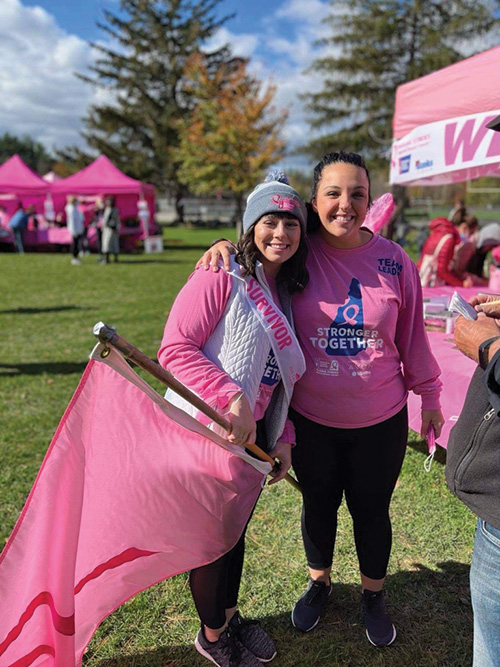 Kayla St. Louis and friends at the Making Strides event in Concord in October 2021.

Like most people in their late 20’s, Kayla St. Louis felt pretty invincible. She enjoyed a life filled with her share of adventures, was very active and enjoyed playing sports like other members of her family. But the Hudson woman would soon begin a new journey whose conclusion was uncertain.

Kayla recalled that she was taking classes to obtain her Esthetician’s license in June 2021 when she felt a strange lump on top of her left breast. She asked one of her teachers to look at it and give her opinion on what it could be. Her mom knew right away it was very serious and took Kayla to Southern New Hampshire Medical Center in Nashua for tests.

An ultrasound and a biopsy later, Kayla learned what she did not want to hear a month later.

“I was at school and on lunch break and that’s when they called me. It was crazy. I didn’t know what to think,” Kayla said. Her doctor told her she was diagnosed with Stage 1, Grade 3 breast cancer on July 7, 2021. “You think you are invincible and then this happens.”

What made Kayla’s breast cancer even more difficult to accept is that it is very rare for women who are in their 20’s to get it. In fact, just five percent of women diagnosed with breast cancer fall into that age group.

Fortunately, Southern New Hampshire Medical Center is affiliated with Massachusetts General Hospital in Boston and Kayla had a team of specialists from Mass General in her corner every step of the way. More tests followed to determine the actual scope of the tumor and to see if her cancer had spread to her lymph nodes. As she learned more about the extent of her breast cancer and what it would take to treat it, “I felt better because it helped settle my mind somewhat.” She also learned about her options.

“I live 15 minutes from Southern New Hampshire Medical Center and it was wonderful to have all resources in Nashua and not have to go to Boston,” Kayla said.

Kayla was told she could have a lumpectomy to remove the tumor followed by radiation treatments and this would give her an 8 percent chance of not having a recurrence. Or she could have a mastectomy. Kayla decided to do a double mastectomy to have both breasts removed with reconstruction.

Kayla had to put her goal of opening her own esthetician business in Hudson on hold so she could focus on her treatment. She had chemotherapy from July 29 to December 16, 2021. Her five-hour surgery followed this year on Jan. 31.

“The most difficult part was no feeling afterwards. You just don’t get feeling back,” Kayla said. “I didn’t have much pain and they said the recovery would be six to eight weeks and by week four I was cleared to do everything.”

Kayla also drew great support from talking with other women who had either gone through breast cancer treatment or were dealing with a breast cancer diagnosis like her.

“They have a Breast Cancer Awareness page on Facebook and there are many women who post about their diagnoses, treatment and advice. I joined that right away and posted my story and got a lot of helpful comments,” Kayla recalled.

Kayla said she had to have more chemotherapy beginning in March that is more targeted until the end of November.

Following her surgery, Kayla, now 30, wanted to get back to work and “feel like normal” as soon as possible. “As soon as the drains came off two weeks after, I went right back to work,” she said. She began a new round of chemotherapy in March.

She opened her new business in Hudson — Annie Lou’s Lashes and Esthetics — in August.

What empowered Kayla just as much was finding ways to help other women who may be facing the same fears and sadness she felt after receiving her diagnosis. Kayla and her family formed a Making Strides NH team that participated in the annual American Cancer Society breast cancer awareness walk on Oct. 17, 2021 in Concord. Kayla said she and the 20 walkers who participated raised $16,000 and were the top team.

Kayla said they used Facebook to reach out to people to request their support for their team. The annual event gives cancer survivors and their families a way to stand up to cancer and help others in need.

For Kayla, early detection, fast action and the quality care and the support she received from her doctors and cancer specialists made all the difference. Now Kayla feels just as vibrant, alive and energetic as she did before her journey began.

“I honestly loved all of my doctors on the Mass General team at Southern New Hampshire, especially my oncologist,” Kayla said. “It was tough, but I had a really good support system.”