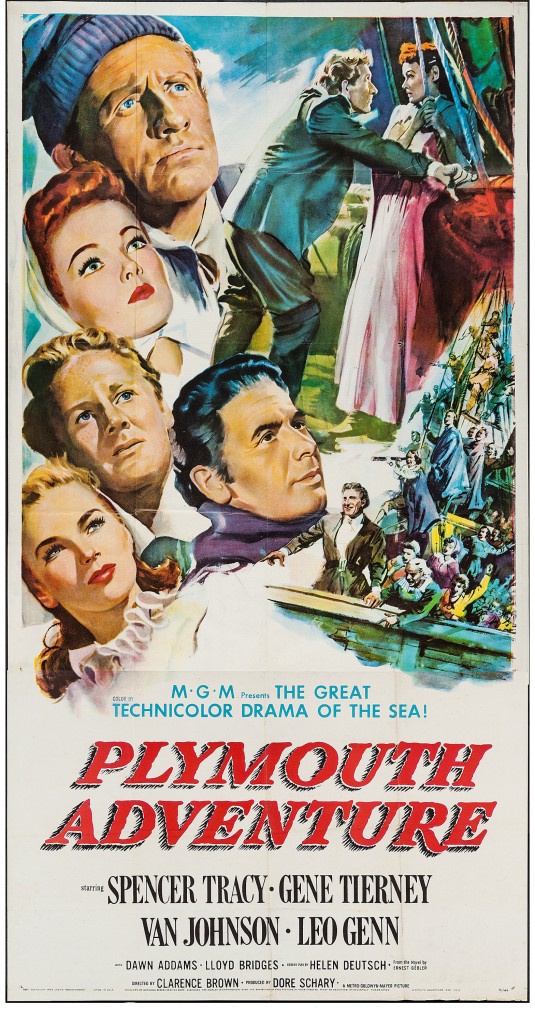 A movie poster for the 1952 film “Plymouth Adventure.” Courtesy image

Get ready to bake a cake and blow up balloons. New Hampshire’s 400th anniversary is only a few months away.

In the spring of 1623, an English couple, their young son, and a small team of fishermen set up a fortified outpost near what is now the Seacoast Science Center at Odiorne State Park in Rye. Compared to the legendary Mayflower landing in Massachusetts three years earlier, our origin story is pretty lame. Within five years David and Amias Thompson (or “Thomson”) had moved to an island in the future Boston Harbor. David disappeared, possibly drowned, and Amias married Samuel Maverick, an English adventurer who ran a trading post on a neighboring island.

Their largely untold story haunts me. Soon after the Thompsons arrived at the mouth of the Piscataqua River, they had a surprise visitor. Captain Miles Standish, the hot-tempered, crimson-haired, vertically challenged military leader from New Plymouth, was at their door. The Pilgrims, he explained, were starving. David loaded his shallop and delivered a boatload of nutritious cod to the surviving band at Plymouth. They held another day of thanksgiving in praise of God’s bounty. “Thanksgiving” for the Pilgrims, by the way, meant fasting, not feasting.

We know this because Pilgrim leaders Edward Winslow and William Bradford published their journals. Their brief mention of Mr. Thompson from “Pascataquack” is among the few clues we have to the puzzling lives of our forgotten founding family. Why did they risk all to settle in the New Hampshire wilderness? (As church-going king-loving Anglicans, it was not for religious freedom.) How did they get along with the indigenous people who had been here for 12,000 years? Why did they abandon their first outpost, known as Pannaway, for Boston Bay?

I’ve been studying the Thompsons for almost half a century. What I’ve learned will appear in a new book titled “1623,” due out next spring. You’ll be amazed to discover, as I was, the other guests who took shelter with the Thompsons in a house mounted with cannons and surrounded by a tall wooden palisade. Winslow and Bradford, the Pilgrim Fathers who gave us the Thanksgiving story, both stopped at what is now New Hampshire on their way to Maine. 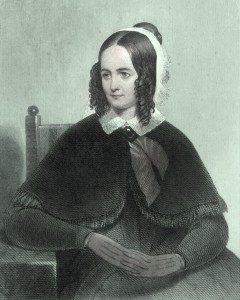 Newport is the home of a 19th-century cross between Martha Stewart and Oprah Winfrey. Sarah Josepha Hale changed the country’s culture with her powerful influence on domestic fashion and taste. She was the first female magazine editor, heading the pre-Civil War era’s most successful women’s publication, Godey’s Lady’s Book, where she wrote about women’s fashion (her coverage of Queen Victoria’s white wedding gown helped set white dresses as the norm), women’s duties, and the importance of women’s education. She also wrote editorials promoting the idea of establishing Thanksgiving as a national holiday, which ultimately inspired President Abraham Lincoln to formally establish Thanksgiving Day in 1863. Our “Mother of Thanksgiving” also provided instructions for celebrating the new holiday, including a description of a New England Thanksgiving dinner, the blueprint we still use today.

Another visitor, Thomas Weston, was the London merchant who brokered the financial deal between the Mayflower passengers and the English investors who hoped to profit off the colonists of New Plymouth. Weston, for the record, became an enemy of the Pilgrims. In 1623, Weston’s ship wrecked near Hampton, New Hampshire. After being “plundered” by Natives and stripped of everything but his shirt, he found his way to Pannaway. The Thompsons, Bradford wrote, kindly “clothed the naked Weston.”

Much of my research for “1623” comes from reports first published in the 1600s. It’s tough reading. I also extracted forgotten details from scholarly articles by 19th- and 20th-century historians — an excellent sedative for anyone who has trouble sleeping. To liven things up, I rented the 1952 Technicolor movie classic, “Plymouth Adventure.” It stars Spencer Tracy as a mean-spirited, sour-faced version of Christopher Jones, who captained the original Mayflower.

The film hints at the dark, damp, smelly, claustrophobic life of 102 passengers trapped below decks in a tiny ship for 10 weeks. The special effects, including a model of the Mayflower battling a killer storm at sea, won an Oscar. The movie clarifies that fewer than half the passengers were religious Separatists. (They called themselves “Saints,” not “Pilgrims.”) The rest were nonseparating Puritans, Royalists, servants and sailors, plus a few farm animals. Three women aboard were pregnant and only half the passengers would survive the coming year.

But this is no documentary. “Plymouth Adventure” was based on a romantic novel of the same title that strayed shamelessly from the facts. In his 89th film, Lloyd Bridges plays the bare-chested first mate who despises the strange religious fanatics. As the film opens, the despotic Captain Jones, is smitten by William Bradford’s wife Dorothy (Gene Tierney). She spurns his bold advances in favor of her pious but dull husband (Leo Genn).

“By the time this voyage ends,” Jones warns Dorothy Bradford, “this ship will contain — not 102 passengers and 30 crewmen. It will contain 132 cats and dogs, 132 rutting beasts! It’s the sea that does it, and the closeness, you’ll see.”

“What a foul man you are!” Dorothy hisses in response. 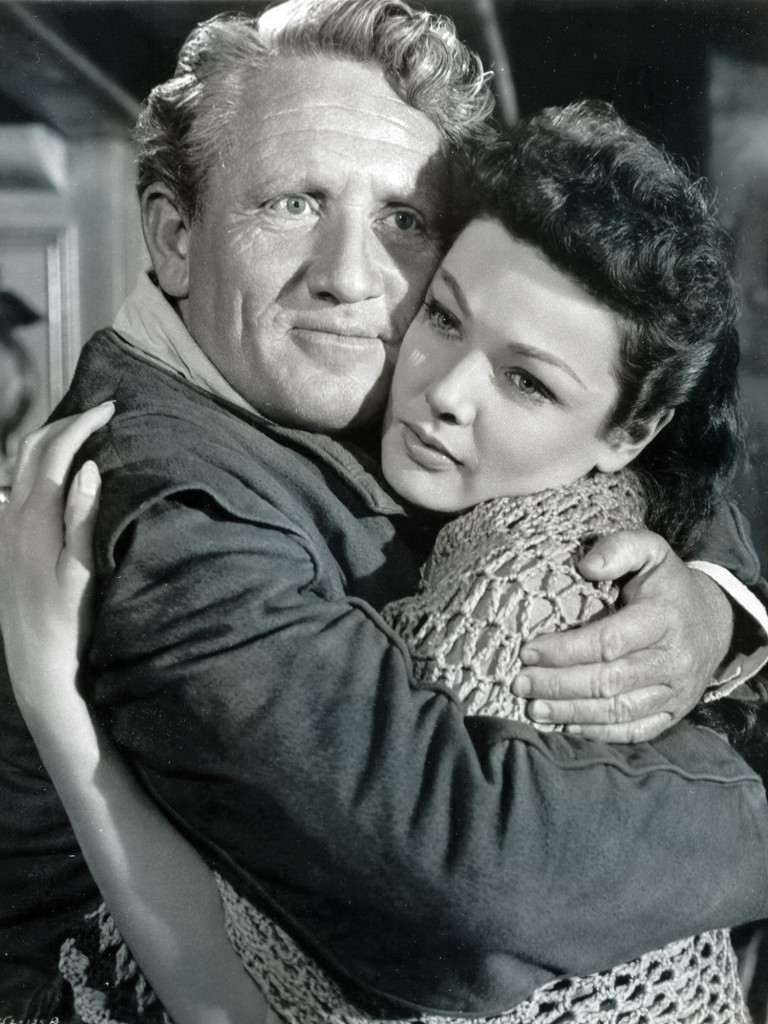 In the movie version, Captain Jones and Dorothy Bradford, after 66 days aboard ship without a bath or a toothbrush, embrace and kiss.

In the movie, the fearsome Miles Standish (Noel Drayton) is reduced to a comic figure. Wearing his helmet aboard ship, Standish attempts to teach the inept future colonists how to load their matchlock rifles. It’s a scene right out of Laurel and Hardy.

In reality, just before visiting the Thompson’s fishing station in 1623, Miles Standish perpetrated a preemptive strike on a group of Natives. Hearing rumors of a possible Indian raid on New Plymouth, Standish invited a Neponset warrior named Wituwamat and his men to negotiate a peace. During a meal, Standish leaped up, grabbed the warrior’s knife, and stabbed him in the heart. Eight Pilgrims murdered six other Natives during the Wessagusset Massacre, a story rarely told in American classrooms. When Thompson delivered fish to the starving Pilgrims a few months later, Wituwamat’s severed head was mounted on a pole atop the fort at New Plymouth.

Pilgrim leader Edward Winslow, who mentioned David Thompson in his journal, stopped at Pannaway in 1626. Winslow is memorable in American history and forgettable in the film. The movie Winslow (Lowell Gilmore) sports a mustache, goatee and long hair. In a striking red velvet suit, he resembles a medieval lord or one of the Three Musketeers. His brother Gilbert Winslow (John Dehner), who was also on the Mayflower, wears a similar outfit in forest green.

In Bradford’s journal, Thomas Weston turned from a Pilgrim supporter to an unscrupulous profiteer. In the film, Weston is a full-on villain played with a heartless sneer by Welsh character actor Rhys Williams. According to history, the Separatists intended to land in Virginia but were forced to settle at Massachusetts due to a late start, harsh weather, bad luck, and rough seas. In “Plymouth Adventure,” the fictional Mr. Weston bribes Captain Jones to dump the religious zealots in New England.

Buoyed by an unsinkable faith and backed by a stirring soundtrack of church choirs, the Pilgrims arrive at Cape Cod as winter closes in.

Forty-one white males signed the Mayflower Compact, a document that is too often compared to the Declaration of Independence. (It is signed by “the Loyal Subjects of our dread Sovereign Lord King James.”) In the movie, Captain Jones watches all this happen and his heart begins to soften. But as Bradford, Standish and Winslow leave in a small boat to find a suitable place to settle, Captain Jones makes a final play for Dorothy.

“No, no!” Dorothy cries and, after 66 days aboard ship without a bath or a toothbrush, they embrace and kiss. It is a cringeworthy moment, but it gets worse.

“This is wrong,” Dorothy says, pulling from the captain’s embrace.

“It’s just as wrong living beside him and thinking of me,” the captain replies.

While her husband was exploring the coastline, the real Dorothy Bradford fell from the Mayflower and drowned in the frigid waters of Provincetown Harbor. Speculation that she jumped to her death has been whispered ever since. In 1869, a short story in Harper’s Magazine titled “William Bradford’s Love Life” implied that Mrs. Bradford was distraught over her affair with Captain Jones. That salacious bit of fiction found its way into the 20th-century novel that became a film.

Instead of returning immediately to England as planned, both the historical Christopher Jones and Spencer Tracy chose to anchor the Mayflower off New Plymouth during the first deadly winter. In the movie, when Lloyd Bridges threatens to lead the crew in a mutiny and head home, Tracy beats him senseless with a belaying pin.

“Plymouth Adventure” ends as Captain Jones departs in the spring of 1621. Amid a manly moment, Jones tells William Bradford, “She never betrayed you.” Bradford sobs. Their hands touch. Jones stares at the horizon and promises to return with more settlers to build a new nation. (He never does.) Back on the iconic tall ship, the captain fires a farewell cannon salute. The orchestral music swells as the Mayflower sails toward an azure sky.

David and Amias Thompson will never have a national holiday or their own theme park. They will not be pictured on Hallmark cards or portrayed in grammar school
plays. But there are worse things than being forgotten, like being the subject of a Hollywood movie.

J Dennis Robinson is a popular lecturer and the author of countless articles and a dozen books about New Hampshire and Maine. His hardcover history of Portsmouth’s landmark Music Hall and others can be seen at JDennisRobinson.com online.