Visit the White Mountains Attractions Association and then stop by the Lost River Gorge & Boulder Caves. 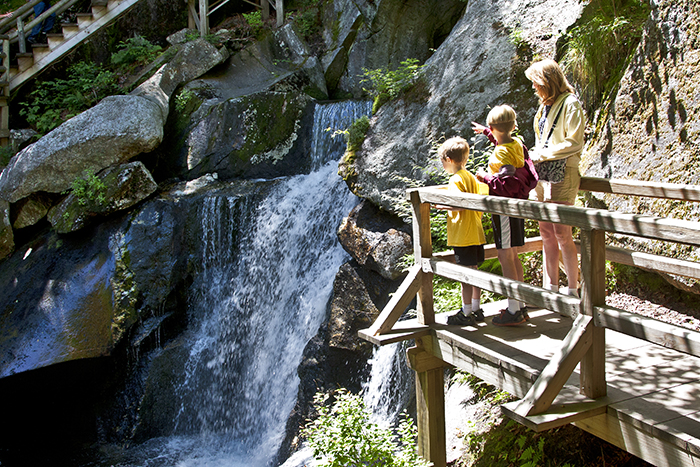 I admit to being a bit surprised when I looked at a map and saw the actual boundaries of Woodstock. In my mind it consisted of the two roads, US 3 and NH 175 paralleling each other on either side of the Pemigewasset River, with I-93 crisscrossing along all three. The town was both smaller than I had imagined, and larger. Instead of long and narrow, it’s almost square but for a chunk taken out of the western corner by Warren. Its borders reach a lot farther west than I thought, all the way to Kinsman Notch. And most of the part north of the Route 112 intersection in North Woodstock is part of Lincoln. Who knew?

In my defense, most of the town is inaccessible by road, being part of the White Mountain National Forest. All, in fact, except the eastern corner along the Pemi and a short stretch of Route 112 to the west along Moosilauke Brook. Even the tiny eastern corner that extends across the Pemi reaches into a tract of National Forest.

The first stop in North Woodstock — and in the White Mountains — should be right at the northbound exit of I-93, on the Kancamagus Highway. The White Mountains Visitor Center is a one-stop source of everything White Mountains, from information on trails and campgrounds in the National Forest to details on mountaintop rides and children’s attractions. Exhibits inform about flora and fauna and White Mountains history.

For all its being in the center of the White Mountains, Woodstock has few peaks of noticeable height. The only 4,000-footer is Mt. Jim, barely on the list at 4,180 feet. The Appalachian Trail climbs over its shoulder after crossing Route 112 at the top of Kinsman Notch. For a short (less than ½-mile) climb to the steeply tumbling Beaver Brook Cascades, follow Beaver Brook Trail to the left.

A number of brooks originating high in the National Forest on the south side of Kinsman Notch merge and finally join to flow into the Pemi in North Woodstock. So it’s not surprising that several of the town’s attractions are connected to these watercourses. The best known, at Woodstock’s western edge, is Lost River Gorge & Boulder Caves, where giant boulders form tunnels and caves that hide whole sections of Lost River as it drops through the precipitous deep gorge. It emerges to plunge over ledges in cascades and waterfalls that have carved potholes, like giant cauldrons of swirling water. Largest of these is the Giant Pothole, which at more than 60 feet is one of the deepest known in the United States. If you haven’t seen Lost River this year, you should go to experience the new 750-foot-long boardwalk trail through the woods to the Forest Treehouse. Get a new perspective on the return, crossing the 60-foot-long suspension bridge for different views of the gorge and Kinsman Notch.

After all this falling and burrowing, Lost River emerges to flow more peacefully alongside Route 112, through Lost River Valley Campground, a privately owned campground surrounded by the White Mountain National Forest. The 125 well-spaced riverside campsites and camping cabins are screened by forest and are especially appealing to families. There are kayaks and paddleboat rentals, tennis and badminton courts, basketball, volleyball and a sandy beach. Younger kids can “sail” a wooden ship across the manicured lawns, play engineer in the wooden train in the playground or splash in the brook under a mini-waterfall among the sculpted rocks.

Lost River joins several others to form Moosilauke Brook, which carves another scenic gorge with big potholes, alongside Route 112 as it leaves the National Forest, close to the intersection with Route 3.

Smaller than Lost River but still impressive, Agassiz Basin is also known as Indian Leap because of a local legend that leaping across it was a test of courage for young braves. No thanks. Be careful here, and admire it from the top, as the rocks are steep and there are no handholds.

A more user-friendly spot to enjoy a river is in the center of North Woodstock at Cascade Park. There’s a small pavilion and picnic area, and older kids will enjoy tubing (BYO or rent one across the street) down the cascades through the chutes worn by the Pemigewasset as it rushes over the granite ledges. Much smaller here, the Pemi is barely more than a brook (except in the spring melt-off, when it becomes a raging torrent) before it’s joined by the larger East Branch just a short way downstream. Cascade Falls has the appeal of an old-fashioned town swimming hole, which it is.

Directly across Route 3, which is the town’s Main Street, stands Cascade Lodge, our favorite of the several buildings that make up the lodgings at the Woodstock Inn. Handcrafted rustic furniture like the king-size beds of peeled logs, rich fabrics and museum-quality Arts and Crafts reproductions give the rooms the look and feel of an Adirondack lodge. Most have whirlpool tubs, gas fireplaces and heated bathroom floors (as any well-bred rustic cabin should).

The inn’s full name, Woodstock Inn Station & Brewery, indicates the full extent of this hospitality complex. The inn has been there for a long time, eventually expanding to include The Station, a casual restaurant housed in the former Lincoln railroad station. Neighbor Jim Fadden and his crew sawed it in half in order to move it here from Lincoln.

Fadden’s is a name you’ll hear if you spend much time hanging around North Woodstock. He’s the fifth generation of Faddens to tap the trees of their maple grove, about 1,000 feet up the western slopes of the Pemigewasset Valley. In the winter he boils the sap in a sugarhouse on Main Street, just down from the inn and next to Fadden’s General Store. Half country store and half maple museum, Fadden’s sells the syrup year-round, along with sundry other White Mountains products. If Fadden is there, the stories he spins are priceless.