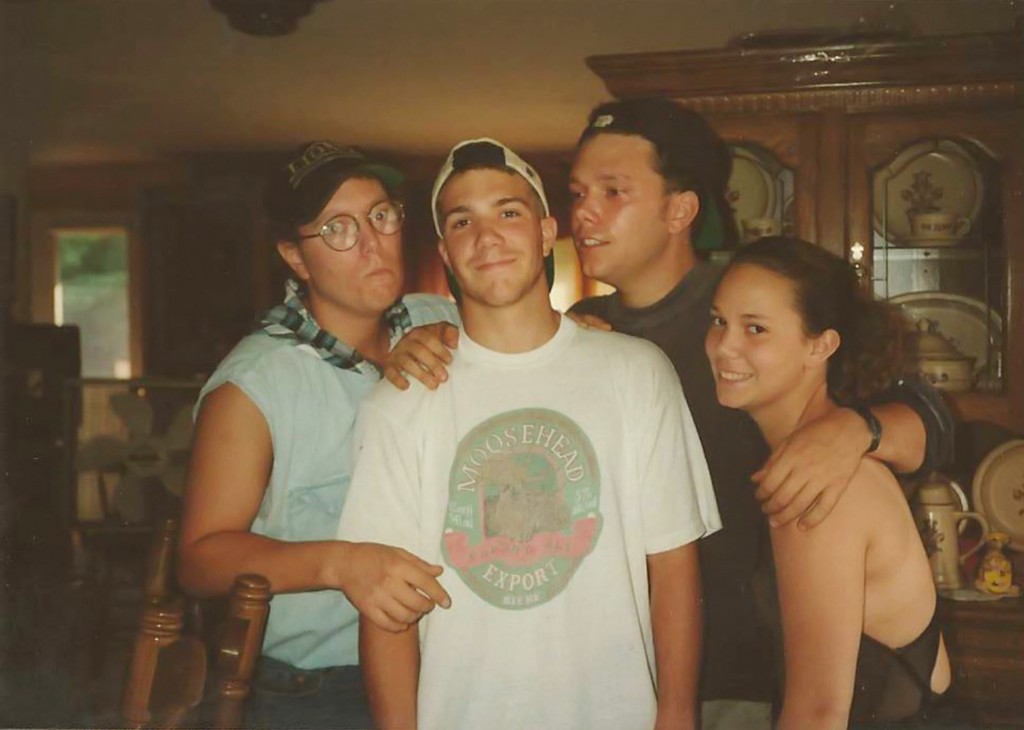 This photo was taken in the same house where the donuts were first made and became legend. From left to right: Older brother Brian, younger brother Josh, the author Chris and youngest sibling Liz. Courtesy photo

Teenagers are hungry. Always have been. I don’t care if they’re sequestered in their rooms perfecting a TikTok hip wiggle, or sweating the fact that B-Dog left them “on open” on Instagram, these peeps gotta eat. It never ends. Even when I was a member of this narcissistic glamour tribe way back when, I was always starving. Problem was, I didn’t have much food to fill the hole.

Now, before you run off and tweet a message of ersatz compassion (#thinkingofyou!), please know I wasn’t squalored into some back alley or collecting rainwater in discarded jugs. I grew up in Exeter. Lived in a house. I had a mom. She worked hard, but raising four kids on her own was exhausting and not exactly in line with those infomercials we watched late at night that promised vacation homes and a driveway full of sports cars.

We heated bathwater on the woodstove. And the wood itself was delivered to us in frozen green piles that had to be defrosted next to the stove; we were all careful when traipsing into the living room in dry socks. Life, for some years, was hard. Not unmanageable, just … hard.

And then there was the food. My mom’s Irish, so that’s already strike one. But she had to be extra frugal when she did her once-a-week shopping at Market Basket in Stratham. She had to design everything she bought to last until next Sunday’s trip, which meant seven precise dinners for five people and not much money left over for anything else.

Sometimes, we enjoyed an unexpected bounty, like the time my mom had a friend leave a bag of frozen Kentucky Fried Chicken outside the restaurant near the dumpster for her; that night, we all feasted unabated, floating the high seas of a luxurious food coma. Other weeks, my mom might have a little extra cash and would buy a package of cookies.

Yet having sweets in the house created a whole new torturous dynamic because they were for After. Dinner. Only. On school days, we all abided by a singular rule: No Eating the Food Without Asking. Asking really meant no. And breaking the rule was suicide: My mom might have been a little woman, but she sure could pack a punch. So to have those cookies staring us in the face at 2:30 on a Tuesday was maddening. At age 13, I could eat an entire bag of Hostess powdered donuts and lose 3 pounds. My older brother Brian lifted weights and believed in Lou Feriggno, so he was in a similar predicament. My younger brother Josh was 8 and baby sister Liz was 6, so I didn’t really think about them at all.

To top it off, we lived in the boonies and there wasn’t a store for miles. The situation was untenable; I had to figure out a way to obtain contraband snacks without getting us all killed.

So I signed up for cooking classes in high school. I learned about béchamel, pastry and nonleavened cakes. I made stroganoffs and roast turkey soups and orange-glazed baked hams. And I always brought the leftovers home. Not only that, I pocketed the recipes. This, as it turned out, proved genius.

Because even though my mom watched over the food like a nervous prison guard and knew if we liberated even a single strawberry wafer from its crinkly cellophane wrapper, she didn’t think twice about the bags of flour, granulated sugar, baking powder, Crisco, and little cans of spices sitting unmolested deep in the cabinet.

After school, I began this routine: I’d sift dry ingredients in one bowl and beat my eggs and sugar in another. I’d test the oil with little flecks of dough until it seemed sufficiently hot. I’d carve out some donuts with coffee mugs and use an old shrimp cocktail glass to plop out the center, and then drop them into the sizzling fat. I’d flip them once. Carefully removing each with a metal spatula, I’d drop them one at a time in a paper bag and shake with nutmeg, allspice, cinnamon and sugar. I’d then stack them on a plate like a great, victorious pile. Because in fact, it was.

Next week it’d be apple fritters. After that, streusel coffee cake. Brian, to his credit, always did the dishes. Zero evidence of our crime.

My mom would then come home from work at 6. She’d have her one sanctioned cocktail, make spaghetti and meat sauce, and we’d get through an entire meal without having to explain why someone ate a Keebler Elfwich. “How was your day?” my mom would ask. And we’d shrug, noncommittal: half guilty, half relieved.

Things got better. My mom remarried and her grip loosened in the kitchen. We had ample hot water and better firewood. Dinner became something we looked forward to as our stepdad was a hell of a cook from Kentucky. Cookies gave way to pastries, pastries to pies. Before moving out for good, I think I actually gained a couple of pounds.

Nowadays, I’ll find my two daughters in the kitchen making things like banana- mango smoothies or juicing an armload of kale. “Hey, who’s up for donuts,” I’ll say. And they’ll stop. “Like the kind you used to make when little?” one will ask. And before I can even say yes, they’re already cleaning off the counter and getting out one bowl for the dry ingredients, one for the wet.

Sift together the dry ingredients in large bowl and set it aside. In smaller bowl, beat egg and milk, and then slowly drizzle in melted butter. Some of the butter will harden a bit — that’s OK, no biggie. With a fork, fold the wet ingredients into the dry, and blend and mix gently with a fork until it all comes together into a ball.

Roll the ball out onto clean, lightly floured surface to about ½-inch thick. Cut out donut shapes with a donut cutter or biscuit cutter or, if you’re feeling adventurous, with a coffee mug. Use a shot glass or any kind of cup that’s about 1-2 inches wide to cut out the center.

Heat oil in deep, thick-bottomed pan until it reaches 375 degrees F on a candy thermometer or, like me, wing it and drop little bits of dough in the oil until they bubble and turn golden brown. Carefully lower a donut into the oil with a metal spatula. Fry until the donuts float and then flip, about 3ish minutes total. Drain on paper towels.

While still warm, place them in paper bag with ½ cup white sugar, 2 teaspoons cinnamon and a dash each of allspice and nutmeg. Shake very gently so they don’t break, but do get them covered in sugar and spices. Take out the donuts and stack them into victorious pile. When done, fry the little dough centers into tiny donut balls.

Enjoy, and don’t tell your mom.

Spice Up Your Christmas Dinner with Thai Ham Fried Rice

Quick and Easy Recipes for a Lovely Valentine’s Brunch

Recipe: Make Your Own Cider Donuts