Godsmack’s Sully Erna on the Miracle of Music

New Hampshire Magazine Editor Rick Broussard interviewed Godsmack front man Sully Erna in May 2020 for a feature on Sully and his “Unforgettable” music video for the August 2020 issue of New Hampshire Magazine. While we were only able to fit a limited amount of the interview in print, we’re happy to share with our readers the full interview. 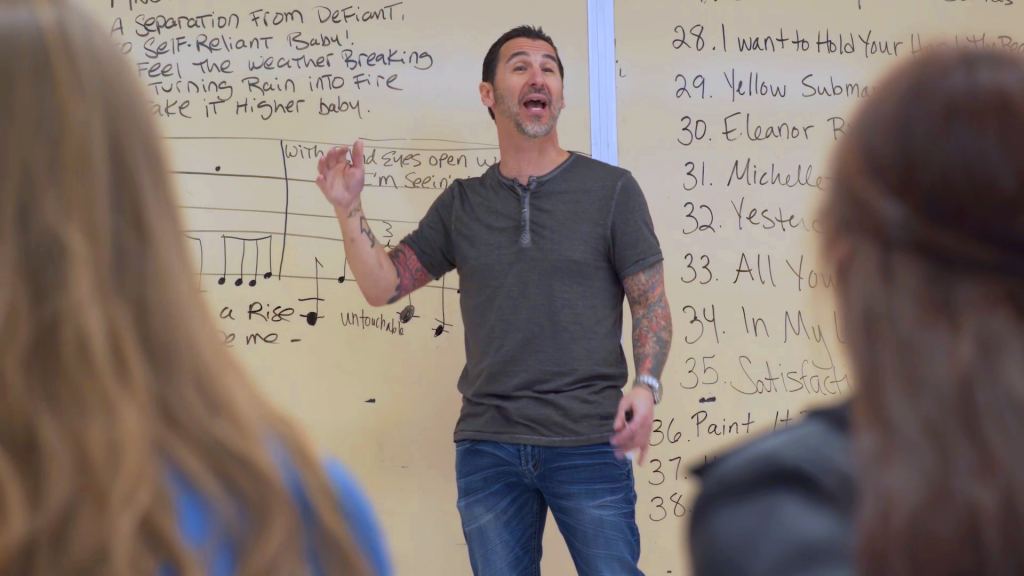 With four No. 1 singles off “When Legends Rise,” Godsmack is bigger than ever, even after a couple of very successful decades in the business. Did you plan any of this out when you were young?

Oh no. I didn’t even know what success meant, growing up. I was growing up on the streets of Lawrence and we barely got by. We were raised on powdered milk and food stamps. I was taught how to survive, not how to be successful, but part of learning translates later into being successful because it teaches you how to go through the hard times and still stand up and walk through it another day.

The band has held together through a lot of change.

Shannon [Larkin] is the newest member. He’s been with us 18 years now. We get along better now than we ever have. We got over those hurdles, challenges and obstacles along that way that almost broke us up so many times. Now we’re in such a good place. Our lives have changed so dramatically. Not so much because of the success as because of the lessons we learned going through the grind of it. Now we’re back to just playing music because we love music again, like it was in the garage days. This business chews you up and spits you out and you either survive or you don’t — but once you get past that part, music becomes fun again.

Is your sound changing as a result?

We breached boundaries on this last record quite a bit because we knew it was time to expand and change. We’re all in different places in our lives, not the same young angry punk rock kids that we were once. Along with that comes the new tones and emotions in the music. Doing a lot of the solo writing really helped groom me to get deeper, more emotional — to be a little bit more vulnerable, more humble and transparent. I bring that same method now into Godsmack and it’s why we were able to take a chance with doing some more commercial-style songs like “Under Your Scars” and “Bulletproof.” I mean “Under Your Scars” was a piano ballad. Who ever knew that Godsmack would have a piano ballad? 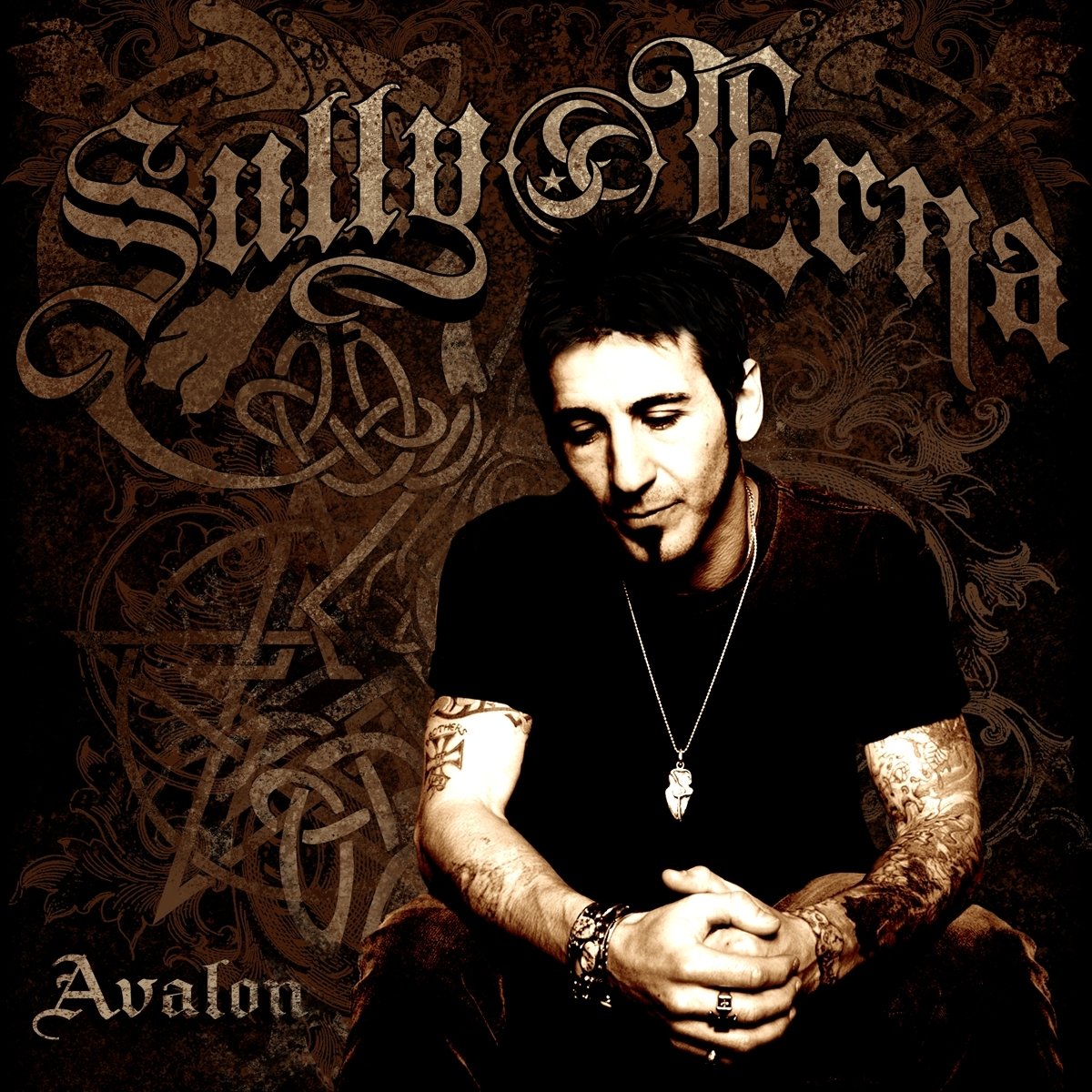 The first, “Avalon,” released in 2010 had been in the works for about seven years and allowed him to blend tribal and Middle Eastern musical motifs with his soul-searching vocal to create a spiritual tone-poem designed to haunt the listener long after the needle is lifted from the groove. It also allowed him to partner with some musical friends from his home state of New Hampshire like Lisa Guyer, Chris Lester, Dave Stefanelli (all from uber-popular Mama Kicks) and multi-instrumentalist Chris Decato. 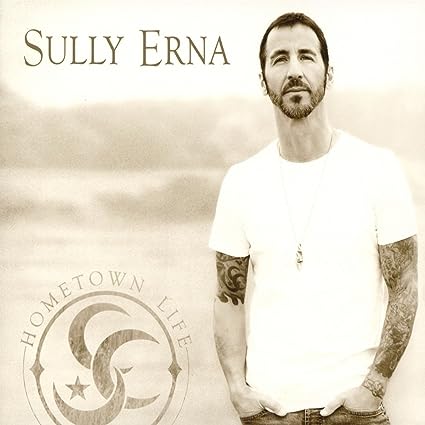 That basic formula continued on his second solo effort in 2016, “Hometown Life,” but with an even more eclectic array of musical styles in play. A third solo album was already in the works when Godsmack’s “When Legends Rise” was released in 2018.

You talk a lot about the power of music. How can sounds on a record make you happy or cry?

That’s the mystery of music. It’s about vibrations, because music is built up of vibrations. You don’t hear music, you feel music. You hit a drum head and it vibrates, a piano string vibrates, a guitar string vibrates, your vocal cords vibrate. That’s what creates sound frequencies. If you keep breaking down what music is and know it’s nothing more than vibrations, then why does it create emotion? That’s the miracle, the gift of music. That’s the part we may never understand, because we’re not God.

How does music help a kid like you growing up in a rough part of a rough city survive?

I don’t know all the answers to it, but I do know that because music affects you on an emotional level it heals you. It’s been proven that certain tones and frequencies calm people down, make them relax or wake people’s psyches up. Scientists are studying this and trying to figure it out, so I don’t have all those answers, but I know that music is a healer. It’s an escape and, if you use it the right way, you can use it therapeutically, for medicinal purposes, as well as for entertainment value.

So music can literally heal you? How does that work?

So many mysteries around that. Biology itself is a mystery. The human body is one of the most ingenious inventions ever created. That goes pretty deep down the rabbit hole — why vibration and frequencies mix and clash and blend together start to stir up these neurons and whatever else there is in our bodies that makes us tick and creates emotion. I can’t answer those questions but it’s the thing that baffles me and intrigues me that makes me love music because I know there’s something deeper to it.

Why did you settle in New Hampshire?

It was just a nicer place to move to once I was able to move. Didn’t want to stay in the city. Too many problems. I don’t want to become a product of my surroundings like I was when I was younger.

I’m still so close to Boston, my roots and the things I enjoy. I’m not a big fan of winter, so how I’ve survived this long I don’t know, but I do like New Hampshire. I like having the freedom and the space to walk in the woods, quiet and protected. That makes life more calm and enjoyable for me. The first half of my life was like living in a tornado.

You don’t seem to take your success for granted. What made you want to use it to inspire kids?

We’re all put here to have some kind of voice on this earth. Heart surgeons do it through their talent of saving lives and letting those people tell their stories for years to come. Actors do it too, through their acting. Painters do it through their art and musicians through their music. We’re all put here for a reason. We’re not sure what that reason is, but once you identify what your job is on this planet you should just do it the best you can and not try to be a restaurant owner when your thing should be writing music. It’s a gift and obviously you’re chosen to speak through it and use it as an outlet.

The range of music you’ve written is pretty vast and eclectic. What are some of your songwriting influences? 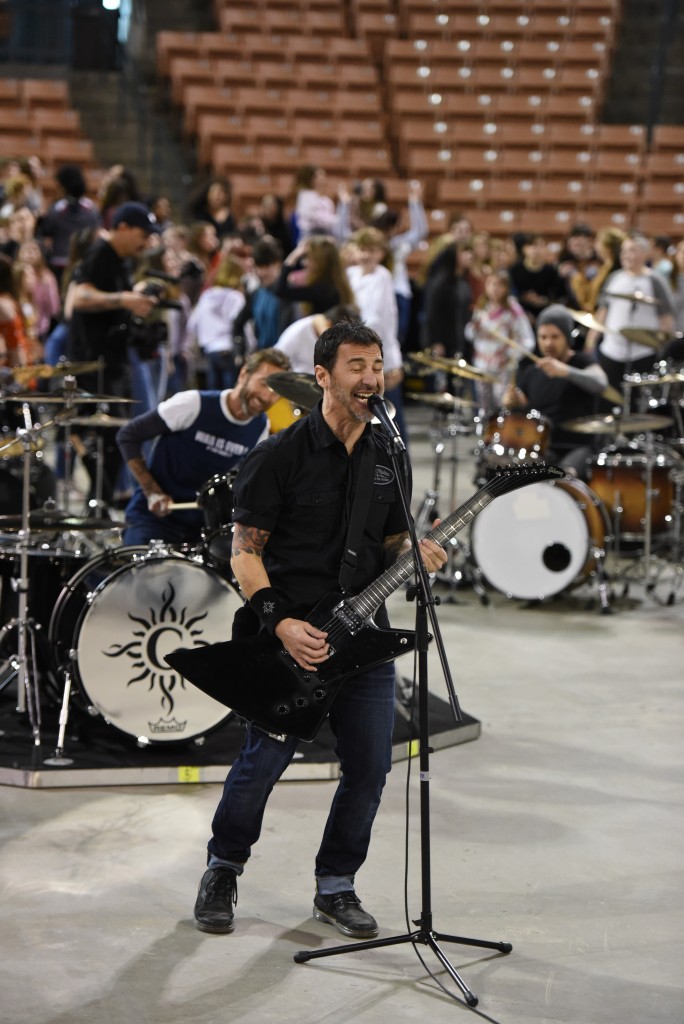 Sully, Godsmack and hundreds of New Hampshire student musicians got together at the SNHU Arena in Manchester to work on the “Unforgettable” music video. Photo by Renée Deal.

At first I was just a drummer and joined bands and played cover songs. That’s what sucked me into wanting to play music — because of the feeling I got from being a musician and playing those songs. That’s a drug in itself. That evolved into my becoming a songwriter but not really knowing HOW to write songs. Just trying to come up with an arrangement that’s complete, you look to your mentors along the way, your Steven Tylers, your James Hetfields — different people you grew up with or were influenced by. Then you start to mold your craft a little more because you go “Oh, that’s how they did it.” At some point it takes on its own energy and its own form.

For me, the transition really happened when a friend of mine took his life, when I was much younger. I found myself writing my feelings down on a piece of paper one day and trying to get inside his head and feel what kind of pain he was in for him to actually commit that action. I thought I’d felt pain but I couldn’t imagine what he was feeling — to not even want to be here anymore, to do that. I wrote down all these feelings and it took me into creating a song called “Another Day.” To this day, I’ve never recorded it, but it helped me feel better once I got it out.

You never recorded it, but that was the start for you?

That’s when the light went off. That’s when I started to open up and dump everything out. The early Godsmack stuff is all about my life story and has been even up to this record, so you can really follow my life’s progression through the Godsmack catalog into the solo stuff and back to where we are today.

Is there a philosophy that runs through your music?

No. I just speak from the heart. It’s very raw. It’s very vulnerable. It’s very open. It’s just how I feel in that specific situation.

Why the emphasis on music education?

We’re talking about how special music is and what a gift it is and how we should never take it for granted and yet it’s the first program that gets cut in schools when they have to trim some money off the budget. That makes no sense to me. If we can convince people that music is this special gift from the universe, something we don’t fully understand but that heals us, makes us feel great, is always there for us when we need it, never asks anything in return, just like the gifts of hearing or touch or smell. It becomes like food and water, a real necessity, so why would you take that away from children? Why wouldn’t you instill that inside of them. They don’t need to know trigonometry when they leave high school unless they are going to be a rocket scientist at NASA, but music they’ll use every day. Whether they create it or listen to it, it’s going to help them focus, help them heal, take them on journeys and give them an experience. I think that’s important.

Sharing a favorite musician or album with a friend is kind of like sharing treasure. Who are your favorites, artists you’d want to turn someone on to?

I always find myself listening to the classics. I’m still a vinyl record listener, I love my vinyl records.

If people are really influenced by music the way I am and they want to create it, I always tell them to go back to the roots. The biggest innovators were the ones passing the music around for us. They mentored us. Everyone from Elton John to Ray Charles to Janis Joplin or Jimi Hendrix for the guitar players. Go back to the roots because the roots paved the way for us. And even beyond that, if Ray Charles is one of your favorites, search who HE was listening to and go back to some of early guys that were out there. You can go down that rabbit hole all the way to the beginning.