From Shock to Advocacy: Success Through Teamwork 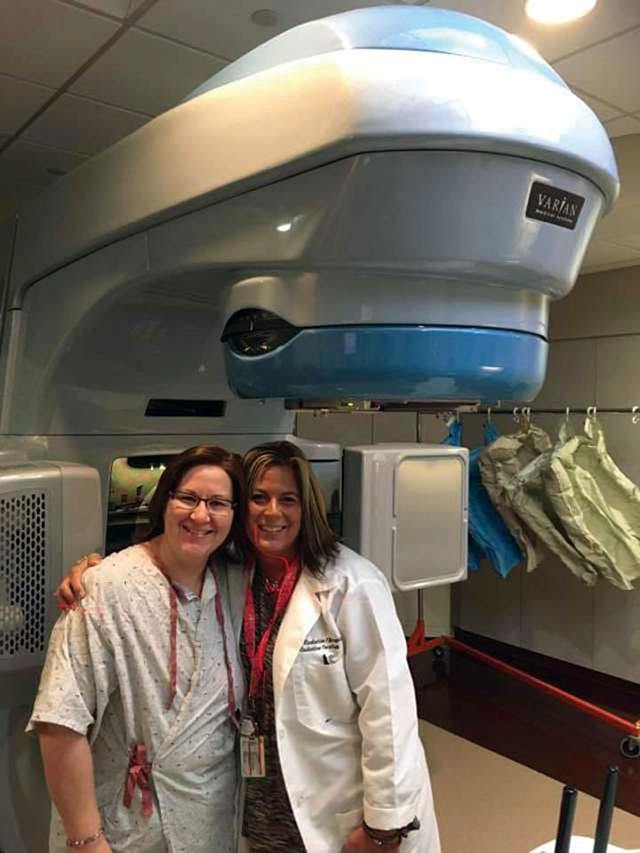 Jennifer Hammons grew close to the team of experts who helped her through her breast cancer journey. (Courtesy photo)

On that winter day she was continuing an ongoing effort to get healthier, spending part of the day at the gym with her daughter and a friend. It was also the day — and location — she learned she was diagnosed with stage three breast cancer.

Hammons was on the treadmill when her doctor called to deliver test results.

“At the time, I couldn’t have a reaction,” she says. “I didn’t want my daughter to know what was going on. I started texting my friend – who was standing right next to me – but I didn’t want to say anything out loud.

“There was a lot of crying after that because we had just lost my dad six years prior to cancer. My first thought was that I wasn’t going to be here to see my daughter grow up.”

After letting the news sink in, she knew she had to tell her family.

“I was sitting in her (daughter, Amanda’s) bedroom,” Hammons says. “I said, ‘I have to tell you something. Mom has cancer.’ The first thing she asked me is if I was going to die like grampy did. That broke my heart, but what do you say to your then-16-year-old? That was a difficult conversation to have.”

In retrospect, Hammons has learned a great deal about what she could have said. While it’s not a club anyone wants to belong to, she has become an expert in the initial shock, the struggle and life after recovery.

The first piece of advice: know when something is wrong. For Hammons, it was an unusual dimpling on her right breast. She had begun losing weight several months earlier, and her doctor initially thought it was a redistribution of fat. An ultrasound, mammogram and biopsies, however, proved otherwise. Doctors found a six centimeter mass — about the size of a golf ball — which put Hammons on the path of the next phase of her journey. It also taught her how to deal with the information overload that comes with a diagnosis.

“When you go to the doctor’s office, you get a lot of information,” she says. “It’s overwhelming, and you often don’t remember half of what was said. I brought a tape recorder and took people with me who wrote down questions and answers. It was extremely helpful because there are so many pamphlets and so much information that I didn’t know where to go or what to do with all of this.”

Hammons started with chemo, then underwent a mastectomy. She had her right breast and 11 lymph nodes removed, then began radiation treatment. A year later she had reconstructive surgery – a DIEP flap procedure where skin from the lower abdomen is transferred to the chest to reconstruct the breast. (“I call it my belly boob,” Hammons says, laughing. “You have to have a sense of humor through all of this or you’ll drive yourself crazy.”)

She visited the Amanda Thomas Boutique in Merrimack, a shop that provides clothing and hair replacement solutions unique to breast cancer and reconstructive surgery patients. It also exposed her to the compassionate staff there, who helped her through that part of the recovery process.

“They are an amazing group of women,” she says.

For Hammons, the treatment worked. Praising the extraordinary work done at Holy Family Hospital, in Methuen, Massachusetts, and Brigham and Women’s Hospital, in Boston (“A fabulous team of doctors,”) she says she received great care and valuable support throughout the process. Yet she also has learned that even when the news is good, it doesn’t mean things are over.

“I’ve been in remission since October of 2017, but there have been surgeries since then and medications I have to take every day for the next 10 years,” she says. “What I’ve learned through this process is that life doesn’t go back to normal. I assumed it would be like getting the flu — you take some pills, the flu is gone, and you go back to life as you were before you got the flu. That’s not the case with cancer. There is no back to normal. It’s learning a new normal.”

The list of challenges is long. At 47, she’s gone into menopause early, hot flashes are a regular occurrence, and pain is a constant companion.

“I haven’t slept well since I was in a chemo-induced coma,” she says. “The drugs make you tired, but that was the last time I had a really good sleep.”

Her hips hurt constantly, her energy level is much lower and she tires easily.

“Prior to going through it, no one tells you about what happens next,” she says. “It’s not just a case of being in remission and going back to normal. You’re not. I’m stubborn, and I have to learn to do things differently. That doesn’t come easy to me. That’s the part I struggle with currently.”

When she first learned of her diagnosis, Hammons opted to share the news with just a small circle of family and friends. She didn’t want sympathy or special treatment. Knowing what she knows now, however, it’s one part of the process she would do differently.

“I know each journey is different and everybody has different ways of dealing with it,” Hammons says. “But I wish I told people sooner. You’re not going to get a negative reaction. You’re going to get support.”

On the day she learned she was in remission, she visited the Salem Police Department and had a photo taken with a car painted in support of breast cancer patients and survivors.

“I just wanted a picture with that car,” she says. “I posted it to my Facebook page and that was the first day I told everybody what was going on. That’s also when I became involved with the Relay for Life and the American Cancer Society. I wish I had said something sooner and gotten all that support that I didn’t get until I was in remission. It was a case of, ‘guess what I just went through?’

“What came out of it, and my main thing is that you don’t have to go through it alone.”

Hammons has also adopted a new philosophy since embarking on her survivor’s journey.

“Check things off your bucket list,” she says. “You realize life is too short to keep putting things off. We went to Hawaii in February and swam with dolphins and we kayaked under a waterfall. You need to get these things done. Someday has to be now.”