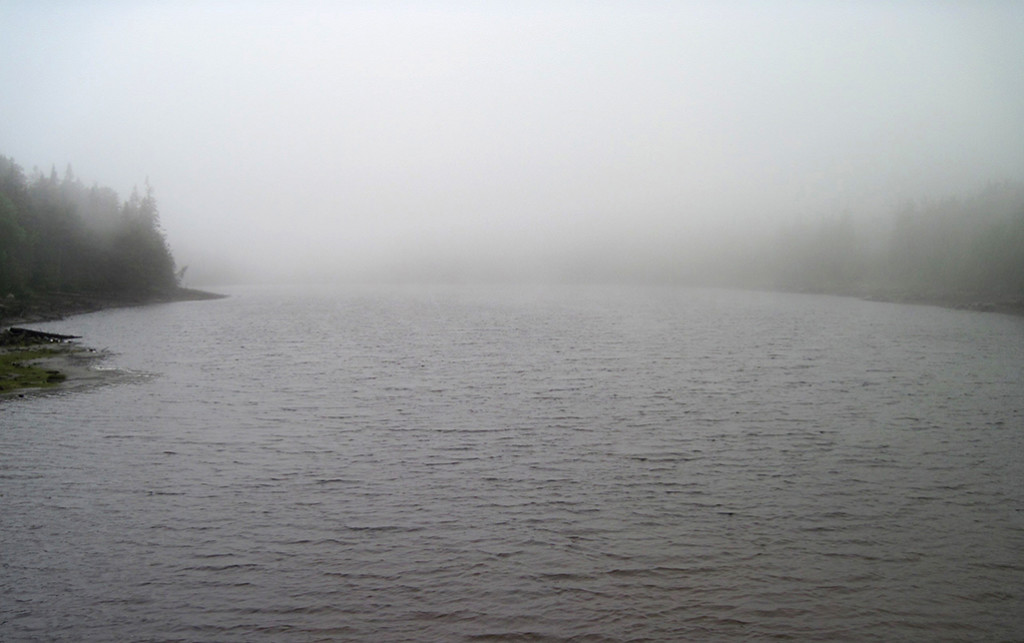 I’m on a haunted lake so I’m half-expecting a ghostly moan or blood-curdling shriek to come wailing across the water. While keeping an eye out for apparitions, I’m searching through the woods looking for the remnants of an 18th-century sawmill.

In about 1780, David Scoby, an Irish immigrant, built a water-powered saw and gristmill on Haunted Lake in Francestown. When Scoby was constructing his mill, he uncovered a skeleton buried in a shallow grave. The skeleton was a tall, well-built man, and thought to be young based on the condition of his teeth. Even before this chilling discovery, Haunted Lake already had a spooky reputation, but neither the skeleton nor the reputation deterred Scoby. He pushed ahead with his plans for a mill, stacking up boulders for a dam, dredging sluiceway channels, excavating cellar holes, and laying up rock foundations.

There are many legends suggesting how Haunted Lake came to earn its eerie moniker, the oldest one being that long before the town was settled, a great forest fire swept around the banks of the pond burning so fiercely that it left only blackened charred trunks of the largest trees standing ashy, desolate and frightfully deformed. The resulting landscape was strange and startling by day and sinister by night. The ghastly appearance coupled with the lack of life around the lake gave cause for early surveyors, hunters and Native Americans to avoid the lake in superstition or dread.

Another legend tells that, in 1741, two young men came to the area looking to buy land and settle. The men were not together, but rather had started off separately, met up, and joined forces as they traversed through the forest together toward the same destination. When they reached the lake, they camped for the night near the site where Scoby was later to build his mill. During the night, for reasons unknown, the men fought and one of them killed the other. In the dense forest far from the reach of the law, the murderer buried the other man in a shallow grave and went on his way. The legend says the murdered man did not rest easily, and for years afterward, he wandered the shore of the lake shrieking and moaning. 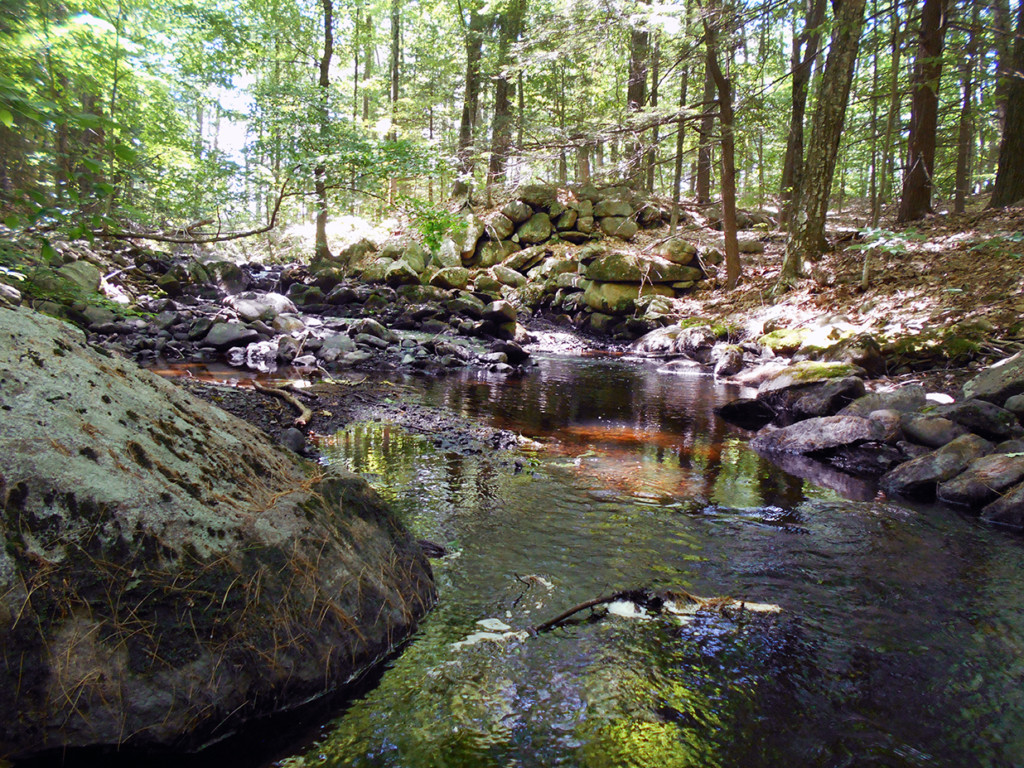 The site of David Scoby’s dam and sawmill as it looks today.

Perhaps Matthew Patten, a surveyor from Bedford, had heard of this murder when he was hired in 1753 to run the Francestown- New Boston town line boundary and survey this area for future farm lots. Patten noted in his diary that he and his team of surveyors camped for the night on the banks of the lake, but were kept awake all night by mysterious groans and screams of anguish as if made by someone in mortal agony. By daybreak the surveyors in his employ had endured enough. They packed up and headed back to Bedford, and nothing Patten could say or do could persuade them to stay and finish their work.

Another story involves two trappers who came up from Dunstable to hunt and trap for the season. The partners set out two trap line circuits, one in the vicinity of Haunted Lake and the other up the south branch of the Piscataquog. Each trapper took one circuit, walking the same lines each morning. They checked their traps and returned to camp in the afternoon. One day, the trapper with the Haunted Lake circuit failed to return and his partner, fearing trouble, set out in search of him. Near the shore of Haunted Lake, he was startled by a fierce growl and saw a huge catamount standing over the dead body of his friend.

The trapper shot and killed the mountain lion. Believing that these cats hunted in pairs, he feared he would soon have to deal with its mate, so the trapper hastily buried his friend and returned to Dunstable. The legend suggests that this story accounts for the skeleton later found at David Scoby’s sawmill.

Scoby had two teenage sons who worked at his sawmill. Since Francestown had little to offer for distraction from the millwork for the teenage boys, they had to produce their own entertainment. As the lake already had a haunted reputation the boys capitalized on it for their amusement. They spooked the town drunk one night and then, flush with their success, started spooking other evening travelers by sneaking around in the woods groaning and rattling chains.

Scoby perished on Haunted Lake in the spring of 1829 at 86 years of age while hauling a load of logs across the ice to his mill. The ice gave way beneath him and plunged him into the icy water. The Scoby family continued to operate the mills a few more years before selling out to a Daniel Fuller. Fuller operated them until about 1860, when they were finally abandoned.

Mapping it out: On older Francestown maps, Haunted Lake is named Haunted “Pond.”

Meanwhile, the lake continued to rack up victims. A 15-year-old boy by the name of Jacob Langdell drowned there in 1810. Another youth, Samuel Allen, followed him in 1816, and Ichabod Gray, a 55-year-old man who was perhaps “deranged,” died in the waters in 1824. He was followed by Nathaniel Aiken, who drowned in 1830.

When the hurricane of 1938 toppled trees all over New Hampshire, the New England Timber Salvage Administration filed a petition with the NH Water Control Commission seeking permission to rebuild the old abandoned Scoby dam on Haunted Lake. A timber crib, rock-filled dam, 6 feet wide and 8 feet long, topped with sandbags, was proposed such that it would raise the water level of the lake 3 or 4 feet for the purpose of storing salvaged logs.

These 1938 documents gave me some clues how to find the old Haunted Lake mill site where so much ghostly trauma had occurred. After more than two centuries, time and nature had obliterated most of the old mill site and dam, but the discerning eye can still find rocks that weren’t stacked by Mother Nature and depressions that are not natural topography. I’d found the old David Scoby dam and sawmill site. I didn’t find any skeletons and didn’t hear any ghosts, so perhaps Haunted Lake is haunted no more.

Categories: Halloween and Haunted NH, What Do You Know