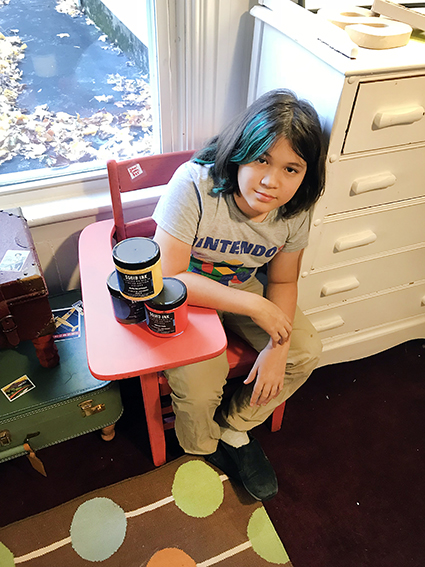 Owen Simoes was just 10 when he opened SquidFlip, his refurbished furniture business, in the basement of his parents’ office at 31 Warren St. in Concord. He loved the HGTV show “Flea Market Flip,” and decided that he could find and fix up some old tables and chairs to sell for a little extra cash. Then, by sheer chance, while poking around at the famous Brimfield Antique Flea Market, he found himself being interviewed on camera by Lara Spencer, the host of “Flea Market Flip.” Spencer liked Simoes’ enthusiasm and encouraged him to try out for her show someday. He was busy creating stock for his shop, but it was something to dream about.

Soon, his combination of adolescent ingenuity and clever upcycles got attention from the Concord Monitor, The Boston Globe, WMUR and NHPR. Then, in October, Simoes, now 12, was invited to appear on “Good Morning America” with hosts Michael Strahan and Sara Haines to demonstrate how he assembles a couple of his popular “flipped” items: suitcase tables and silverware hooks.

The show’s producers had everything set up for him, plus a surprise — out of the wings walked Spencer to join a delighted Simoes for his demonstration. Spencer noted that old suitcases, like the one they were fixing, are often sold for cheap or thrown away. “What I love about Owen is, he’s a recycler,” said Spencer, who gestured toward herself and added, “and he sees the beauty in old things.”

SquidFlip is open most Mondays, Tuesdays and Thursdays from 4-5:30 p.m., and Simoes hopes to find a downtown pop-up store for the holiday season. Find more information on Facebook.