Finding Beer, Chili and Fun At The Powder Keg Fest 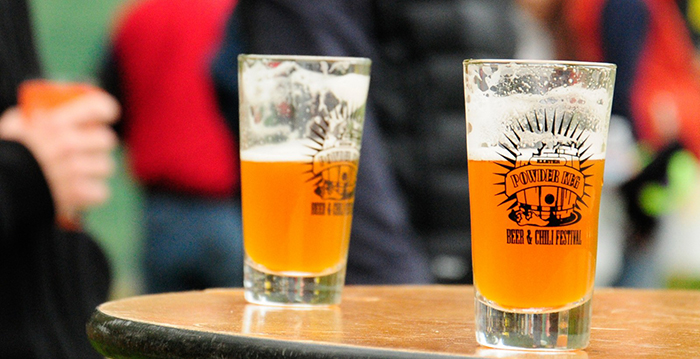 As temperatures drop and leaves start to show their fall colors, there could hardly be a better way to celebrate the autumn season than by getting outside with a cold brew, a hot bowl of chili, and some stellar views of the Squamscott River. Exeter’s Powder Keg Beer & Chili Festival is your chance to do just that.

Now in its eighth year, the event, presented by the Exeter Area Chamber of Commerce and Exeter Parks and Recreation, is a standout among the state’s many brewfests and chili festivals. It has attracted visitors from 16 states and boasts a vendor list that includes more than a dozen restaurants and more than five dozen breweries. According to festival organizer and Assistant Director of Exeter Parks and Recreation Greg Bisson, Powder Keg is “where the foodie meets the craftie” — a collision that ensures there’s something for everyone. These diverse offerings have made the festival a fast favorite, as has its dedication to fostering an inclusive, family-friendly atmosphere.

“This creates a sense of community that makes people feel welcomed,” Bisson says, which has allowed the event to enjoy continued success and expansion each year.

VIP raffle experience tickets are $10 (in addition to ticket price) and include an overnight stay, shuttle ride to and from the event, the perk of skipping the line and a $100 gift card to Sea Dog Brewing Company.

It’s $5 to enter a duck into the 6th Annual Duck Race to benefit the Chamber Children’s fund (or $20 for a Quack Pack of five).

The fest has been increasingly popular each year, and even though in the heat of summer October feels far away, now is the time to start planning your visit. Organizers expect the event to sell out in advance, so, if you’d like to go and haven’t bought a ticket yet, you’ll want to act fast.

More than 100 different beers will be on offer at the festival. Here are just a few breweries on tap for the event, plus you can keep up-to-date as more sign on by following the event’s Facebook page: Banded Brewing Co., Bad Lab Beer Co., 603 Brewery, Pipe Dream Brewing, Jack’s Abby, Bell’s Brewery, Peak Organic, Chapel + Main, North Country Hard Cider and many more. Seacoast-area restaurants will compete in the chili cook-off against a variety of other top-notch eateries from around the state. Come hungry (and thirsty).

In addition to beer and chili, there will also be a variety of other foods to sample and booths to check out. Vendors have included Backyard Garlic, Cabot Cheese, Krave Jerky, Black Mustard, food trucks and Sweet Lydia’s Confections. Stay tuned to see what’s in store for 2019. To top off the day of merriment and indulgence, there will also be live music and other entertainment for you to enjoy.

Whether you’re going for the beer-pairing know-how, the Instagrammable sights on Swasey Parkway, or the excitement of the chili contest awards (one winner planted a kiss on one of the organizers upon learning of their prize three years back), the 8th Annual Powder Keg Beer & Chili Festival is one you shouldn’t miss.

Editor’s note: New Hampshire Magazine is a proud beer tent sponsor for this event. Hey, someone’s gotta do it!