Noodle soup. It’s an age-old comforting remedy, a satisfying meal in a bowl that can be as simple or as complex as you like it.

Ramen has come to be understood as a soup made with ramen noodles. Historically, those wavy wheat-flour noodles came from China, but the dish has been pretty much taken to heart by the Japanese. They even have two museums dedicated to this nourishing staple.

Shin-Yokohama Ramen Museum in Tokyo is a gastronomic tour of ramen varieties throughout Japan. The museum even has something of an amusement park atmosphere. There are nine food stalls in a streetscape styled to look like it is the auspicious year of 1958 — the anniversary of the invention of instant ramen.

The Cup Noodles Museum in Osaka is an ode to the dietary regimen of US colleges — and lots of other folks from around the world. Here you travel through a tunnel lined with the package designs of 800 Cup Noodles and revel in the making of chicken ramen, from kneading the dough to flash-frying it dry. There is even a replica of the original workshed and many nods to the inventor, Momofuku Ando.

Cup O’Noodles may have been the seed, but the variety of ramen has blossomed with variations in complexity of flavor, depending on the care taken with each ingredient.

The noodles can range in thickness and curl. According to the Shin-Yokohama Ramen Museum, wavy noodles are more compatible with lighter soups, and straight noodles are better with thicker soups. Noodles range from freshly made, pre-cooked and frozen or dried. Slightly chewy is a preferred characteristic.

The broth is at the heart of the dish. It’s the umami characteristic that can make a simple bowl of food so satisfying. The Chinese tend to use just chicken bones, but pork or fish bones can also develop into a nice broth, with the latter favored by the Japanese. Other ingredients that help to further define the dish include salt, miso and soy sauce. When done right, a broth is light, buttery rich, and shimmers with oils and gelatin.

Toppings, the elements that really make the soup a meal, can traditionally include some or all of the following — nori seaweed, green onions, corn, a seasoned roast pork called chashu and a soft-simmered egg called ajitsuke. 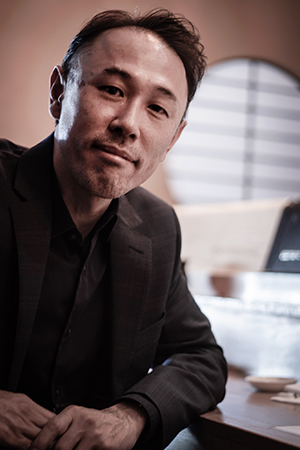 Top ramen spots in the Boston Area. We realize that sometimes you do leave the borders of our great state. If you’re headed south sometime soon, here are a few places to check out, as suggested by Takumi general manager Motoi Nakanishi (pictured).

The egg is often marinated in a mix of soy sauce, mirin, saké and maybe a bit of sugar. The longer it soaks, the darker it will look, but it’s important that the yolk is very soft and close to runny.

The concept of the Ramen-Ya shop started in Japan as a fast-food offering. Most are small stores where you can eat in about 10 minutes. The trend arrived in the US a while back and, like many of these things, it took time for it to make its way to New Hampshire. Happily, Granite State chefs are starting to embrace the ramen craze. While there might not be dedicated ramen shops in every city just yet, varieties of ramen are beginning to appear on menus.

The beauty of ramen is that you’ll never find any two alike. Even in Japan, there are so many regional differences that the soup cannot be contained in a box. In judging ramen, the first test is simply whether it tastes good. From there, I favor a light, yet rich buttery broth and a perfectly cooked, marinated egg. Beyond that, I can forgive unconventional additions, such as shredded carrots or bok choy, as a diversion to a fusion style.

Begin your tour of ramen with the following suggestions: 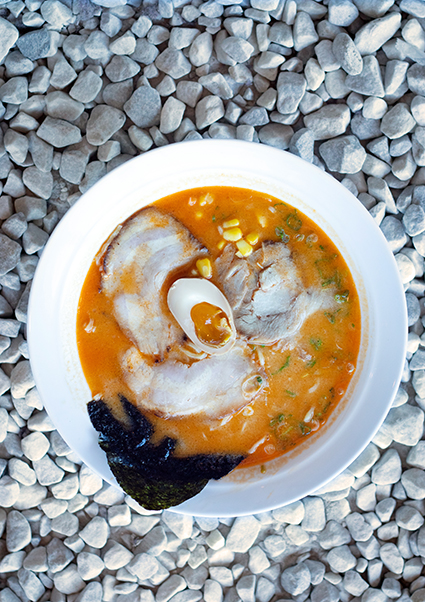 Find authentic ramen (for lunch only) at Takumi in Nashua.

This truly Japanese eatery offers a few ramen bowls for lunch only. The broth is rich, smooth and light in color, as it should be for an authentic bowl. They don’t pretend to be a ramen shop, and confess to buying a Japanese broth made with fish bones. It was the best broth I tasted in my short tour. The Tan Tan version was a nice complement of sesame with a little spice, and the chashu was very tender.

They claim all they add to the broth is soy sauce. Their version would be ideal for vegetarians as it was also topped with a bevy of vegetables including enoki mushrooms. Shrimp, chicken or beef is available too. 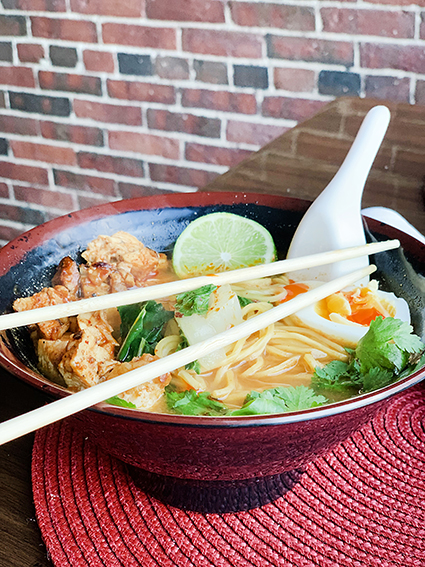 Ramen from Whiskey & Wine in Concord

You You Japanese Bistro

I found a nicely balanced bowl with a thin broth and a perfectly cooked egg. Owner Vincent Woo says that in Asia it’s prepared with an unmarinated egg.

Executive Chef Joshua Gagnon presents a nice bowl with his own homemade broth. When I stopped in, there was a special seafood version made with fish stock. I recommended he make it a staple.

This unpretentious bowl sports a stock light in color and is moderately rich. Moritomo is of the few spots that offer the traditional fishcake, which provides a design element but, frankly, not much flavor. The egg was lightly marinated. 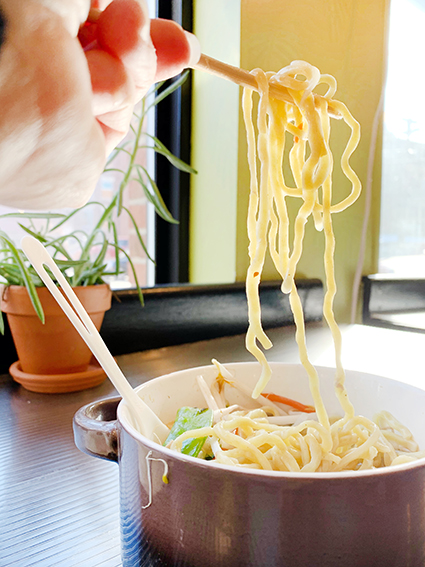 The noodles at Concord’s Noodles and Pearls were some of the best on this tour.

Owner Richard Weisberg does it all. He makes a vegetable broth for the ramen, marinates the soft-cooked eggs and prepares the soup from fresh frozen noodles, which I enjoyed the most on my tour. They were a little fatter than most and had a nice chew factor since they weren’t overcooked, just heated in the broth. The bowl looks a little more like a bowl of pho with all the bean sprouts and shredded carrots, and the eggs were a tad over-cooked. The nice array of bubble tea offers a fun factor if the weather is too warm for soup. 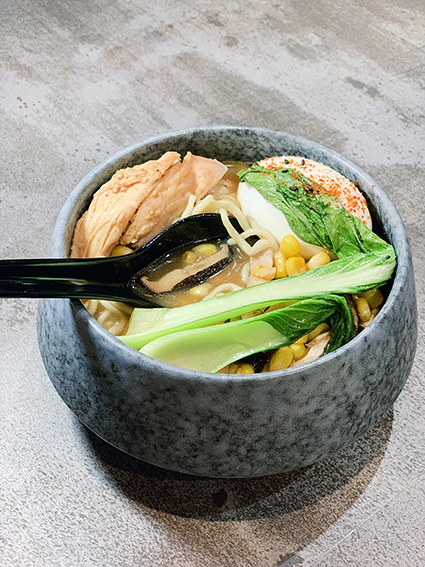 At Noodz in Manchester

Joel Soucy and Chef Nick Provencher offer a variety of ramen in a fast-serve atmosphere. The pork version has a smoky broth and a rich slice of pork belly along with the soft egg, while their miso chicken Sapporo is a chicken broth with slow-roasted chicken, baby bok choy, corn kernels and shiitake mushrooms. They are one of the few shops that use their own from-scratch noodles, which is a nice touch.

Executive Chef Tina Verville is proud of her ramen. It’s a generous bowl with an attractive array of roasted pork, smoked ham hock, egg and Asian vegetables in a flavorful dark broth.

The whole menu here has Asian influence. Former owner Dave Chicane visited Vietnam and enjoyed the vibrant and healthy cuisine that inspired his New Hampshire menu. Current chef and owner Harris Weldon has kept the beat while also maintaining Bantam Grill a few doors down. The ramen bowl is a popular menu item with a rich, dark broth, topped with a very soft egg and strips of pork belly. At $19, it was also one of the most expensive.

Th array of noodle dishes range from stir-fried rice noodles to egg noodles with BBQ pork to udon with fish balls. They offer two versions of ramen, one with a miso base, pork char siu, mushrooms and bok choy and a spicy Korean version with a kimchi base.

Their Kauni ramen has a light beef bone broth with seasoned pork belly, scallions, bean sprouts, mushroom and marinated egg. They also offer a miso base and shoyu with just soy sauce. Try one of the katsu versions with panko-breaded and fried chicken or pork. 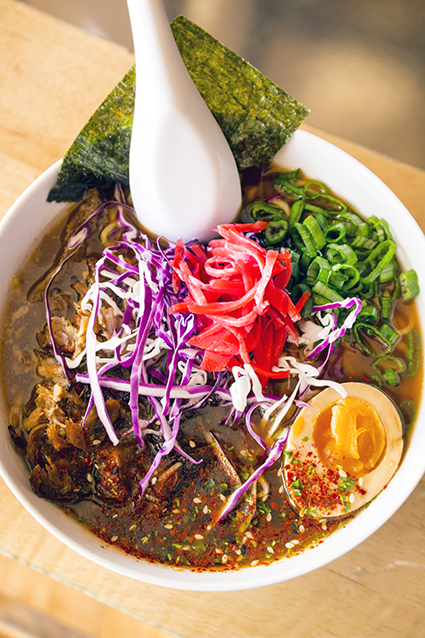 This new Japanese-style eatery is from the owners of nearby Sweet Ginger Thai restaurant. They offer a range of Asian noodle soups, including a pork chashu ramen. It has a lot going for it — a nice flavorful broth mostly from vegetable stock, a tender, rolled chashu and additions of egg, bamboo shoots, mushrooms, nori, sesame, fried onions and scallions. 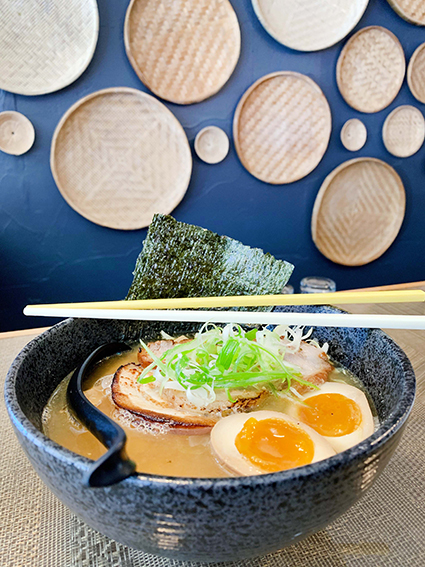 This charming new eatery is located at the former Hemingway’s Restaurant location. The interesting menu features the favorite Asian-inspired foods of chef and owner Toi. High on her list is the Oba ramen with a miso broth, chashu pork, Japanese bamboo, shoyu egg, corn, bean sprouts and scallions. It’s a delightful mix with a flavorful broth.

In addition to a number of dishes where you can choose the type of noodle, the chef’s noddle specials section of the menu has two versions of ramen. The miso broth ramen (spicy or regular) has corn, roast pork, sesame seeds, bean sprouts, chopped ginger, seaweed and scallions. The teriyaki ramen has grilled chicken with teriyaki sauce, bean sprouts, sesame seeds and scallions.