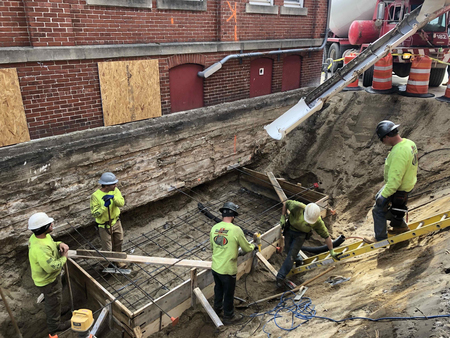 Building on Hope coordinates much more than a cosmetic makeover. With the help of companies like NortPoint Construction, large construction efforts are underway at the Nashua Police Athletic League to ensure the facility can be used for years to come. Photo courtesy of Gary Thomas

Gary Thomas of NorthPoint Construction Management has long been a supporter of local causes — from Catie’s Closet to the Nashua Boys and Girls Club — and when longtime pal Brian Lefabre of Peter’s Auto Group invited him to help with the Nashua Police Athletic League project, the answer, Thomas says, was easy. “I need to support my old stomping grounds,” he adds.

Teaming up with designer Deb Lambelot, with whom he had worked on a residential design in the past, Thomas decided to “take our involvement beyond our three rooms,” he says. This includes pouring concrete for pads, creating and working daily punchlists, and avoiding those last-day “what are all these pieces of blue tape?” moments.

When asked why a company doing many millions of dollars in business a year would care about this project, Thomas simply says, “You try to make things better because the kids will be a product of their environment, with or without places like the Nashua Police Athletic League.”

When further pressed for details, he confirms what I already knew about projects like this — it’s all about outreach. Jay Lehtonen from JET Concrete, and Claude Turcotte and Tim Hatch from Legacy Wall Systems, and Pete Johnson of Johnson’s Electric, all stepped up to make this vision a reality. The basketball team from Rivier University and the members of the Nashua Police Department also contributed many hours to help complete NorthPoint’s piece of the pie.

Not surprisingly, fundraising has been a challenge this year. As has been recruiting for any charity projects.

“This year was a bit of a struggle as opposed to [previous] years,” says Thomas. “Many companies and folks that wanted to help couldn’t.” Beyond the economic impact of the pandemic, concerns about spreading infection necessarily prevented others from joining the effort. Thomas recognizes this, adding that many would-be volunteers are caregivers for vulnerable children and parents.

The challenges of COVID-19 persist. Folks showed up at odd hours just to work alone, other people were afraid to show up at all, and there were huge holes in the production schedule. As the project gets closer to completion, the need for help is greater than ever. Cheers to Thomas and his team at NorthPoint.