Dispatches From Building on Hope 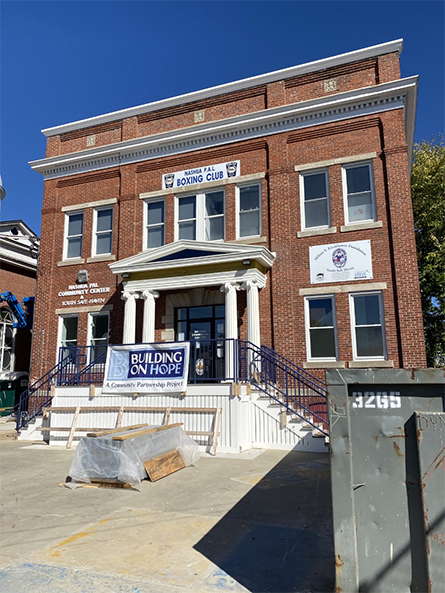 The Building on Hope renovation of the Nashua Police Athletic League is due to be completed in early December. Photo by Scott Harper

Editor’s note: For the past decade, New Hampshire Magazine has been proud to promote the important and possibly unique work of Building on Hope. This group of concerned citizens had their first meetings in our office, and have joined forces with one worthy nonprofit every other year since to arrange for a complete makeover of its building and facilities.

They involve members of the building and design trades along with hundreds of volunteers, who together complete the work in a week or two in the spring. This year, just as Building on Hope was tackling the structure, offices and gym of the Nashua Police Athletic League, the pandemic put a crimp in the process. The makeover continues, but the deadline for completion was extended to December so that work can be done in socially distanced stages (one trade at a time).

As we near the reveal date of December 3 (though as with all construction projects, never mind ones in a pandemic, this could change), we asked Building on Hope volunteer Michael Hauptly-Pierce to send us dispatches from the project. Each week he’ll feature a person who’s donated time, materials and skills to help give new life to the NPAL facilities. First up is Fred Pihl of Hudson’s Key Stone Carvings — read on below.

What began as a dream in the heart of a 13-year-old quarry worker in Milford has turned into a chance to be a force for good. When Fred Pihl, founder of Key Stone Carvings in Hudson, started swinging a stone hammer in the 1970s, he never imagined the Nashua Police Athletic Center (NPAL) would be a part of his journey. But through an organization called Building On Hope (BOH), which helps nonprofits renovate their physical infrastructures, Key Stone Carvings has been able to help the community heal itself. “I have always been a supporter of the unsupported, the underdog,” says Pihl. When he started his stone countertop company almost a decade ago, this was the core value.

Scott Harper, a longtime BOH volunteer, brought Key Stone onboard for the gut/remodel at the Crisis Center of Central New Hampshire two years ago. “Knowing the philosophy behind Key Stone, this was a natural pairing,” says Harper.  Key Stone donated stone countertops for all the rooms requiring one at CCCNH, as well as providing volunteer hours for more boring tasks like painting and cleaning.

“I know what it is like to be down, to feel alone and unloved,” says Pihl. “Thankfully, when I was low, I had people to remind me that I was loved and valued — that I mattered. I am hoping to share that feeling.” Key Stone has also stepped up to provide stone countertops for multiple rooms at NPAL.

NPAL provides after-school and athletic opportunities to over 2,000 kids from the greater Nashua area. Places like NPAL enrich lives, but in case you need more convincing, here are some simple stats from NPAL: 98% of NPAL youths live in poverty. Ninety. Eight. Percent. Pause. At-risk youth with mentors have a 55% better chance at gaining college admission, and 40% achieve better academic test scores. They also benefit from significantly improved mental and physical health. These are services and programs necessary to the health and well-being of our communities, and companies like Key Stone Carvings are critical to their ongoing success.

As a guy who tries to raise money for good causes, I can attest to how hard it has been in 2020. You can’t just throw a party and pass the hat. You can’t send out invitations and expect anyone to attend. Anything! Most of the burden of fundraising and making things happen in the philanthropic world has fallen onto the shoulders of folks like Fred Pihl and his crew at Key Stone Carvings.

Over the next few weeks, I will introduce you to other companies working with Building On Hope, in the hopes that we can help lift up those who lift up the community.