When the lupine bloom in June, the public is invited to the Thomson Family Tree Farm & Wildlife Habitat Area 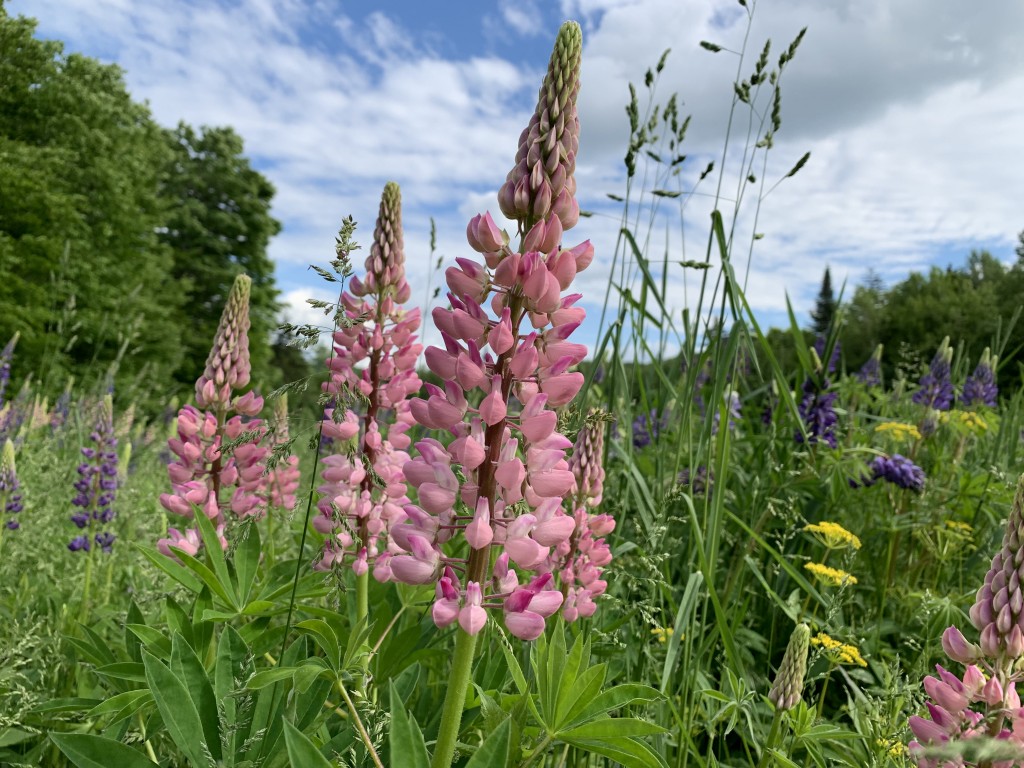 I was eastbound on NH Route 25A somewhere between Orford and Wentworth, when the first hand-lettered sign grabbed my attention, “Lupine Tour …4 Wheel Drive Vehicles Only …” I just happened to be driving a four-wheel drive pickup, so this seemed like an opportunity not to be bypassed. I made the turnoff and started up gravel roads that got narrower and steeper with each turn. The sign at the next intersection read, “High Clearance Vehicles Only!” and I wondered what I was getting into. The next sign suggested that I “Go Slow” and then, “Please Stay On Road.” I was hoping not to end up in a ditch, so staying on the road was agreeable to me. Although the sign did make me contemplate turning around. 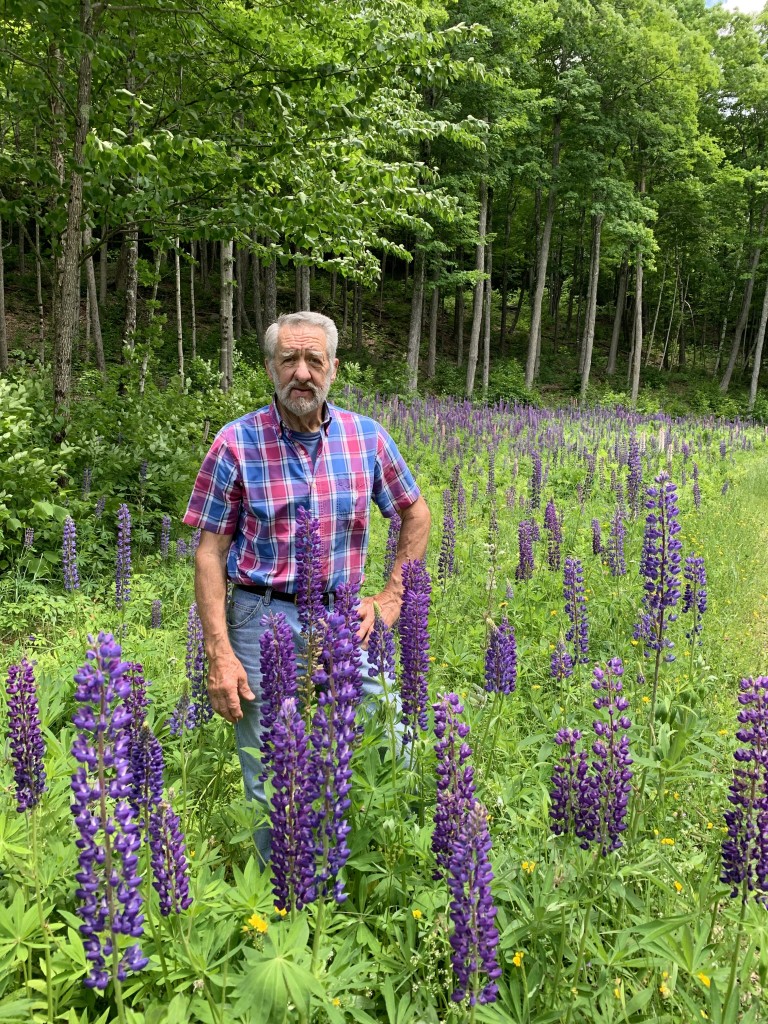 Tom Thomson in the field of lupine. Photo by Marshall Hudson

I ended up in Quinttown, an area mostly forgotten about in the southeastern corner of Orford. Quinttown was named after Benjamin Quint, a sailor who served with John Paul Jones during the Revolutionary War and settled here in 1788. Census records indicate there were at least seven Quint households by 1840, and it was once a thriving village of over 200 people before the Civil War. With the construction of the railroads and free land out west, Quinttown steadily declined, and by 1910, fewer than 40 people called the village home. Today it’s mostly forests, cellar holes and history.

I drove through a gate and another sign told me I had just entered onto the “Thomson Family Tree Farm & Wildlife Habitat Area.” New Hampshire is a small state and I had met Tom Thomson before — he and I have bumped into each other and worked on mutual projects a handful of times over the last few decades. I contacted Tom and we met up for a personally guided tour of this lupine truck road.

Tom and his wife, Sheila Thomson, purchased this 1,060-acre tract in 1989 from International Paper, a multinational forest products company that was then selling off much of its New England landholdings. Most of the accessible portions of this property had been aggressively logged prior to the Thomsons’ purchase and the land needed attention. The initial goal was to establish vegetation on the disturbed slopes to hold the soil. An access road was needed to facilitate cleanup and stabilizing of the site. International Paper had left a skid road and Thomson made it serviceable, hiring contractors and repairing three miles of truck road. The Thomson family installed culverts, cleaned roadside ditches, graveled the skidder roads, installed water bars, and crowned the road surface to shed runoff. To stabilize the raw slopes and disturbed areas Tom seeded winter rye to get something growing quickly, but then got creative.

“I had been reading that lupines have a deep taproot,” he says. “I began experimenting mixing lupine seeds with a conservation mix to seed down the steep banks. The first year I was rather disappointed as we did not have any lupines, or at least I didn’t think we did. The lupine is a perennial, but sometimes they do not actually bloom until the second year. As I took a closer look, I could see that I did have some very small plants, and by the next year they were flowering. It did well, and lupine flower spikes shot up.” Tom added more lupine seeds to the mix the following year.

Lupines have lower maintenance requirements than other vegetation, and they tend to choke out some of the less desirable species like poison ivy. Lupines will adapt to different soil types and can grow in sandy soils or heavy wetter soils; they’re also nitrogen-fixing legumes capable of thriving in poorer soils or summer droughts. Once the lupines are established, they will continually reseed themselves.

The waist-high lupine flowers before me are shades of lavender, pink, blue and white. These contrast delightfully with the yellow, white and orange colors of the daisies, black-eyed Susans, devil’s paintbrush, white clover and other wildflowers. “What I didn’t realize at the time was how much they would add to the beauty and esthetics of our forestland,” says Tom. “Today, with our wildflower mix, the former log landings, truck roads and skid trails are a thing of beauty during the months of June, July and August.”

Another benefit of the lupines is that they provide good cover for ground-nesting birds and nectar for pollinators such as bees, butterflies and hummingbirds. Deer, black bear, moose, hawks, herons, partridge, bobcats and turkeys are frequently seen. Although mountain lions don’t officially exist in New Hampshire, reported sightings have occurred here. On the day I toured the site, I saw a black bear who stood and looked at me while I stood and looked at him, both unconcerned about the other. I lost count of the number of turkey, grouse and deer I saw. 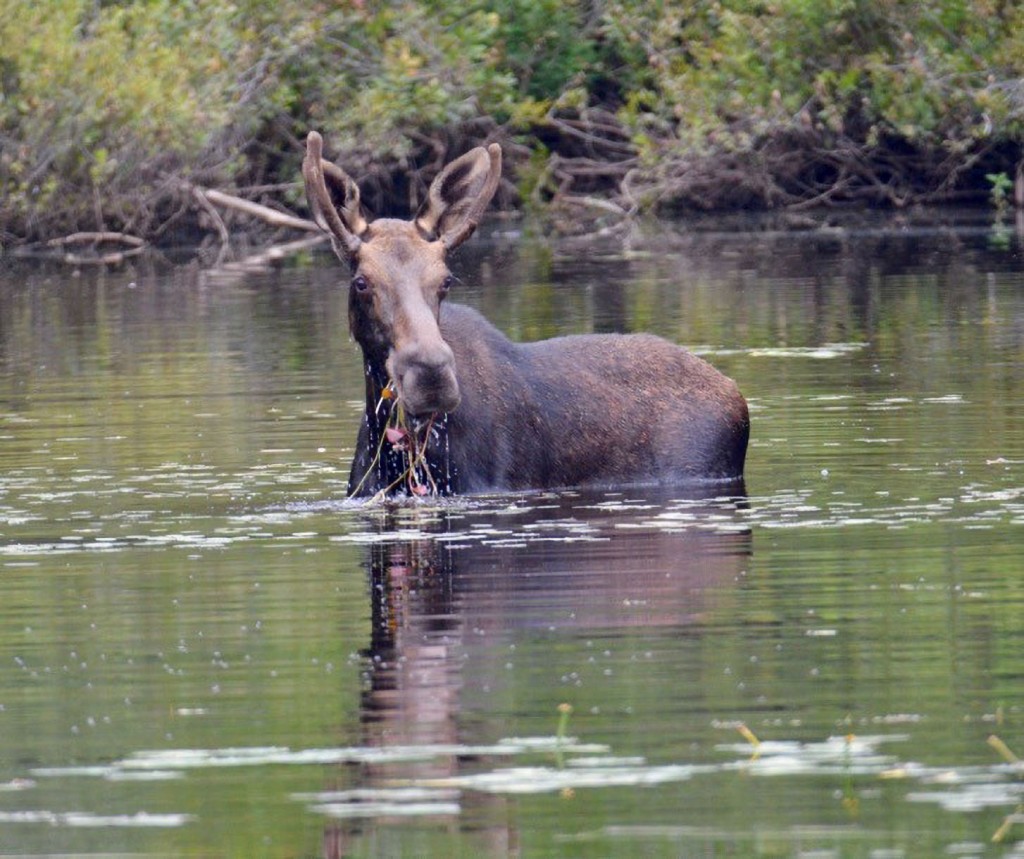 In addition to the extensive woodlands of this managed tree farm, the property contains several other unique features. There is a high elevation pond, six associated wetlands, a natural floating bog, two scenic waterfalls and the remnants of a water-powered, up-and-down sawmill that operated between 1845 and 1862 until forced to close when the labor force dried up as men marched off to the Civil War. Another feature of special interest is the Eastman Ledges with its commanding views. I’ve never had much fear of heights, so I casually ambled to the edge to look out over and caused my host to skip a heartbeat or two. It is a very long way down. If you are feeling energetic, a trail at these ledges connects you to the Appalachian Trail, and from there an ambitious jaunt in one direction will take you Mt. Katahdin in Maine, or the opposite direction will bring you out on Springer Mountain in Georgia.

But the highlight of this tour is the vast areas of lupines in vibrant bloom. If you’d like to see them for yourself, the Thomson family opens the road to the public during the peak bloom season. This varies with the weather, but typically starts the end of June and lasts a few weeks. The tour is on a woods road, and you’ll need a four-wheel drive vehicle with good ground clearance, or utilize the small parking area at the bottom and hike up the road. Bring a picnic lunch and enjoy the vistas overlooking the wildflowers to the mountain views extending into Vermont and New York. Bear in mind this is privately owned property open to the public at the discretion of the landowners, so treat it like it was your own. To find it, just follow the signs.