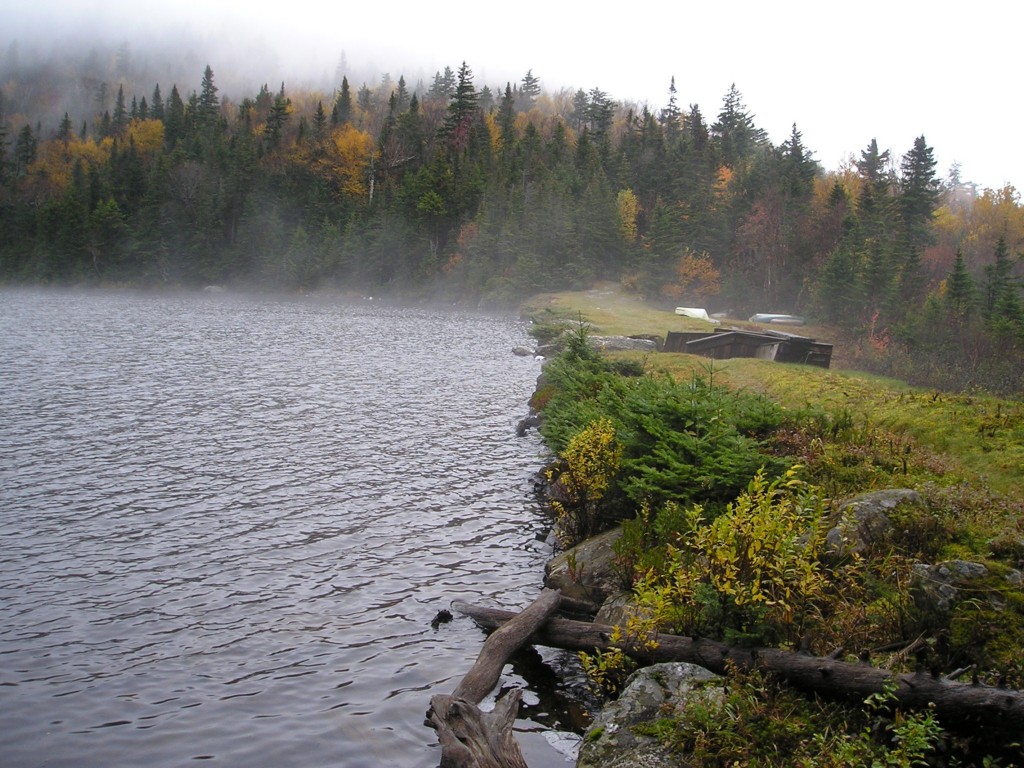 The dam at Boundary Pond in Pittsburg. The other end of the pond is located in Canada. Photo by Marshall Hudson

“The Jolly Green Giant Died Here” reads the plaque affixed to a boulder I had just stumbled upon. I find that to be a little spooky, but also oddly curious as I am out in the middle of nowhere and a long way away from anywhere you’d expect to find an advertising icon.

I’m on Boundary Pond in Pittsburg, also known as Mountain Pond, but Boundary Pond is the better fitting name of the two as one end of the pond is in New Hampshire, and the other end is in Canada — or at least pretty close to it. As the crow flies, Boundary Pond is less than a mile to the Maine boundary too, so it is aptly named. It is a scenic and peaceful place, secluded and at times difficult to access. Known about by the locals and a few loggers, surveyors and hunters, Boundary Pond is mostly visited only by serious fishermen willing to make the trek. Hardy snowmobilers might venture in to it as well.

For many decades, at the outlet of the pond, there was an old drover’s dam, a simple earth embankment dike with a wooden plank sluiceway. This drover’s dam was a relic left over from the days of the log drives, when every spring the waterways in the area were dammed up and then released to float logs downstream to the pulp and sawmills. The old drover’s dam, with its deteriorating wooden sluiceway, was replaced in 2012 with a more substantial dam, which included a new concrete spillway.

It was the east end of the dam where I found the boulder and bronze plaque containing the Jolly Green Giant inscription. Anyone of a certain age reading this plaque will likely sprout images in their mind of canned corn and early June sweet peas, and perhaps hear the deep bass lyrical “Ho, ho, ho! Valley of the Jolly Green Giant” cartoon jingle somewhere in the back of their brain. So, what exactly is an advertisement cartoon character doing in this unlikely and remote corner of New Hampshire? The answer is nothing at all.

In the 1960s there was a New Hampshire Fish and Game conservation officer, or game warden as they tended to be called, who worked in this region of the state. His name was Gary Waterhouse, and he was a big guy. He stood over 6 feet 6 inches tall, and had a powerful body to match. He had big hands that made a formidable impression when he shook hands with you. He was jovial in nature, friendly, always smiling and everyone liked him. In his all-over-green game warden uniform he looked like a big green giant. Coupled with his affable nature, the “Jolly Green Giant” nickname came fast and stuck easily.

In 1968, at the age 36, Waterhouse received a request for assistance from Carl Carlson, another conservation officer working the Pittsburg area. Reports had come in that a large group had come in via Canada and was illegally fishing up at Boundary Pond. Carlson and Waterhouse responded and hiked up into the pond from the Canadian side. It was a longer trek, but they were more likely to bump into the illegal fishermen skedaddling their way out. 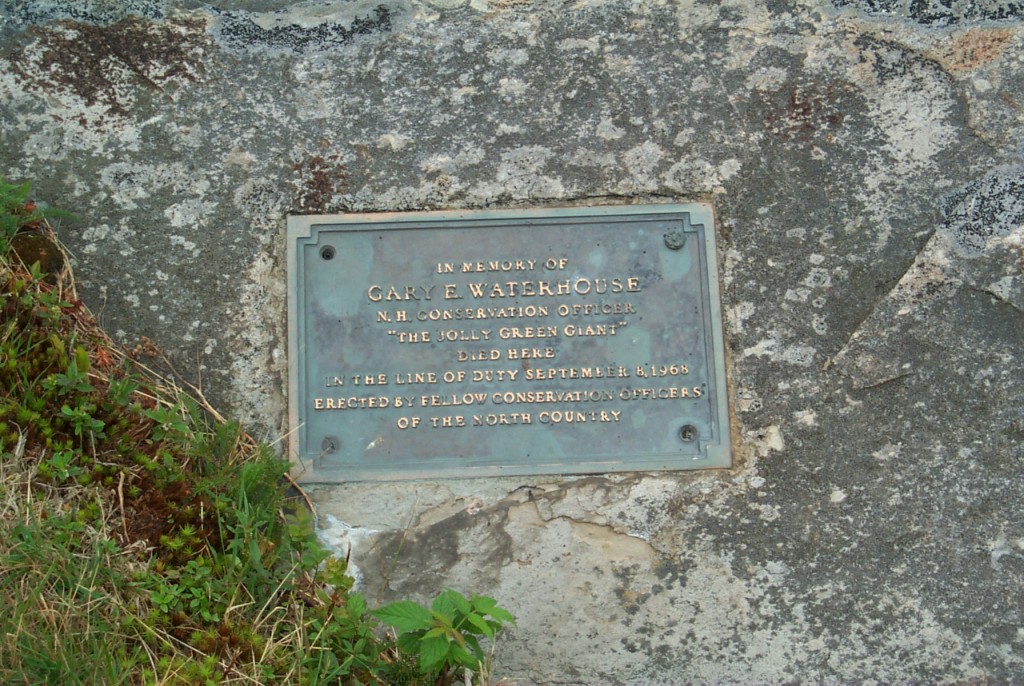 When Carlson and Waterhouse reached the pond, it turned out there weren’t any illegal fishermen there after all. Perhaps they had missed them or perhaps the reported sighting had been erroneous. It was a hot day, and the hiking was uphill and strenuous. Waterhouse was huffing and puffing. When they reached the dam, he complained about having a bad case of heartburn. Shortly thereafter, Waterhouse hit the ground, felled by a massive heart attack.

Carlson administered CPR to the Jolly Green Giant but with only limited success. As this was years before cell phones and radio towers, he was unable to call out for help. The likelihood of someone else coming along who’d be able to provide assistance was slim in this remote area. Carlson was physically unable to carry the Jolly Green Giant out alone. So he left Waterhouse behind and ran the miles to the nearest telephone, located in Chartierville, in the Province of Quebec. A full-scale rescue effort was immediately launched that included local rescue personnel, area doctors and two paramedics from Pease Air Force Base who were scrambled out on a C-130. The Air Force paramedics parachuted out over Boundary Pond to give whatever aid they could.

Sadly, there was nothing anyone could do, and the “Jolly Green Giant,” died on the earth embankment of that remote pond that day. His fellow conservation officers erected the plaque on the boulder that bears his name, the date and the inscription, “The Jolly Green Giant Died Here.” Paul Doherty, the New Hampshire Fish and Game district chief and supervisor of Waterhouse at the time of his death, wrote later in his book, “Smoke from a Thousand Campfires,” “Gary’s death was both tragic and untimely. In this case, however, a man died doing the job he enjoyed, wearing the uniform he was proud of and in a spot he dearly loved. … Farewell, Jolly Green Giant.”

In 2012, when the dam was rebuilt and the old drover’s dam was replaced with a new modern structure, the construction crew tasked with building the new dam carefully removed the boulder containing the plaque and temporarily stored it in a safe place during the construction period. When the new dam was completed, they reset the rock and a rededication ceremony was held in October of 2013. Family members of Waterhouse, the Jolly Green Giant, attended the ceremony and placed a wreath at the plaque.

Anyone who finds their way into this wilderness pond and discovers the boulder as I did, is equally likely to wonder about the story behind the few words inscribed on the plaque, and think about the man who died at this quiet, secluded spot in the line of duty. I have to think that isn’t the worst way for a man to be remembered. Rest in peace, Jolly Green Giant.