It's time to get out and explore the Granite State. Here are our suggestions and readers' picks for the best ways to have fun and maybe learn something new along the way. 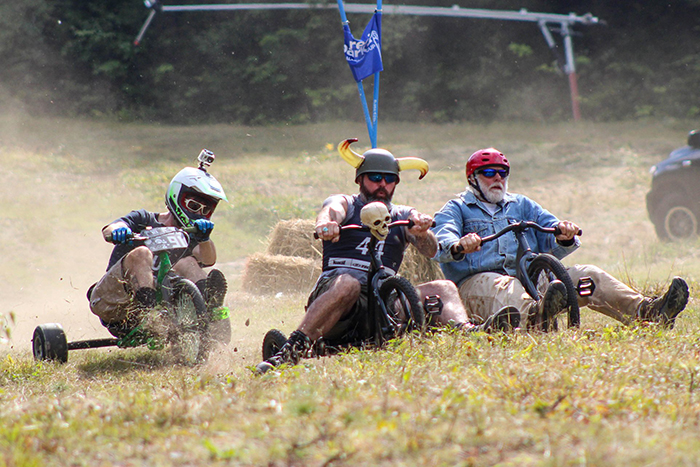 Bar With a View: The new Glen House next to Mt. Washington in Gorham is the fifth iteration located on this historic spot. It’s past stretches back to the 1850s, with four versions succumbing to fire, the final one in 1967. The latest incarnation, which was first proposed 25 years ago and recently opened, continues the Glen House line in grand style. Though the entire building is lovely, you might never leave the gorgeous bar, complete with floor-to-ceiling windows perfectly positioned to offer breathtaking views of Mt. Washington. Don’t just take our word for it — Architectural Digest called it the “most beautifully designed bar” that has the feel of a “new-age cabin.” Consider it the ultimate luxury basecamp for your mountain adventures.

Big Anniversary: If you’ve never ridden the Cog Railway to the top of Mt. Washington, this should be the year you finally make the trip. As of 2019, this mechanical marvel has been chugging up the Northeast’s tallest peak for 150 years. Back when Sylvester Marsh first proposed this “impossible” task, lawmakers at the time said he may as well “build a railway to the moon.” Today, it’s designated a National Historic Engineering Landmark, and it also happens to offer some spectacular — and perhaps peek-only-through-your-fingers — views.

Charitable Renaissance Faire: The New Hampshire Renaissance Faire celebrated 15 years this spring, and for those who’ve been, it’s no surprise that it continues to be successful. With all sorts of different fantastical topics — from knights and steampunk to fairies and pirates — it’s truly a fun, welcoming and family-friendly event that encourages everyone to have a good time. Held in Freemont each May, it’s much more than a chance for people to gather and celebrate. Thanks to volunteers, performers and participants who donate time and money, each year the faire gives away a substantial amount of money. During the faire’s run, they’ve given almost $200,000 to the New Hampshire Food Bank and Meals on Wheels. So next year, don’t miss out on this great event that you can feel good about.

Comedy Club: At 32 years, Headliners Comedy Club in Manchester is New Hampshire’s longest-running comedy club. After three decades, it was time for a change. The new venue, located at the recently updated DoubleTree by Hilton on Elm Street, is classy and intimate and has already hosted some of the area’s best comedians, many of whom have appeared on the “Late Show With Dave Letterman,” Comedy Central, “The Tonight Show” and more. It’s also an affordable night out, usually $20, with the option for dinner and a show at $43. Check out the upcoming shows online.

Community Event: There’s something special — and maybe a little eerie (in a good way) — about the annual Portsmouth Halloween Parade. Whatever the mix of holiday spirit and potentially actual spirits, some magic is clearly working as this grassroots, volunteer-run event is celebrating 25 years this October. Held each year on Halloween night, everyone is invited to don a costume and stroll (or dance, strut or stalk) down Congress Street. It’s more than just people getting dressed up — it’s a cheerful, welcoming celebration of creativity, free expression, inclusiveness and, perhaps most importantly, community. The parade is not a city event — the costs of insurance, police escort and permits are covered entirely by money raised through various fundraisers. Whether you want to join the crowds lining the sidewalk or have the perfect costume in mind, don’t miss out on this unique event.

Convenient Family Resort: Not only is Moose Hillock Camping Resorts a charming family spot in of itself, it also happens to be located in the middle of some of the area’s most popular attractions. Located in North Warren, some of the big-name summer spots are within easy reach, including Flume Gorge, Clark’s Trading Post, Mt. Moosilauke, Loon Mountain, Ruggles Mines, Polar Caves, Lost River, Whale’s Tail Water Park, Cannon Mountain and the aerial tramway, the towns of Woodstock and Plymouth and access to the Appalachian Trail and White Mountains. The resort itself has campgrounds with plenty of amenities, a pool complete with pirate ship, indoor games and a playground. It’s a one-stop-summer-fun spot.

Glassblowing for Beginners: Feeling like you need to flex your artistic muscles? At the mother-and-daughter-run Terrapin Glassblowing Studio in Jaffrey, you can sign up for entry-level glassblowing classes, learning how to make everything from beads and drinking glasses to terrariums and paperweights. Classes take place in both the hot shop (traditional glassblowing studio) and the flame shop (torch studio), and many of the offerings are kid-friendly as well, with age requirements varying from 7 and older to 12 and older. Who knows, maybe one class will lead to a new creative passion.

Hidden Gem Camping: Evans Notch, which wiggles its way through New Hampshire and Maine, is located in the eastern White Mountains. It has several excellent campsites (Cold River, Hastings and Wild River), including the spectacular Basin in Chatham. Here you’ll find hiking and paddling opportunities, plus outstanding views. What you won’t find are crowds — these White Mountain National Forest campgrounds are in a rustic setting, and generally don’t attract as many people as the western White Mountains.

Historic Inn Renovation: Experience a piece of history in Wolfeboro at the elegant Pickering House Inn. Wolfeboro’s motto — “The oldest summer resort in America” — is in part due to the efforts of mid-19th-century businessman Daniel Pickering, who opened the Pavilion Hotel, among many other businesses, helping to attract tourists from Boston and beyond. His former South Main Street home is now on the National Register of Historic Places, thanks to a two-year renovation undertaken by Wolfeboro couple Patty and Peter Cooke. Today, it’s a gorgeous 10-room luxury inn, with all of the modern amenities you’d expect carefully blended with the building’s original features.

Lake Life Promoters: Most museums have a pretty strict “look don’t touch” policy. At the New Hampshire Boat Museum in Wolfeboro, you’re invited to get much more hands-on. For one, you can take a tour of Lake Winnipesaukee aboard a vintage wooden boat The Millie B. Programs include boat-building classes for adults, families and kids, community sailing, summer camp, lecture series, boat restoration plus model yacht-building and sailing. Then there’s the season of events that starts with the ice-out celebration in spring and continues with the Vintage Boat & Car Auction, and a chance to glimpse inside the magnificent boat houses that dot the shores with the annual Boat House Tour. The premier event is the Wolfeboro Vintage Race Boat Regatta, which takes place this year on September 12-14. You can watch the action for free as drivers show off their racing boats from the ’20s to ’80s.

Most Fun on Three Wheels: The annual charge down a grass-and-dirt ski slope on low-riding tricycles is what the World Championship Downhill Tricycle Grand Prix hosted by the Red Parka Pub in Glen is all about. Racers careen down the course, complete with chicane. Great for spectator fun, it’s a hoot of a time held in mid-September at Attitash’s Bear Peak.

New Arcade: Downtown Manchester is undergoing some exciting changes, thanks in part to ventures like Electric Avenue. Opened by Manchester natives, this new family-owned arcade bar invites you to relive your childhood with classic games like “Donkey Kong” and “Qbert.” Or take a turn down their pinball alley, where more old-school favorites await. While partaking in some peak nostalgia, remind yourself that you’re all grown up now, and order from the rotating selection of local craft beer. It’s a fun hangout that’s something different from the typical bar.

Niche Hostel: You could say that rock climbing is having a moment. The sport broke through into the greater cultural consciousness with the Oscar-winning documentary “Free Solo,” and you’ll see rock climbing in the upcoming 2020 Olympic Games in Tokyo. Right here in New Hampshire, there happens to be some excellent climbing, which many consider the best in the Northeast. Getting in on the growing trend of the shared economy (such as ride-sharing) is Dave Cook, the founder of New Hampshire Hostels Network, who recently opened a new hostel in Rumney that caters to rock climbers and outdoors enthusiasts. The Barn Door Hostel and Campground offers indoor accommodations for $20 and outdoors for $10, making it a truly affordable option for those who want to explore the White Mountains area.

Substance-free Nightlife: This isn’t your usual nightclub. At REMIX Coffee Bar & Social Club in Claremont, no one is expected to dress or look a certain way, there’s no cliquey attitude, and the nonalcoholic drinks — coffee, tea and other refreshments — don’t have prices. This gathering place for everyone 16 and older is a nonprofit, welcoming space where “customers” are simply asked to pay what they can. Entertainment and events range from inspirational speakers to music — in fact, Claremont resident and recent “American Idol” contestant Evelyn Cormier (who, by the way, will play at this year’s Best of NH Party) performed here. Fostering community is about more than bringing people together — it also involves giving back. To that end, REMIX donates 100 percent of the proceeds to other local nonprofit organizations.

Truly Local Beer Festival: Beer festivals are nothing new, but this Concord event is doing things a bit differently — here you’ll find Granite State brews only. On July 13, the New Hampshire Brewers Association’s 6th annual NH Brewers Festival will feature the largest collection of New Hampshire craft breweries at any brewfest in the state. It’s a fantastic opportunity to sample what’s brewing locally all in one spot. Make your way among 40 or so New Hampshire brewers offering more than 100 beers.