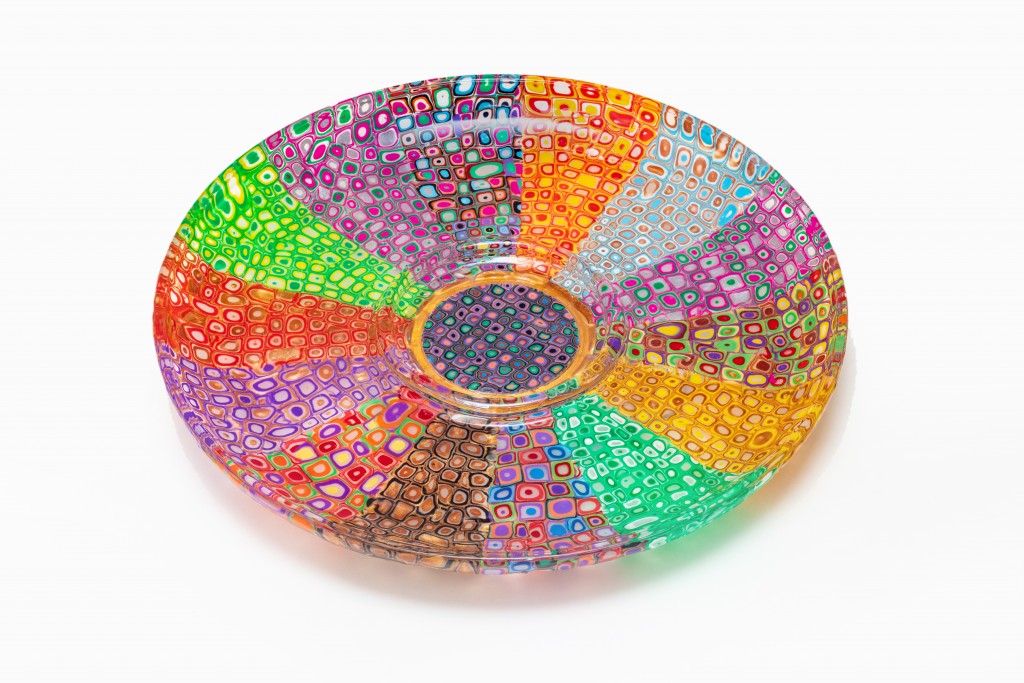 When you are raised in Russia, you have to make sure everything is perfect,” says Galina Szakacs, who emigrated from Moldova, formerly part of the Soviet Union, settling in Nashua 26 years ago. As a trained biochemist, she is now using the same discipline to create technically complicated imagery in polymer clay.

The former Pfizer employee had recently begun a life-coaching career when, after gifting her web designer Barb Young with a small polymer clay vase, Young told her: “Stop. This is what you really should be doing.” The life coach was coached herself, and she turned to clay. Within a few months, Szakacs produced a large body of work, which she sold most of at a recent trunk show. It was a 180-degree career change. Now, the newly minted artist says, “I’m starting to trust the new Galina.”

Her “conversation with clay” methodology sounds simple, but in reality is painstaking. The clay is extruded into strands, and the strands are combined in a myriad of ways into multicolored canes. The canes are then sliced with a “guillotine” wire into thin cross sections. The design revealed can look like anything from abstract art to a blossom to a kalidoscope pattern. But here’s where the real fun begins for Galina: She combines the sections by bookending patterns, or rotating them or adding one cane cross section to another. The story continues — the resulting statement is as visually intriguing as a complicated patchwork quilt.

With a variety of flattened patterns in clay at the ready, Szakacs lets herself get a little wild, not sure exactly where every piece is headed. One of her favorite combinations of square shapes has been dubbed Klimt-inspired, in reference to the complicated backgrounds in many of Gustav Klimt’s paintings. The final design is rolled onto the back of a ready-made glass objects, such as bowls, plates or vases, and then fired lightly in an oven. When the light shimmers through the array of patterns on patterns, the conversation begins again, this time with the observer.