Believe it or not, a local Walmart find makes it into Ripley's 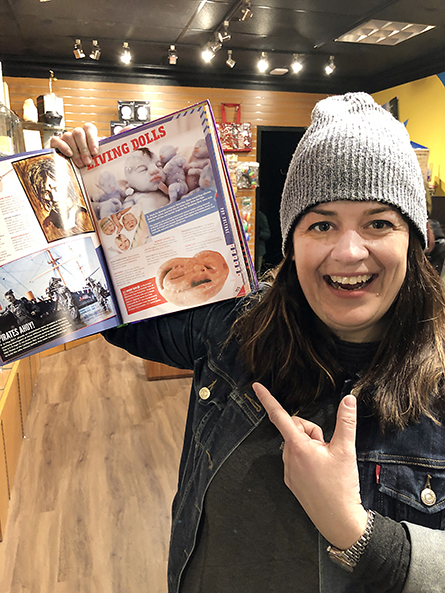 She was just “randomly shopping at a Walmart in Gilford,” confesses Manchester social media maven Danielle York when, on a hunger impulse, she picked up a honeybun from an endcap. She didn’t look at her treat again until she got home and popped it in the microwave to heat it up. Then she saw it, the face of Spielberg’s most famous extraterrestrial, ET.

Knowing that it was a remarkable likeness, she took a photo of the bun. Then she ate it. Then things got weird. She posted the photo online, and friend and restaurateur Tom Puskarich cross-posted it to Reddit. Before long, he called to let her know that views of her ET-faced honeybun had leaped to hundreds of thousands. Redditors were busy Photoshopping York’s ET into graphic scenarios, some rated X, and its spot as a viral meme was secure.

One such touch of iFame is rare enough, but York was contacted a short while later, in 2016, by the publishers of “Ripley’s Believe It of Not,” requesting the use of her photo in their centennial book, “100 Years of Strange.” They offered her a copy of the book and $75 for the use — so much for getting rich on a meme.

The book was published late last year, and York received her free copy without the promised $75 check, but, she says, “It’s cool enough just to see my photo in the book with my name and New Hampshire mentioned.”

So is this the end of the trail for the ET honeybun? York says that’s probably the case, but notes that Ripley’s is rebooting its “Believe It or Not” TV show on the Travel Channel with actor Bruce Campbell (of “Evil Dead” fame) hosting.