All Aboard The Tiny House Train

Roundhouse Workshop builds reproduction railroad cars in the 3-foot, narrow-gauge scale. They are constructed to meet U.S. Department of Transportation standards for transporting over any of the nation’s roadways. Photo by Ian Raymond

You’re heading down I-93 when a caboose whooshes by in the passing lane.

You’re not hallucinating. It is a caboose, just not one that will ever travel on a standard railroad track. In fact, it’s a brand-new caboose made by Roundhouse Workshop of Contoocook, where proprietor Chisholm Hofe — Chi for short — builds new boxcars and cabooses from scratch. They are painstakingly modeled after their 1880 narrow-gauge counterparts.

Hofe is totally used to the honking, thumbs-ups, and just plain puzzled looks whenever he hauls one of his custom-made, brand-new, roadworthy cabooses or boxcars down the road.

“I’ve loved trains since I was born,” says Hofe, who grew up in Morristown, New Jersey, and spent his childhood tinkering with HO-scale model trains. In fact, when he was a teenager interviewing at several private schools, a deciding factor was a collection of decommissioned cabooses he saw on a trip to Tilton.

“We were heading to the Tilton School, and when we passed the cabooses, I immediately decided that this is where I was going,” he says with a laugh. Indeed, whenever he had a spare moment between classes, he was at the depot, making friends with the workers and volunteers and helping out wherever he was needed. After high school, he headed to college in Ohio but came back to New Hampshire to spend his summers in Lincoln, living on board an 85-foot Pullman car he had purchased and was restoring.

His first job after college was with the Claremont and Concord Railroad, where he steeped himself in railroad culture by wearing several hats, including conductor, engineer, and helping to restore the historic Flying Yankee. He also worked as a night watchman and actually lived in a sleeper car on the property. The experience only fueled his railroad jones, and he ended up buying two more railroad cars.

By 2006, he was in Concord, and married with a young family, so trains took a bit of a back seat. He wanted to be his own boss instead of working for someone else, so he converted his experience restoring railroad cars and launched the Roundhouse Workshop, a construction company specializing in residential timber-frame homes. He had help from Ed Evans, a subcontractor friend who handled the architectural and graphic design work, and it didn’t take long before they were booked several years out. 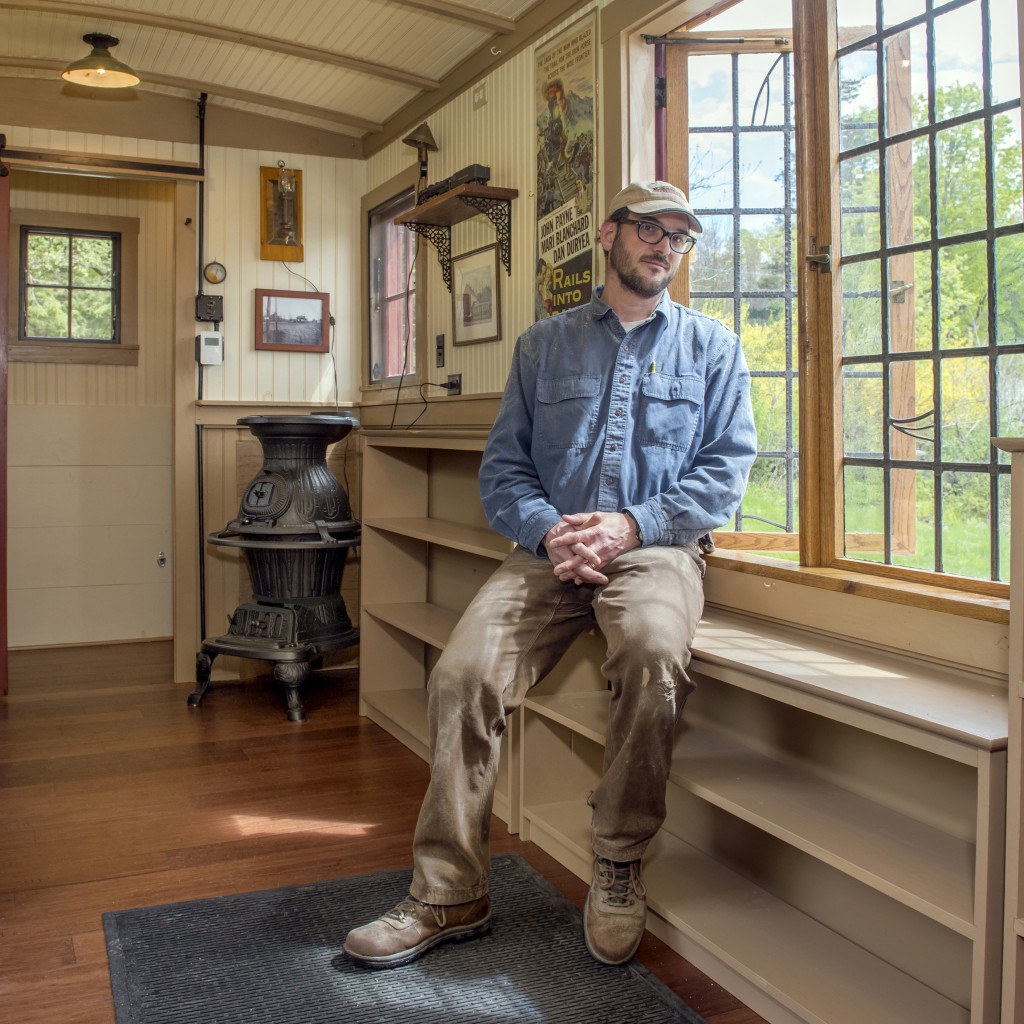 But they soon got bored. Turns out that Hofe and Evans loved working on old homes, not airy new timber-frame designs. Besides, he missed his trains, so he returned to Tilton to work on the cabooses from time to time. He also restored a 1968 Serro Scotty Highlander vintage travel trailer so he and his family could go camping.

In 2014, Hofe was pondering a few ideas for his next side project and told Evans he thought it would be cool if he could tow a small boxcar behind his truck instead of a standard trailer to haul his tools and building materials. A few weeks later, Evans handed him a set of plans for a roadworthy boxcar circa 1880 with Roundhouse Workshop stenciled on the side. Hofe loved the idea, but being a railroad purist, he scoffed at the idea of having a railroad car on rubber wheels. “But I looked at it and my jaw dropped, and I knew we had to build this thing,” he says.

The tiny house craze was just starting to build up steam, so they decided that their first project would have room for a bathroom, kitchen and bedroom. They scrounged a few hours here and there on the weekends and set a goal to debut their first boxcar at the 2018 Fryeburg Fair. But there were never enough hours — or dollars — for the project, and as the deadline got closer, Evans suggested turning it into a pub instead.

So they did. At the fair, they didn’t know quite what to expect, but a steady stream of visitors stood before the boxcar and stared. Then they stared some more.

After all, a boxcar with no track in sight would naturally attract attention. But it was more than that. “Some people stared at it for hours,” says Hofe. “They weren’t sure what they were seeing or what we were selling. One woman just stared at the window box filled with flowers.” At one point, Evans asked what fascinated her so.

“You nailed it,” she said, “you absolutely nailed it.” The window boxes just confirmed for her — and the others who couldn’t peel their eyes away — that aside from being a vintage railroad car away from its natural habitat, what it really boiled down to was the obsessive attention to detail that Hofe and Evans bring to their creations: from the reproduction push-button light switches to the timber-built frame to the cypress they use for both interior and exterior siding, it’s the little things that matter — and stand out most.

After Fryeburg, they turned their attention to building not one but two cabooses. Hofe’s wife Sarah named the green one with an open-floor plan “Caty Greene,” after the wife of Revolutionary War major general Nathanael Greene, while the name Lucy just popped into his head for the second, a green caboose with kitchen, bath and two sleeping areas, essentially a tiny house complete with cupola.

They were on their way. But just as they finished up “Lucy,” Covid hit. The fair and show circuit ground to a halt, and potential buyers were scarce.

Hofe faced a dilemma: He wanted to sell one of the three to generate funds to build more boxcars and cabooses, but the company still needed a display model for each to show to future customers. When “Caty Greene” sold in late 2021, he decided to take “Lucy” off the market — he converted the boxcar to his home office during the pandemic — and decided to rent out “Lucy” and the boxcar pub for special occasions within New Hampshire, like weddings and anniversary parties, and even to people who want a place to put overflow guests. 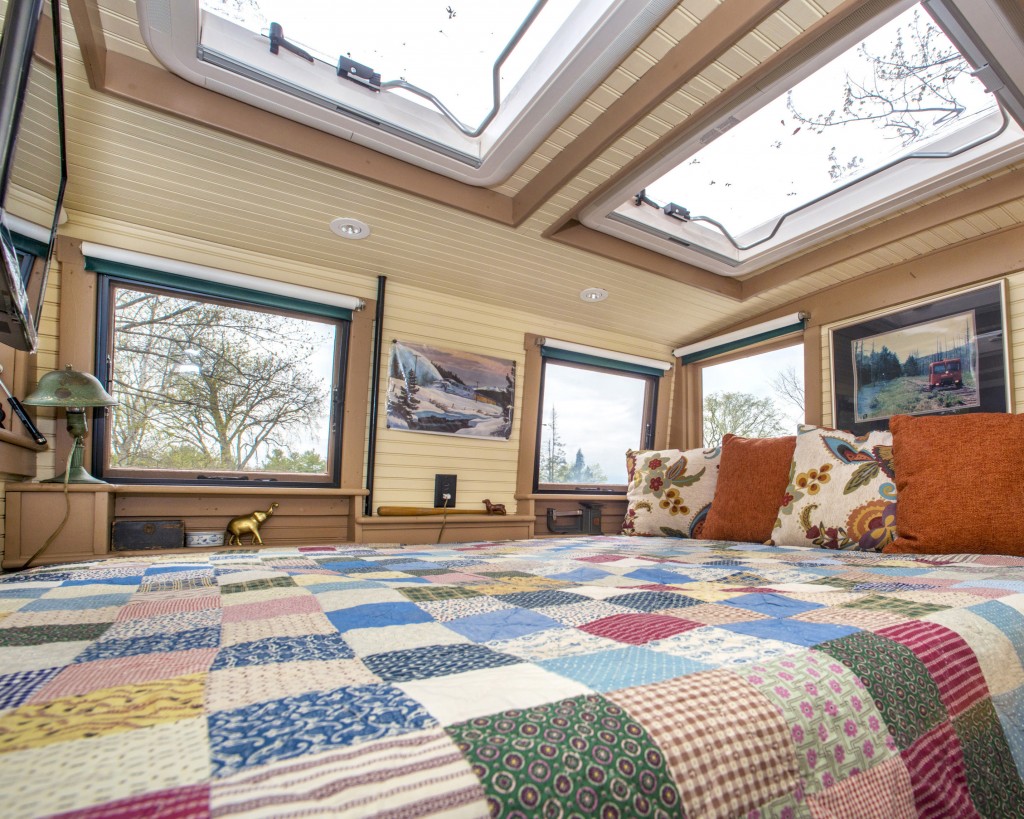 The finished cupola serves as the master bedroom, which fits a queen-size bed, and has LED lighting, a flat-screen TV and skylights to enjoy sunsets and stargazing. Photo by Ian Raymond

While he initially envisioned them as being suitable for tiny homes, man caves and campers that attract a lot of attention at the campground, he mentions that craftspeople and jewelry artisans have inquired about commissioning him to build a caboose to serve as their mobile storefront. Makes sense, because as he puts it, “You could sell a turd in here.”

His future plans include building one or two boxcars and cabooses (cabeese?) each year. “I don’t plan to pump these out like cookies,” he says. “It would lose a lot of the magic. I take my time when building these and I don’t want to be rushed.” He’s also looking for land somewhere in New Hampshire where he can situate a small seasonal Airbnb complex with several boxcars and cabooses.

Today, when Hofe and Evans bring a Roundhouse boxcar or caboose to a local festival or exhibition, people still stare, distracted by the craftsmanship and caboose in front of them. Hofe faithfully launches into his spiel on how he builds brand-new replicas of 3-foot narrow-gauge railroad cars from the 1880s, providing helpful details about the construction materials and where he got the authentic railroad lantern that hangs on the wall, and when he finishes talking, someone will inevitably emerge from their trance and ask, “Where do you get the old railroad cars from?”

Once again, he explains that they are brand new but designed to look old. “We get this question all the time,” he says, and he’s never surprised.

Instead of being frustrated by the question, Hofe says he’s honored by it.

“I love doing this because it combines all my passions: trailers and trains and electricity and plumbing and building. Plus, I’m able to control it. I can tow it anywhere I want within reason, and not have to depend on a railroad to tell me where I can and can’t go with it. And I like that I can offer this to other people.