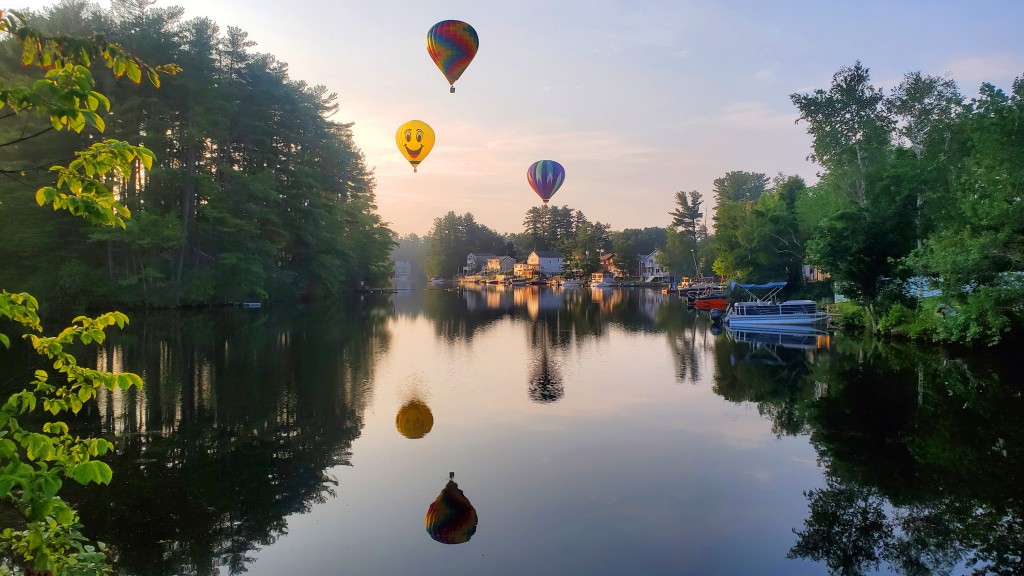 Hot-air balloons reflect in the morning light on the Arlington Mill Reservoir in Salem. Photo by Marshall Hudson

Zero-dark-thirty and I’m up and headed south on Interstate 93. Despite the early hour, traffic is busy and reckless drivers are flying past me and tailgating shamelessly even though I’m doing the speed limit. I’ve survived a couple of harrowing close calls by the time I pull into Salem for today’s adventure. It’s 5 a.m. and dark in the parking lot when I meet pilot Andre Boucher and the ground crew from A&A Balloon Rides. Our plan is to be airborne at dawn for a sunrise balloon flight.

After a head count and safety briefing, passengers and crew pile into a van towing a trailer stuffed with balloon and head to the launch field. At the site, the crew starts unpacking while passengers stand around wondering if it’s too late to back out. Eager to be doing something, I jump in when the ground crew asks for some volunteer muscle to assist with setup. We unfold the balloon and position a fan to blow air into it. We unload a wicker gondola basket, mount a burner on top of it, and hook up a propane fuel tank. Andre test-fires the burners and shoots a fire-breathing-dragon-flame up into the air. The balloon is attached to the gondola and nervous passengers, still trying to look unconcerned, climb into the gondola.

Andre opens the valve and flames shoot up, sending hot air into the balloon. The ground crew waves goodbye, releases the tether lines, and get smaller and smaller as we break the bond with gravity. With the first crimson light of dawn creeping over the horizon, we pop out above the treetops. The mood in the gondola is holding-your-breath-quiet but exuberant. The views are exhilarating as we look down upon woods, ponds, streets, rooftops, backyard swimming pools and mountains off in the distance. Drifting over Arlington Mill Reservoir, the balloon in front of us does a “splash and dash,” gently touching down on the surface of the water before powering up and floating over the treetops.

The pilot can control the altitude of the balloon by adding or eliminating heat from the burner. The warmer the air in the balloon the higher we rise, and cooling off brings us back down again. We yo-yo along at heights varying between 500 and 2,000 feet above the ground. A joke is told about a passenger who was asked, “How was your balloon ride?” and he answers, “It had its ups and downs.” The pilot can’t control the speed at which we travel, that is determined by how fast the wind is blowing. If wind speeds are anticipated to be above 5 mph or if there is a chance of rain, fog or snow, the balloon doesn’t launch.

The wind also chooses the direction in which we travel. The pilot has the ability to rotate the balloon such that it always faces the direction we are going but has little ability to steer our course. Sometimes wind at a higher elevation will be blowing in a different direction than wind at a lower elevation and that gives the pilot some ability to steer by raising or lowering the balloon into the wind direction of his choosing. Ultimately, the wind and whim of Mother Nature determine where we are going and how fast we will get there. The mystery of where our landing will be is part of the allure of ballooning and the only guarantee is that we will come down somewhere. 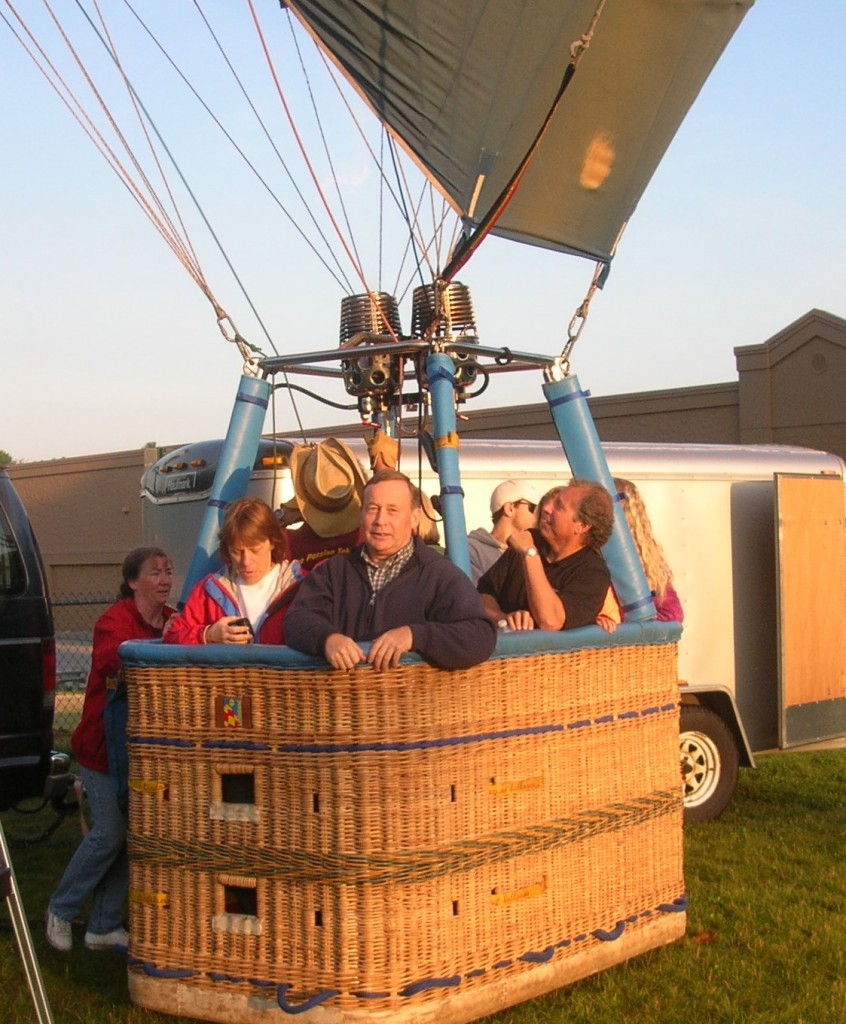 Our ground crew in a chase vehicle is tasked with following us without knowing exactly where we are or where we are going. They are also limited to road travel and must circle around lakes and wooded hills that we just float over. Tracking is done through electronic GPS devices and the ground crew arrives just as we land on a surprised lady’s front lawn. A balloonist tradition requires that the lady be presented with a bottle of champagne by our pilot. Meanwhile, the ground crew removes the balloon from her lawn.

Hot-air balloons were invented in France in 1782 by the Montgolfier brothers. The brothers worked in a paper manufacturing plant and were inspired one day while watching the sparks, smoke and burning paper rise in the warm air created by their fire. They made a small bag out of silk and lit a fire beneath the opening, causing it to rise. A year later, the first occupied hot-air balloon took place on September 19, 1783, but not knowing if there was oxygen enough for humans to breath at the heights the balloon would soar to, the passengers that day were a sheep, a duck and a rooster. All of them survived when the balloon came down 15 minutes later. The first human flight came about two months later when the Montgolfier brothers launched a balloon from the center of Paris and flew for 20 minutes above the city.

Eighteenth-century French farmers who knew nothing of the newly invented hot-air balloons were understandably spooked when they first saw a colossal, flaming, smoking object filled with people or barnyard animals floating across the sky and crash landing in their fields. The farmers assumed the balloons might be mythical creatures, aliens or invading armies, and on occasion attacked the balloon with pitchforks, scythes or axes. Passengers carrying champagne to drink during the flight offered the attacking farmers a bottle as a gesture of goodwill, demonstrating that they weren’t fire-breathing dragons, just friendly aristocrats arriving from the Champagne region. The farmers happily accepted the champagne as payment for landing in their field and a tradition was born.

Today, it is also a tradition to offer champagne to the passengers after a hot-air balloon ride, and to raise a glass proposing a toast citing the Balloonist’s Prayer: “The winds have welcomed you with softness. The sun has blessed you with its warm hands. You have flown so high and so well that God has joined you in laughter and set you gently back into the loving arms of Mother Earth.”

With my flight concluded, the balloon stowed, the prayer said, and the champagne sampled, I ponder the questions asked about balloon rides. Did you have the fear-of-heights sensation? No more than looking out the window during an airline flight. What about motion sickness? There was no turbulence and no rocking motion. We drifted along smoothly and I felt no motion sickness. Is it dangerous and was it scary? I’m thinking it was less dangerous and scary than my ride down the Interstate to get here this morning was.

Categories: Family-friendly things to do, People