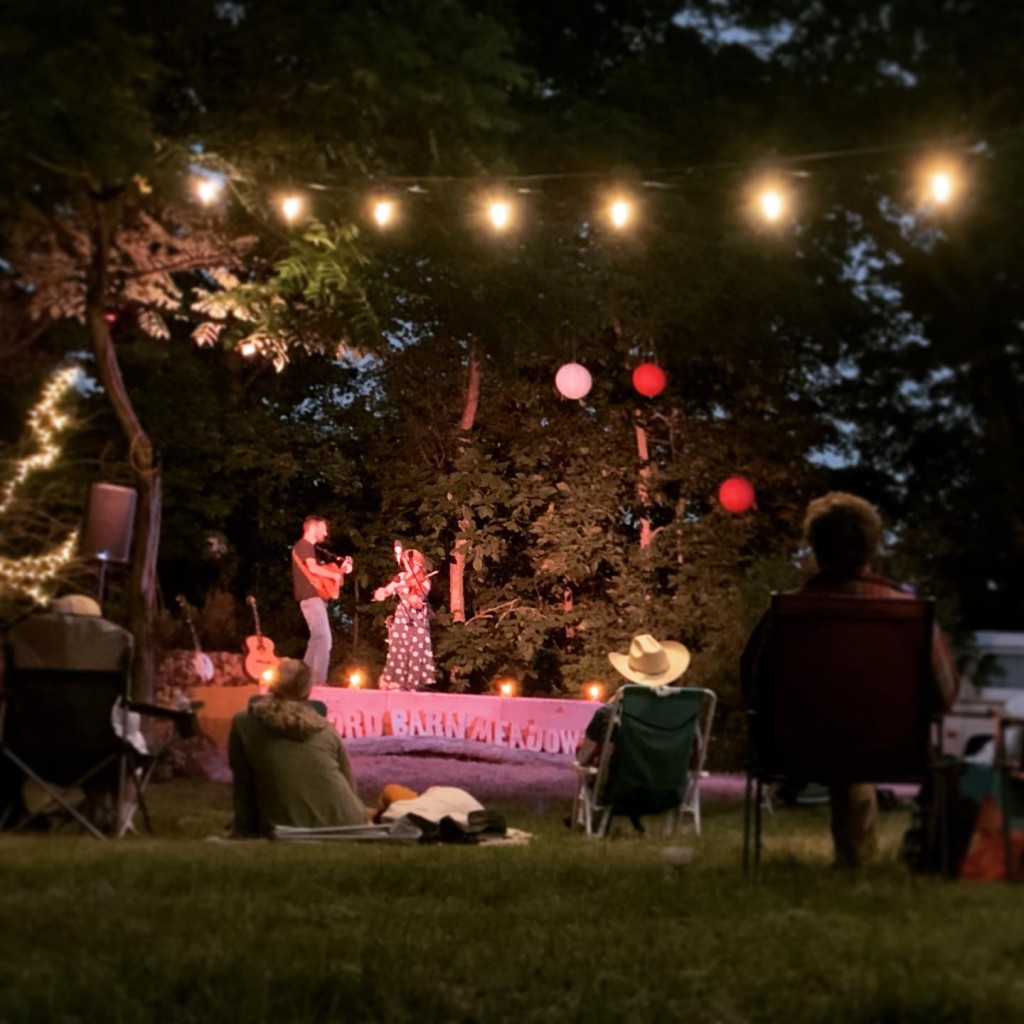 It’s been more than four months since most musicians had their unexpected last load-out and stages across the state went quiet.

But now, thanks to a phased opening, New Hampshire musicians are getting back out again. Fans of live music are being serenaded by artists who have, until recently, been relegated to streaming performances online — a poor substitute for being in front of a crowd of living, breathing people.

“There’s something about playing live music in front of people,” says Paul Warnick, a middle school music teacher from Gilford who has been playing in front of crowds for more than 30 years. “You see the body language and feel the feedback.”

Restaurants, clubs and venues have retooled so that the show can go on. Gazebos and decks have been converted into impromptu stages, giving musicians a shot at performing again, and patrons a taste of pre-pandemic normalcy.

Here are five live music destinations, from the Lakes Region to the Seacoast, highlighted by musicians who have been given a chance to pursue their muse once again. 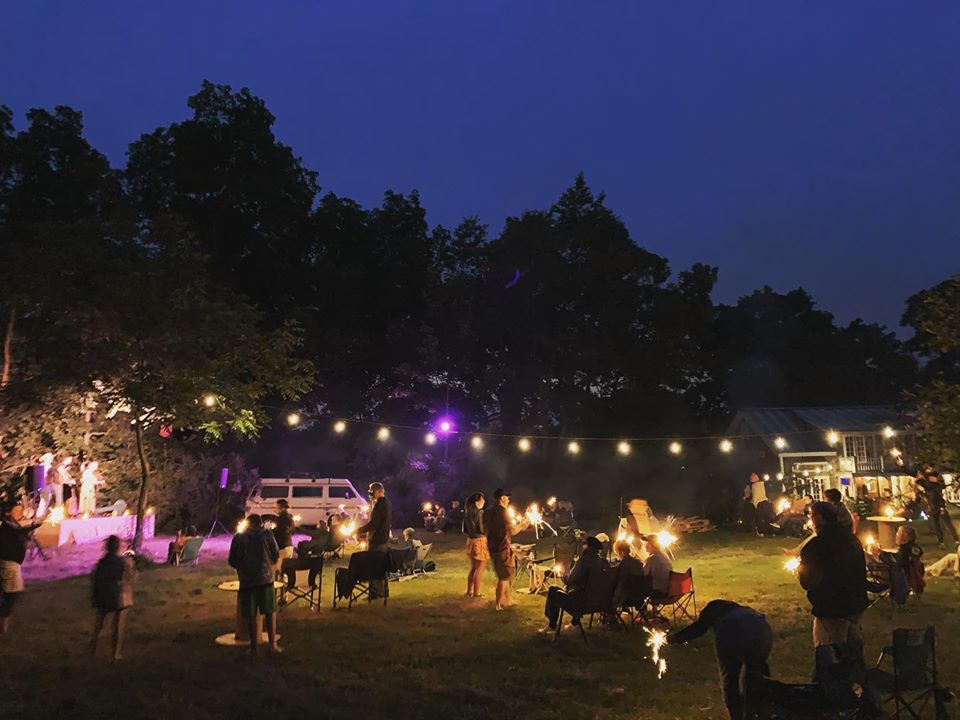 “This is Ben and Sarah Anderson’s place,” Scott Heron of folk/bluegrass/Americana duo Green Heron says. “They made a little concert venue in their barn and had been doing shows regularly when everyone had to shut down. We were the first gig back.”

The Word Barn allows fans to gather in a small, beautiful outdoor setting, called The Word Barn Meadow. A purpose-built stage looks over a lawn illuminated by strings of warm, glowing lights.

A sample of Green Heron

“We have intentionally curtailed the capacity at 75 just to ensure everyone has the room they need to feel comfortable, even though the space can hold considerably more,” Ben Anderson says.

One of the best parts of The Word Barn, Heron says, is that it has a loyal, enthusiastic group of music lovers who know where to find a great venue.

“Folks just always go,” he says. “Every week. And our shows were no different — the first sold out in a week or so. It was the best experience and I highly recommend it.”

Here’s a list of upcoming shows you can see at the Word Barn Meadow. 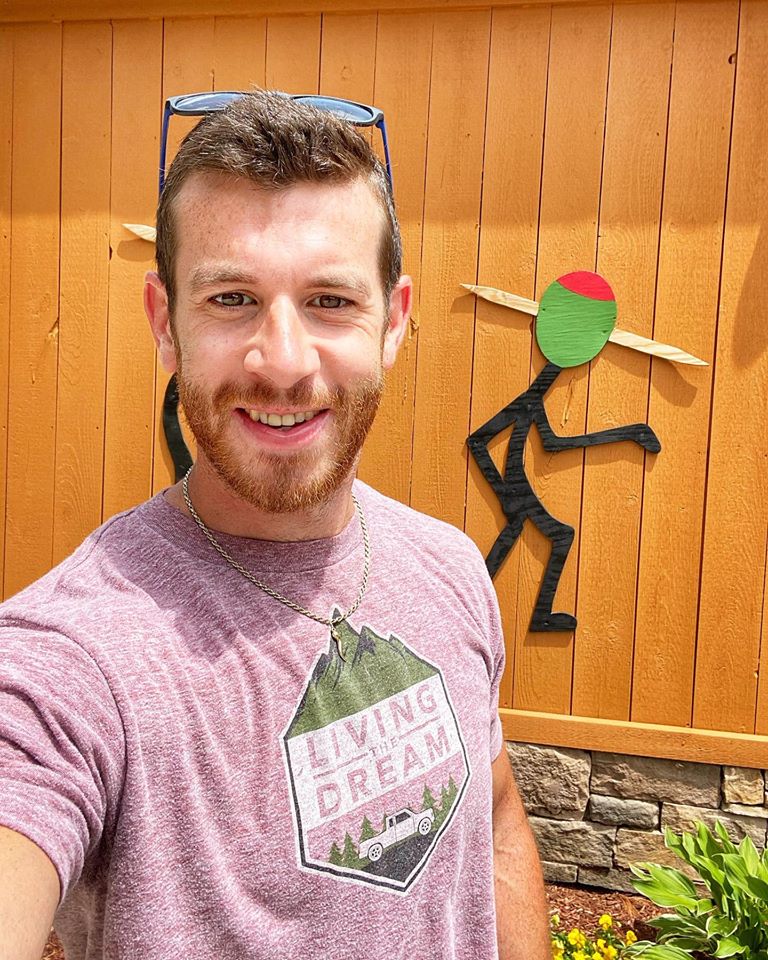 Brad Bosse gets ready to go onstage at the Stumble Inn.

Brad Bosse is a full-time musician, so when live music came to an abrupt halt in March, things initially looked a little grim. The Hooksett resident averages 350 gigs a year, and found the sudden shutdown scary.

“There were a lot of unknowns,” he says.

Bosse made the move to the life of a musician from a sales background, which gave this busy troubadour a strong work ethic and typically, a packed schedule.

“I liked to be fully-booked 6-8 months in advance,” he says. “All of a sudden it disappeared.”

When the lights came back on, however, Bosse fell back on skills learned during his previous career and hit the phones.

The first show back was on a sidewalk at the corner of Elm and Lowell Streets in Manchester at Penuche’s Music Hall.

“Chuck Kalantzis called and said, ‘hey, we’re going to open up. I know you musicians are struggling.’”

A sample of Brad Bosse

To start he played for tips, and discovered that people appreciated the struggle artists were facing.

“The tips were great,” he says. “People understood. And they were also like, ‘Oh my God, life feels semi-normal right now.’”

More recently, Bosse has returned to an old favorite — The Stumble Inn Bar & Grill in Derry.

“I love that place,” he says. “I’ve been playing there for eight years now. The owner, Mike, is one of the greatest guys around. He treats his staff like gold, and they’ll do whatever they can for him.”

A large tent sits just outside this Rockingham Road spot, and that’s where Bosse sets up during his many return dates. What can listeners expect? The unexpected.

“I do everything from Frank Sinatra to the Notorious B.I.G., and sometimes after one another,” he says. “But it’s a Jack Johnson, Sublime, Grateful Dead style — Kenny Chesney to Kenny Loggins.”

Here’s a list of upcoming shows you can see at The Stumble Inn Bar & Grill. 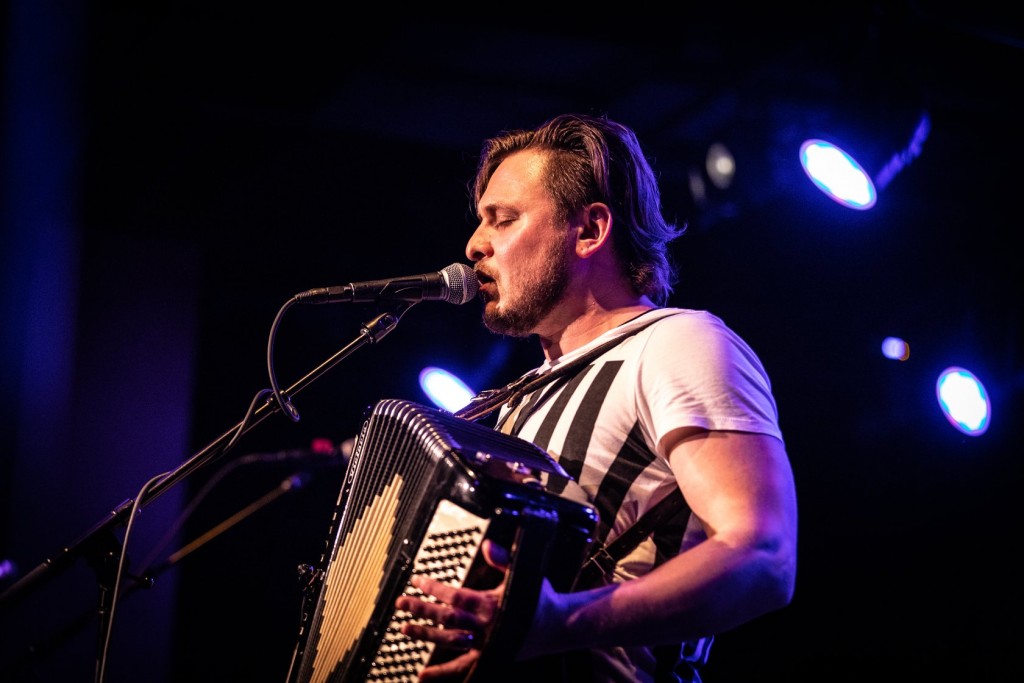 When it was time for the members of The Rebel Collective to get back onstage, it was, if you’ll excuse the U2 reference, a sort of homecoming.

“It was great to get back onstage in our hometown, the Laconia/Gilford area,” says Brian Waldron, who sings and slings a wild accordion with the group.

A sample of Rebel Collective

The Rebel Collective — Michael Green, Brian Waldron, Ross Ketchum, Connor Veazey and Pete — set up, six feet apart on the gazebo at the Belknap Mill, and played its first gig since the pandemic killed their peak season just before St. Patrick’s Day.

“Connecting with fans is really important to us,” Waldron says. “People were really happy to see people again. Most importantly there was the feeling of live music present. And it was a hot, hot day, so for people to come out on a 90-degree evening, it showed that people are craving it.”

Audience members sat in marked areas on the grass, ensuring social distance, as Rebel Collective played through a set of Irish/American/pub rock.

“You could tell everyone wanted that connection to people and music,” Waldron says. “There’s something about a live music experience.”

Here’s a list of upcoming shows you can see at the Belknap Mill. 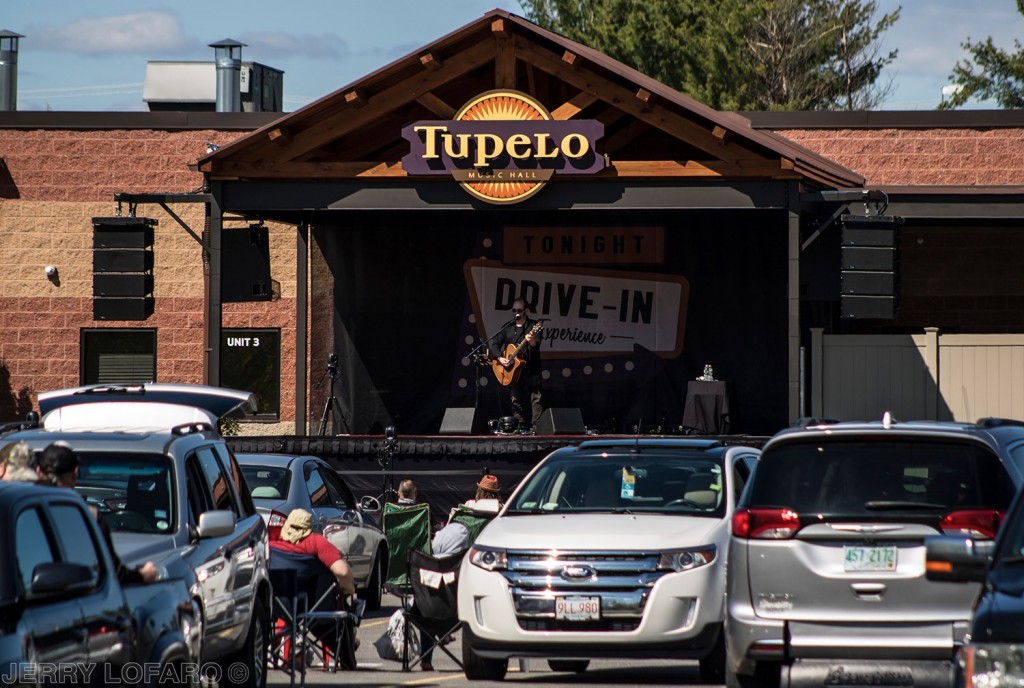 Scott Hayward, the owner of the Tupelo Music Hall in Derry, has retooled the venue, creating The Tupelo Drive-In Experience — an outdoor stage setting that has now put together a busy and impressive summer schedule.

The parking lot opens 45 minutes before each show. Get your tickets, produce your email confirmation upon arrival, and you’ll get a flyer with information and a menu. Parking attendants will guide you to a “Home Space” (larger vehicles in the back, smaller cars in front and leave the RV at home). Every vehicle has an adjacent space on the driver’s side for lawn chairs.

Here’s the great part: If you can’t make it, shows are streamed online on the Tupelo Music Hall website (there is a tip jar). And if you’re at the show, you can tune your radio to 95.1FM and listen along.

Tupelo Drive-In Experience has an outdoor dining tent with reserved seating during all shows. Expect a full bar and waitstaff at tables designed for one, two, four and six people. The dining area opens 75 minutes prior to each show, and patrons in the tent will not need to purchase a drive-in ticket. The dining tent offers a side-view of the stage. Seats start at $20 each, and you’ll need to reserve an entire table. Reservations for the dining tent must be made in advance.

Here’s a list of upcoming shows you can see at the Tupelo Music Hall Drive-In Experience. 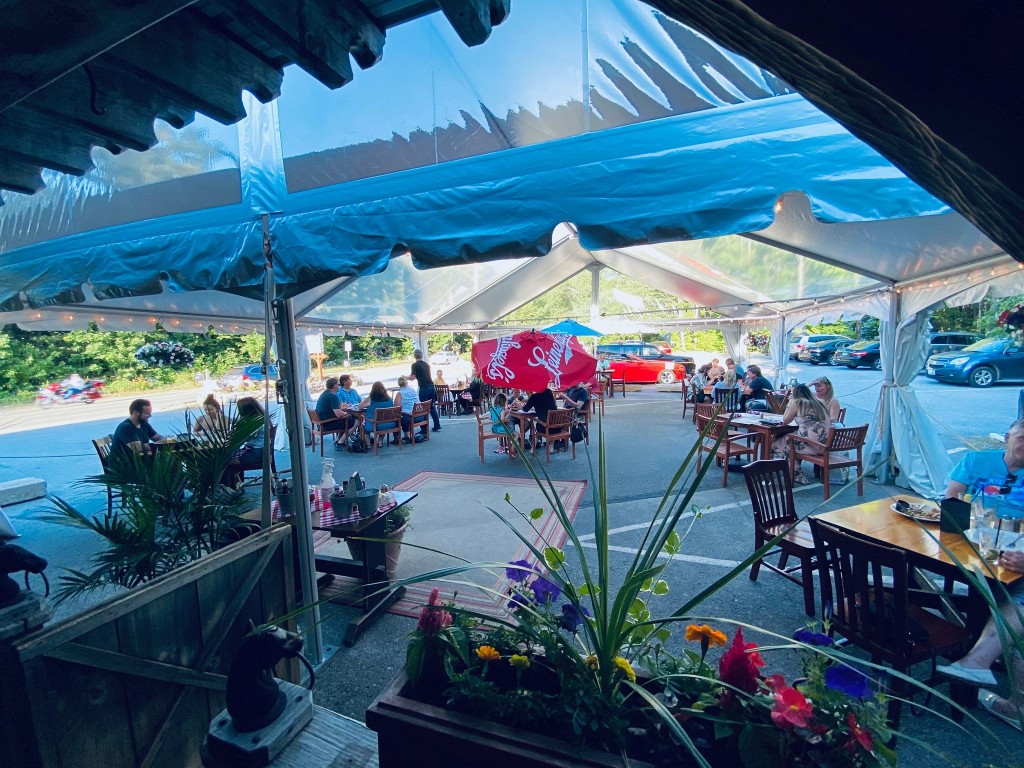 “This is a weekly thing for me in Gilford,” Paul Warnick says of his gig at the Ellacoya Barn & Grille. “I play there every Thursday and Sunday — it’s in an outdoor tent, and they have done an outstanding job making everyone feel safe. I feel super comfortable playing there.”

A sample of Paul Warnick

Warnick says he visited the venue prior to the first show back and found the owners had created a space where he could be heard, yet remain safely distanced — which was important to Warnick and his family. His last show before the pandemic put a pause on live music was at the Woodstock Inn Brewery in North Woodstock. He’s been back at it for a few weeks, playing 5-6 venues total, 4-5 nights a week, and he has returned to North Woodstock to pick up where he left off.

“People have been incredibly thrilled to have live music,” Warnick says of getting back on stage. “If anything, the fact that a lot of folks had taken it for granted have made them really appreciative to have it in these outdoor settings.”