A town that remembers times gone by 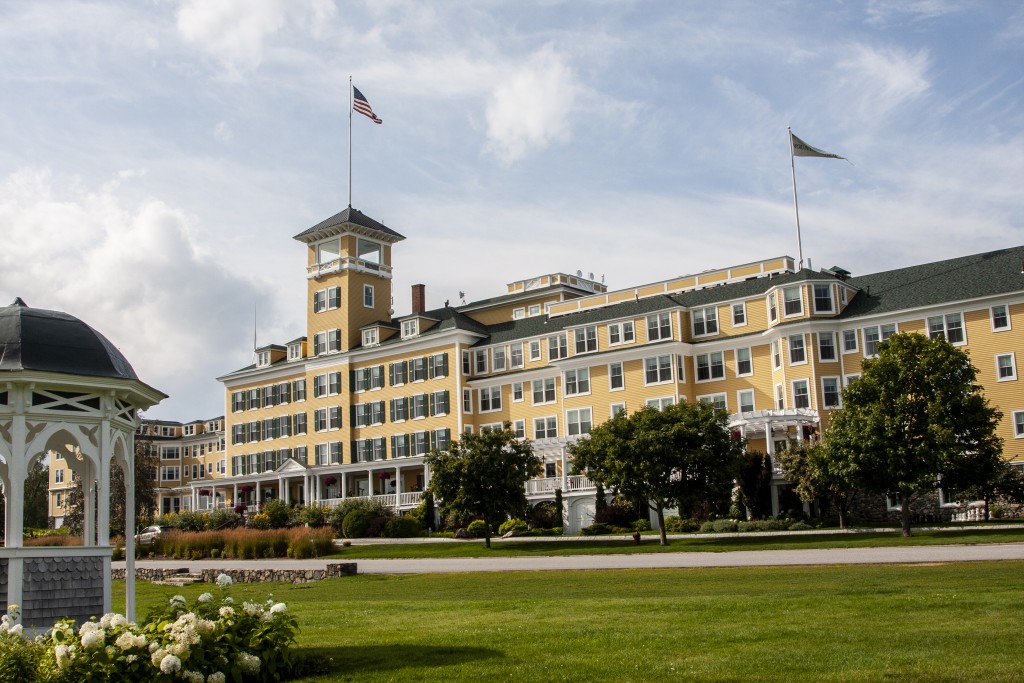 The Mountain View Grand is one of the few remaining grand hotels among the many that once flourished in the White Mountains. Photography by Stillman Rogers

Whitefield lies in a vale between two hillsides. Approaching either from the south on Route 142/116 or from the north on Route 3, you drop into the center of town. The valley was a natural choice for the railroads making their way through the White Mountains, and the town became a hub for freight and passengers.

The Boston & Maine Railroad, Maine Central, and the Concord & Montreal Railroad all passed through Whitefield, served by three separate depots. Take a close look at the current Dunkin’ Donuts on Union Street and you’ll see the unmistakable shape of the former station.

Not quite so obvious is a second one, moved from its previous trackside location and now the American Legion Hall, next to the fire station on Route 142/116. A third station was at Hazen, near the current Mount Washington Regional Airport.

All these train lines converging in one town, with their junctions and sidetracks, required some coordination. Alongside Union Street, where the Boston & Maine and Maine Central tracks intersected, you can still see the ball signal that indicated whether it was safe to pass through. Erected in 1875, the ball was still being used 100 years later, and was the last of these signals in use in the United States.

Union Street (Route 3) is Memory Lane for more than rail enthusiasts. Two shops between the old depot and the ball signal will interest fans of vinyl and vintage stereos. Chris’s Nostalgia Shop sells vintage records, cassettes, movies, CDs and other music memorabilia. If you long to hear Lena Horne in the original-cast album of “Jamaica” or the Bee Gees’ 20 greatest hits, or to throw a Motown dance party, Chris’s is the place to look.

For the equipment to play those 78s, 8-tracks and VCR tapes, cross the street to Blake’s Electronics. A fan of electronics since childhood, owner Eric Blake’s shop is an ever-changing collection of new and vintage audio, stereos, televisions, surround-sound equipment and guitars.

Union Street leads to Whitefield’s Common and King’s Square where, like the rail lines, three routes intersect — 116, 142 and U.S. 3. This is where the village of Whitefield began in 1815, when Asa King bought the lot that included what later became the Common. His son and son-in-law deeded the Common to the town as a playing field in 1833, and in 1875 the bandstand was added. By 1907, a 15-member band played summer concerts for locals and increasing numbers of tourists.

Unlike many New England village centers, King’s Square does not include the typical church. Instead, the two most prominent with their white spires, St. Matthew and the Community Baptist Church, stand on a rise overlooking Jefferson Road. Trinity Methodist is at the corner of Maple Street and Lancaster Road, and the tiny Episcopal Chapel of the Transfiguration on Elm Street has held services here each summer since 1895.

The most prominent building overlooking King’s Square is the mauve façade of the once-grand Allard Hotel, now empty, a reminder that tourism played a big role in Whitefield’s history. At the opposite side of the square is a lodging place more in tune with contemporary tourists, the Art Gallery Hostel. Loved by hikers, climbers and cyclists for its easygoing air, budget rates, and common areas where guests can share their day’s adventures, the hostel is run by artist Dave Holmander. His paintings hang throughout the hostel, which doubles as his studio and gallery. 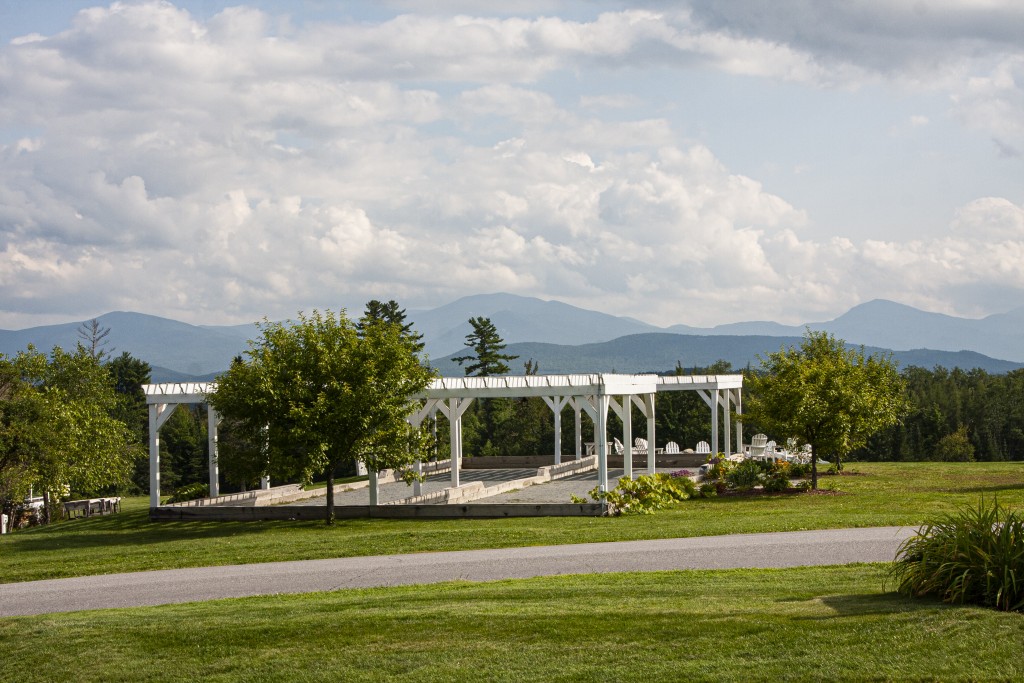 A view of the White Mountains from the terrace of the Mountain View Grand Hotel. Photography by Stillman Rogers

Tourists looking for more luxury, fine dining and a few rounds of golf with a view gravitate to the Mountain View Grand. Both the hotel and the view are grand indeed. This sprawling resort is the epitome of the grand hotels that once flourished throughout the White Mountains, the summer refuges of wealthy families escaping the cities’ heat.

They arrived by train and were met by a coach that brought them up the hill to revel in the view of the Presidential Range spread out before them. The hotel’s story is a long one, and seeing this beautiful building today seems like a miracle to those of us who remember it in the 1990s, porches sagging, windows out, rooflines slumping, and one wing barely standing.

The Mountain View’s first guests came by chance in 1865, when a stagecoach headed for Montreal overturned in a rainstorm. The Dodges welcomed the passengers to their farmhouse so graciously that the group stayed on and returned the following summer.

Thus began Mountain View House, a hotel that remained in the Dodge family until 1979. It closed in the 1980s and remained empty and deteriorating until new owners saved it with a $20 million restoration in 2002. New rooms and suites were added, as was the full-service spa in the tower. The hotel is on the National Register of Historic Places.

Carrying on the Dodges’ farming tradition, the resort maintains herb and kitchen gardens, and a variety of wool-bearing animals — six breeds of sheep, angora goats and rabbits, llamas and alpacas. Yarns produced here are sold in the small farm shop. The resort works closely with local farms and producers to supply its kitchens and has been awarded Certified Local status by the New Hampshire Farm to Restaurant Connection.

Across Lancaster Road from the Mountain View Grand’s entrance road is another long-standing attraction that brought tourists and White Mountain residents to Whitefield. Founded in 1966 by the late Tom Haas and Gibbs Murray (who is still very much a part of the theater), Weathervane Theater is part of an even older stage tradition in Whitefield. In 1934, New York Times art critic William Chase began bringing singers, actors and dancers from New York to perform at his barn in the summer, a tradition that continued until the Chase barn closed in 1962.

In 1966, Murray and Haas took up the banner, opening in a pair of connected barns on Lancaster Road as the Weathervane Theater. When the barns began to feel their age, a fundraising campaign resulted in the current purpose-built theater in 2002, seating 250 and with more staging potential. Murray’s unique gift was — and is — stage design, and the staging has always been a hallmark of Weathervane performances.

Theatergoers have several choices for pre-performance dining. Next to the Weathervane, The Inn at Whitefield serves both a dining menu and a pub menu of burgers and sandwiches. The Mountain View Grand has two options, farm-to-table fare in the casual Harvest Tavern, with terrace dining in good weather, or the more formal atmosphere of the 1865 Wine Cellar.