Winter Fun on the Lakes

Hard to call it a lake when it’s more like a huge white parking lot, but for those in the know, winter is the “secret season” on and around Winnipesaukee. 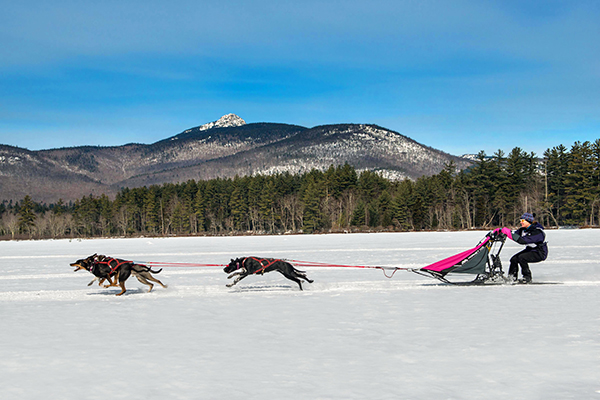 The iconic motor vessel Mount Washington is locked in ice. The boardwalk at Weirs Beach is nearly empty. Boats are beached and shrink-wrapped at marinas from Alton Bay to Wolfeboro. So what is there to do in the Lakes Region this time of year? Plenty. Let’s slide around the lake and see.

“Winter is the secret season in the Lakes Region because not everyone knows of its quiet charms,” says Ray Carbone, longtime local resident and author of the book “The Lakes Region of New Hampshire: Four Seasons, Countless Memories.”

Lynne Kelly of Randolph discovered the secret — sled dog racing. “It’s awesome,” she said after participating in her first competition on Lake Chocorua. Kelly and her sled were decked out in hot pink representing girl power — three of her four-Siberian huskies are female and wore pink harnesses while the boy in the bunch was decked out in black.

Behind Kelly, trucks with kennels were lined up at the edge of the lake. Dogs yipped in excitement as they emerged from their cages and were belted into their harnesses by their mushers who then queued at a truck dispensing steaming hot chocolate. The dogs were funneled through snow fences to the starting line for a staggered kickoff. Judging by the excited yelps, they couldn’t wait to bolt. “They love to run,” said Kelly of her canine team. And don’t mistake them for beasts of burden. “They’re spoiled rotten. They sleep with me.”

As the morning progressed, dozens of dog teams were cheered on by about 70 spectators as they departed and returned from the start/finish line. The weather was cold but crisp; a bright blue sky made way for the warmth of the sun reflecting of the snow-covered lake.

The New England Sled Dog Club Sled & Skijor Race on Lake Chocorua in Tamworth will be held on March 2-3, 2019.

Don’t let the sheltered players of the NHL fool you, hockey is an outdoor sport and the sixth annual New England Pond Hockey Classic in Meredith from February 1-3, 2019, teams from across the country will prove it on rinks marked off along the shore of Lake Winnipesaukee. Hundreds of teams are expected to compete for the coveted WinnipeHockey Cup.

Typically more than 200 teams from around the country participate, including last year’s team Johnny Cash from Rhode Island in the Over-40 Division and team Weekend Pass from North Carolina in the Over-30s.

“Anybody who ever put on a pair of skates knows how special it is skating outside instead of an indoor rink,” says Scott Crowder, executive director of the New England Pond Hockey Championship. “It gives people an opportunity to play the sport the way it was originally played.” 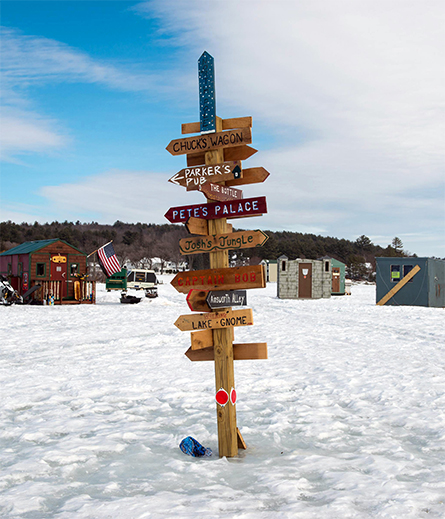 The bob houses on Lake Winnipesaukee take on the character of a small village, so this helpful sign directs visitors to their destinations. Photo by John Hession

And speaking of competition, how about the Meredith Rotary Club’s Ice Fishing Derby on February 9 and 10, 2019? Ice anglers throughout the area will converge on Winnipesaukee to set up their multicolored bob houses and compete for a grand prize of $15,000 and lesser amounts for the largest fish in a number of categories.

Crowds circulate around the weigh station at Meredith where a bulletin board posts the current leaders. There is an ice-top midway with carnival-like concession stands, selling chili, cigars, fried dough and French fries. Ice machines rocket across the lake, and even trucks and cars may be sighted rolling across the ice.

But you don’t have to know the difference between a pickerel and a trout to enjoy the festivities. Think Walter Matthau and Jack Lemmon in “Grumpy Old Men.” You can walk out on the ice and rub shoulders with the anglers in their heavy winter outfits. Check out the bob houses, some equipped with wood stoves, stereos, televisions and other amenities. Take a walk up the hill to A.J.’s Bait & Tackle on Mill Street, where contestants in coveralls congregate.

Of course, you don’t need to be a sportsperson to enjoy the area. When the snow sifts down from a battleship gray sky, Meredith becomes an enchanted village similar to a Brobdingnagian snow globe and the four inns and spa at Mill Falls offer a warm welcome. All are a short walk from the lake. Bay Point and Church Landing are right on the ice; Mill Falls and Chase House are across the street. You can work the kinks out at the Cascade Spa or Sacred Waters Yoga Studio, and there is a restaurant for every mood including upscale dining at Lago, Lakehouse Grille and Camp. Grab a pizza at Giuseppe’s or settle in at George’s Diner for comfort food like franks and home-baked beans or the chicken croquets that are more popular with the bob-house boys. 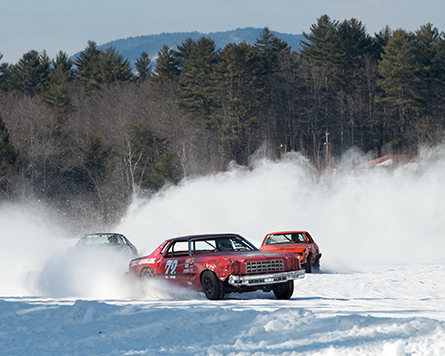 Four miles north of Meredith, you can dawdle over crab cakes or a brisket sandwich at Canoe while gazing at a sparkling winterscape. The dining room overlooks Center Harbor and the M/V Mount Washington cruise ship in its icebound winter berth. Rainbow-colored bob houses are sprinkled across the harbor where ice fishermen are trying their luck.

Unlike the busy summer months, the wait for a table is minimal and everything is more chill (pun intended).

Ice might look like an obstacle to navigation by boat, but in the early 19th century Frederic Tudor made his fortune cutting ice in local lakes and shipping blocks insulated by hay to the Caribbean, Europe and India. The Remick Country Doctor Museum and Farm in Tamworth will hold its annual ice cutting and winter festival on February 16, 2019. Participants can join members of the Yankee Teamsters 4-H club and help cut the ice, haul the blocks and tuck them away in the barn for summer use. There will be an exhibit of ice sculpture, horse-drawn wagon rides and other diversions.

In Moultonborough they’ve come up with a more modern use for the ice: automobile racing. The Lakes Region Ice Racing Club oversees races on Berry or Lee Pond, where cars with tire chains raise plumes of snow as they roar around a circular track. The cars of spectators line the edge of the pond, creating a succession of private, heated viewing stands. Races are held on Sunday when the ice is at least a foot thick.

There isn’t a better port in a winter storm than the Wolfeboro Inn, which has been welcoming visitors either as a private home, restaurant or inn since the War of 1812. Located on the edge of Lake Winnipesaukee and the edge of downtown, many of the rooms offer great views of the lake. There is a small ice skating rink on the grounds with an outdoor fireplace. Wolfe’s Tavern with its walk-in fireplace and hammered tin ceiling and hundreds of pewter flagons hanging in racks. Weekend nights it is a gathering place for locals and is a boisterous, friendly place.

A walk down Main Street can be a walk on the wild side when a bitter wind blows off the lake, but it’s not without its attractions. ”Jesus Loves you snow much” reads the flag in front of the First Christian Church. The town dock is forlorn, deprived of the throng that lines up when the Mt. Washington visits in the warmer weather.

Skiing
Abenaki Ski Area in Wolfeboro, community-owned and -operated since 1936, claims to be the oldest small ski area in the country and one of the 10 oldest in the country overall. It has seven downhill trails, 30 kilometers of cross-country trails and a small lodge heated by a wood stove.

Gunstock Mountain Resort on the other side of the lake, in Gilford, is a larger resort with 55 trails, 50 kilometers of cross-country and snowshoe trails, snow tubing, a zip line and other diversions.

Grab your Dr. Denton’s and your favorite quilt, and head to the ice at the Alton Bay Winter Carnival, (February 16-17, 2019) Among its highlights are a bed parade and race held on the frozen bay.

“Teams of five — four to push and one to ride — make up their beds, put skis on the bottom and push the beds across the ice,” says Roger Sample, a member of the Alton Bay Business Association, which along with the town of Alton sponsors the carnival each year. “We encourage the bed riders to wear helmets,” he says.

The Squam Lake Association will hold its annual Winterfest on February 16, 2019. Activities include a bonfire, chili contest, ice skating and sledding at the group’s resource center on Rte. 3 in Holderness.

A table at Garwoods Restaurant & Pub offers a great view of the icescape. You might even spot an iceboat sailing across the harbor. “It’s a fickle sport,” says Kate Turner, associate director of athletics at Brewster Academy. “You need glassy ice, either at the beginning of the season or when the water refreezes after a rainstorm. Melvin Harbor, Wolfeboro Bay or Lake Wentworth usually freeze early.”

Wolfeboro will hold its annual winter carnival on February 16-24, 2019. Among the attractions are a progressive cross-country ski dinner on a trail lighted with candles, a pancake breakfast, sleigh rides and fireworks.

Got game? If your specialty is indoor sports, Funspot in Laconia, which bills itself as “the largest arcade in the world,” is open year-round. You can play Donkey Kong and other vintage video games and pinball machines of all types. There is even a bowling alley downstairs. It can be packed during the summer season, but this time of year, not so much.

Just because it’s cold doesn’t mean that you can’t indulge in a sweet tradition on the lake. The 110-year-old Kellerhaus, the oldest ice cream and candy maker in New Hampshire, close to Weirs Beach, is open year-round too. This time of year you’re not likely to wait very long in line to indulge in the Lakes Region’s famous ice cream smorgasbord. And in February there are “Extra Scoop Sundae Sundays” — a free extra scoop to each sundae purchased. Too cold for ice cream? Each winter weekend the Kellerhaus offers free warm-up coffee, tea or hot cocoa.

The most unusual attraction and one of the best-kept secrets in the Lakes Region is the winter airport at Alton Bay, which, like an aviation Brigadoon, appears every winter when the ice is at least 12 inches thick. The 2,600-foot runway is open to single-engine aircraft and is operated by a faithful cadre of volunteers including airport manager Paul LaRochelle. He and his staff make sure the runway is kept plowed, smooth and safe. Brian Mitchell, who co-owns Amilyne’s Corner Market with his wife, is one of those airport volunteers.

“The funny thing is that none of us are pilots,” Mitchell says. “We’re doing it because of the history. This is the last FAA-certified ice runway in the continental United States.”

Joel Glickman and Phylise Banner, both college educators from New York  and both pilots, flew to Alton Bay one winter weekend, landed on the lake, and like so many other pilots had lunch at Shibley’s at the Pier, which has a bird’s-eye view of takeoffs and landings, before heading back home.

“It’s a pretty exciting thing to do,” said Glickman. “You’re going 75 miles per hour. You don’t use breaks when you land on the ice and the runway is only 2,600 feet long and 100 feet wide. A crosswind can make it tough and it can be a little hairy, but Paul [LaRochelle] and the other volunteers make it all happen and make it as safe as possible.”