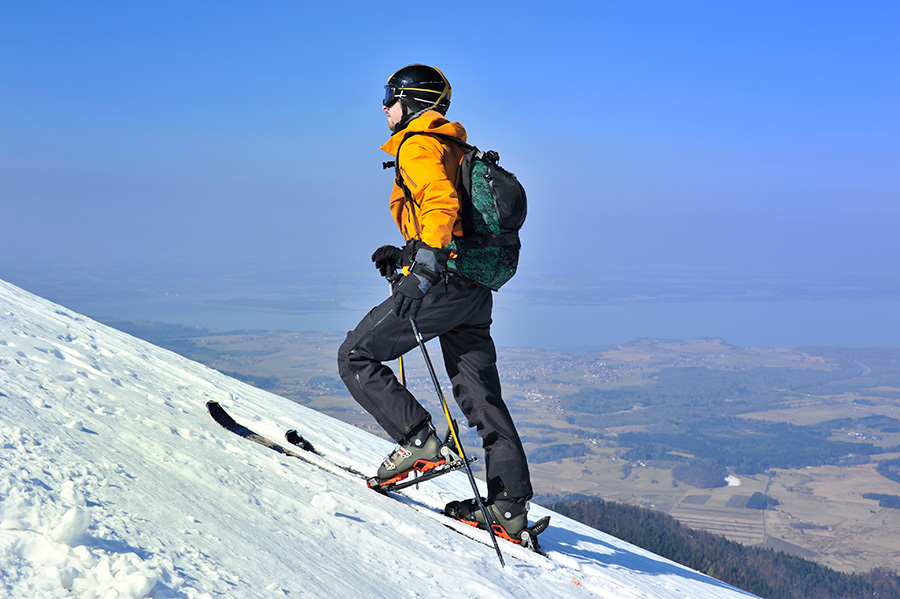 An uphiller makes the climb on the way up, before the ski down at Cranmore Mountain.
Photo by outdoorphotographie

When his children are in the ski programs at Cranmore Mountain Resort in North Conway, season pass holder Paul DegliAngeli uses the precious time to hit the slopes. But he doesn’t make a straight line to the high-speed quad or any lift for that matter.

He starts skinning up.

Uphill skiing, also known as “skinning,” puts participants at the top of the mountain under their own power — no lifts for these endurance addicts. They use skis fitted with special bindings and adhesive skins that line the bottom of the skis to provide enough grip to prevent slipping backward. Once they get to the top, the skier peels off the skins, locks in the heel bindings and heads back down using the same equipment they just used to climb up in.

So as DegliAngeli begins his ascent, upstream as it were, there are typically some interesting comments from skiers and snowboarders going the downhill way. Inevitably, DegliAngeli is stopped by those with heels affixed to bindings.

“The most popular comment is, ‘Hey, you’re going the wrong way,’” he said.

For DegliAngeli, it’s all about exercise and fun: a great workout. They’re curious about what he’s doing.

Whether it’s for training purposes, for the sheer exhilaration of spending time in the backcountry or “earning your turns,” uphill skiing is gaining in popularity among those craving the endorphin rush as much as the speed typically associated with alpine pursuits. Here’s a few tips, terms and need-to-knows for anyone new to uphill skiing:

Talk the talk: Uphill skiing is alternately referred to as skinning, AT skiing, ski mountaineering or randonee skiing.

Gearing up: Skinners normally use alpine touring skis designed for the pursuit — they’re lighter, which makes getting uphill a bit easier. Some feature notches, which help when attaching the climbing skins.

Skin in the game: Skins are pre-cut pieces of material that attaches to the bottom of the skis, gripping the snow and allowing the skier to make his or her way uphill without sliding backwards.

Bindings and boots: Touring bindings allow the skier’s heel to move freely, allowing for a stride that’ll carry them along the trail and upward. The boots allow for a better range of motion, providing the ability to hike and skin.

Skinning safely: Experts recommend the tried-and-true, “know before you go” approach, and bringing along a shovel and probe, an avalanche beacon, extra gloves and an insulation layer, and plenty of fuel and hydration to keep
you going.

Technique: Think long, smooth strides, according to experienced skinners. Lift your ski just enough to clear the plush of the skin. Keep your chin up, breathe, keep your core stable.

Play by the rules: Stick to designated routes, times and stay safe.

“They want to know how the equipment works so I’ll stop and show them,” he said. “I’ll point to Mount Washington and tell them I don’t have the time to go there, but by doing this, you can stay fit and also enjoy the backcountry when you have the time.”

Backcountry skiing and New Hampshire are forever linked, forged by access to monumental runs on the east shoulder of Mount Washington in iconic Tuckerman Ravine. A spring mecca for skiers and snow-boarders carrying their gear to ski the narrow steep challenges, the discipline is finding another home at downhill ski areas that began embracing uphilling a few years ago.

Better gear, demand and the rise of the nonprofit Granite Backcountry Alliance which promotes and reclaims trails in New Hampshire and western Maine have helped the uphill renaissance. Skinning at ski areas provides convenience plus safety and snowmaking on trails, a boon during scarce natural snow times.

Conversely, doing alpine touring or AT on groomers also helps people prepare for the backcountry especially if they are rookies to the discipline and are trying out new equipment.

Being spotted by curious weekend warriors isn’t the only place to see uphillers. Events are on the rise.

The Winter Wild Series has skiers and snowboarders plus runners and snowshoers trekking up and down ski areas across New England in the morning’s wee hours before the lifts open. Black Mountain in Jackson has them engaged under the stars by the light of their headlamps during its Friday night series. Last season Cranmore started its Meister Tour Series as part of its long-running citizen racing program Moun-tain Meisters.

“It was two laps, up the South Slope, and down a series of gates on the North Slope, with a mass start,” said Cranmore Marketing Director Becca Deschenes.

The Hannes Schneider Meister Cup Race, a fundraiser for the New England Ski Museum, introduced skinning to its weekend with a night tour in 2009. That morphed to the Schneider Sprint in the 2017-18 season, a more competitive race.

Cranmore donates $20 from each Uphill Season Pass sale to Granite Backcountry Alliance to promote the sport of backcountry skiing.

Andrew Drummond’s a driving force behind the free-heeling bulge. The multi-sport athlete and owner of the alpine touring shop Ski the Whites at Black Mountain in Jackson first skied Tuckerman Ravine at age 12 and is now a GBA board member and race director starting those series at Black and Cranmore, and at Shawnee Peak
in Maine. 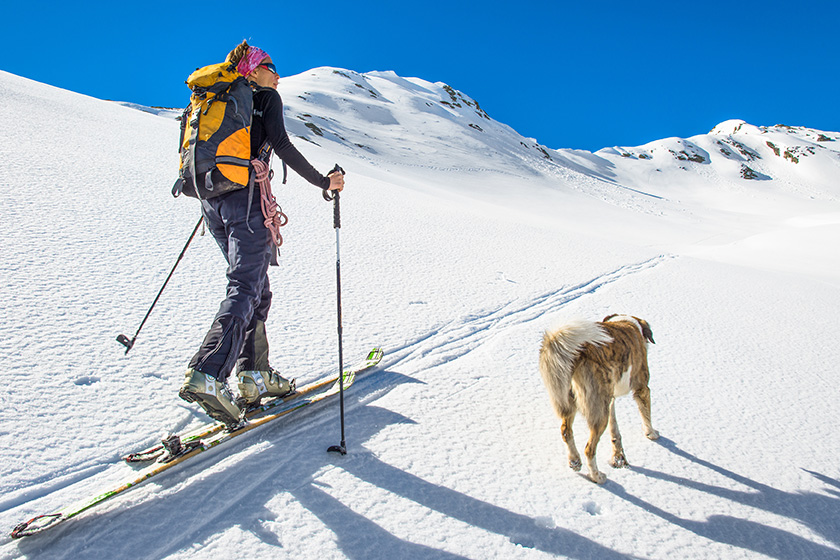 Along with getting a terrific workout, uphillers have the opportunity to experience winter in it’s solitude and beauty, away from the sometimes crowded downhill slopes.

Under the glow of a headlamp, free-heelers trek up Black Mountain when the lifts are closed during the Friday Night Lights series that started two seasons ago. With an affinity for night touring and seeing the need for community events for the backcountry community, the event has grown to include 450 participants of all ages from across New England. New to the sport? Reserve backcountry gear for it, and demo it as the series is also an outdoor lab to try the discipline out.

“Getting the chance to skin a lap uphill in the gear before committing to a likely expensive purchase will ensure that you’re setting yourself up for the best backcountry experience possible,” Drummond said. “This means finding the balance of fit and performance. There are an overwhelming number of back-country boots on the market, so find what works best for you.”

Drummond says there’s no better way to travel in the mountains than on a modern backcountry setup.

“It has been a blast to watch the backcountry community flourish over the last several years,” he said. “It’s not just one demographic either. We see kids getting junior setups and parents looking for ways to stay active while their kids are in ski programs.”

Skinning is a lot more friendly that its name implies. Yes, there are reasons for chairlifts, but self-propelled uphill travel is a great workout and can be exhilarating. Though skiing can often be a solitary experience, doing it with friends and like-minded individuals makes it social and fun.

And going uphill is only part of the endeavor. Going downhill is the just reward for slowly getting yourself to the top.

Entering the uphill domain requires alpine touring gear that gives you flexibility for the trek up and steadiness for that cruise down. Instead of traditional alpine ski boots, AT boots are designed for both modes of travel allowing for greater pliability during the walk or jog up and stability for the schuss down.

AT bindings allow free-heeling skiers to make the switch, giving them the freedom to lift their heels with each stride and then by clamping down the heel piece after the climb to allow for the downhill run similar to one in traditional alpine boots.

Skis tend to be lighter than traditional alpine skis, while snowboarders use a split board that comes about in two halves, good for the way up, and then returns to one board for the ride down.

Then there’s the skin, made of mohair (goat hair) or nylon, or a combination of the two. One side has a reusable adhesive that sticks to the skis while the other side only slides one way, allowing for grip on the hill to prevent slippage. Peel them off at the top and ski down. 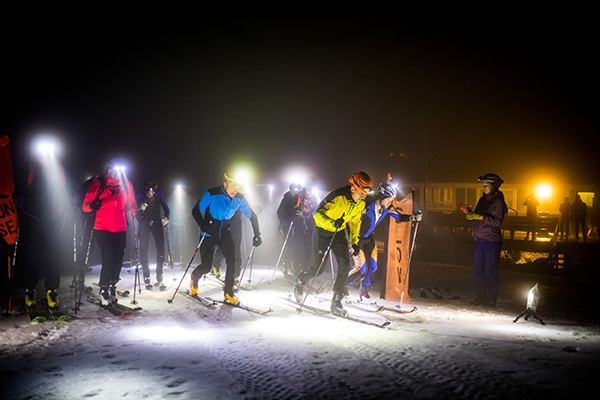 The Friday Night Lights series at Black Mountain in Jackson attracts skiers from around New England.
Photo by Andrew Drummond

For the most part, ski areas that allow uphill travel do so on designated routes during set hours. Those doing so must have a valid season pass, lift ticket or purchase an uphill access- type of ticket.

At Loon, in Lincoln, uphill travel is allowed on certain trails two hours before the resort opens and during resort operating hours. A practice done for safety concerns.

“There are challenges from an operational perspective, which is why we created our uphill access policy,” said Communications Manager Greg Kwasnik. “We wanted to create an environment where people traveling uphill would have a minimal impact on operational assets like groomers, snowmaking equipment and snowmobiles — or skiers and riders traveling downhill during regular operating hours. That’s why we allow uphill travel only on certain designated routes and hours.”

“The biggest safety concern we have is with people that skin up the mountain at night or during times when it’s not permitted, while we are actively grooming and snowmaking,” said Cannon marketing director Greg Keeler. “While we have not had any accidents, groomers often report skinners skiing right behind groomers or coming upon them unexpectedly. That presents a huge safety hazard especially with our winch cat, which may have 1,000 feet or more of cable at tension stretched down the trail.”

Though people generally stick to the rules during the day at the Franconia Notch State Park ski area, those night travelers could be spoilers.

“The more we see of that, the more it puts the whole program in jeopardy,” he said.

In 2018-19, Cannon sold 235 uphill tickets at $15 each, but the number of uphill travelers is higher because Cannon season pass holders are allowed with their pass.

“We feel the need to charge a reasonable price for a skinning ticket because we spend millions of dollars on snowmaking and grooming which are both required to provide skiing — up and down — in winter,” said Keeler.

“We’re always working to expand the winter activities we offer, and we’ve seen increasing numbers of guests traveling uphill in recent years,” said Kwasnik. “Our uphill travel policy allows this growing group of skiers, snowboarders and snowshoers to enjoy the mountain in a way that doesn’t conflict with mountain operations or our downhill-only guests.”

So check the mountain report at ski areas, obey the rules of the mountain, be courteous, give the downhill skier the right of way and head uphill.