Tunneling to the Great Bay by Bike

The Rockingham Recreational Trail isn't the fastest way there, but it's worth the ride. 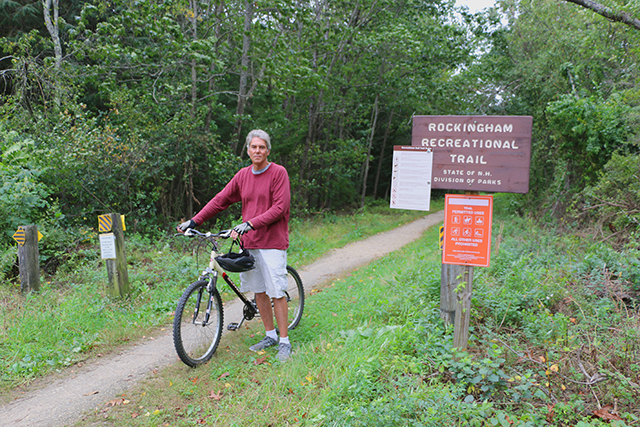 Rob Sneddon on the trail with his “antique” Schwinn mountain bike

That explains, more or less, what drew me to the Rockingham Recreational Trail. Well, that and the fact that the prospect of a long bike ride always turns me into a kid again. (How old am I? Put it this way: The Schwinn mountain bike that my wife gave me for my 40th birthday is now an antique.) 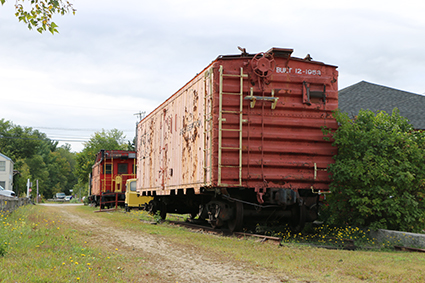 The Rockingham Recreational Trail follows an old railroad, where train cars can still be seen along the way. Photo by Rob Sneddon

The unpaved trail stretches for 27.5 miles along a defunct rail line between Manchester and the abandoned Rockingham Junction depot in Newfields. Passenger service on the line — once called the Portsmouth Branch of the Boston & Maine Railroad — began during the Civil War and continued for 100 years. (Freight service ended in 1982.) Pedaling the length of the trail gives a sense of what it was like to travel in New Hampshire before the car culture arrived. (The state motto really should be Live Free and Drive.)

The 21st century recedes as you pass through long stretches of woodlands and wetlands. If you start at the trail’s eastern end, you don’t have to ride too far to see how the adjoining Ash Swamp Road got its name. You skirt Onway Lake in Raymond and Massabesic Lake in Auburn, along with smaller bodies of water such as Hook Brook and the Piscassic River. Monolithic granite outcroppings loom along the edge of the Dearborn forest, blending in with the dark trees so well that it would be easy to miss them.

Fair warning, though: Don’t expect total solitude. At times, especially on the western end, the trail veers uncomfortably close to civilization’s service entrances, loading docks and garages. You feel like a trespasser, like you’re cutting through your neighbor’s yard. One homeowner whose property abuts the trail apparently shares that sense of violated personal space. A crude sign reads TURN BACK — the intent, apparently, to instill an “Abandon All Hope Ye Who Enter Here” level of impending doom that would discourage people from continuing.

So if you’re looking for an extreme mountain biking experience, the Rockingham Recreational Trail isn’t it. Even in the deepest and darkest stretches of woods, you’re aware that you’re following an old railway line. The grade is level, the curves are gradual, and the route is so straight that the canopy of trees resembles a tunnel. It’s like looking the wrong way through a telescope.

But that enhances the experience, at least for me. I enjoy seeing vestiges of New Hampshire’s railroad heyday. The most obvious are in Raymond, where the old depot on Main Street has been converted to a historical society. Several pieces of rolling stock, including a rusting Boston & Maine caboose, sit alongside. A little farther east, where the trail leapfrogs the Lamprey River, are a couple of steel-beam railroad bridges that date to the 1940s. Solid wood decks make the bridges passable for bicyclists.

Time and the transportation infrastructure have moved on since the trains stopped running. A cooperative of bicycling and snowmobiling organizations maintains the trail and has improvised smaller bridges through marshy areas. There are also tunnels under roadbeds that obviously could never have accommodated trains. 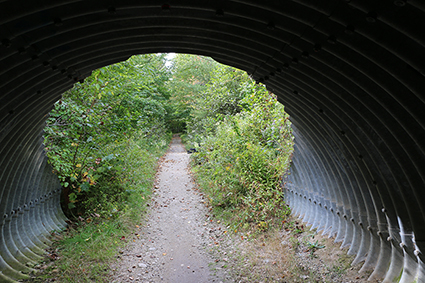 The tunnels on the trail are actually repurposed culverts. Photo by Rob Sneddon

Actually, the “tunnels” are nothing more than repurposed culverts. A rider with severe claustrophobia might not be able to handle them. In the longest and darkest tunnel, which passes under both barrels of Route 101 in Candia, the ceiling was so low that I decided to walk my bike through it. The interior was dim and the wooden planks that served as a bed gave a little with each step, adding to the slightly creepy aspect.

Coming out the other end was liberating. It felt like tunneling to freedom — a reminder that I was traveling outside the jurisdiction of the New Hampshire Department of Transportation. I was free to set my own pace.

It was a pace considerably slower even than rail travel of a century ago. According to a 1918 railway timetable, the trip from East Manchester to Rockingham Junction took an hour and four minutes. It took me most of an afternoon. Still, as I approached the end of the trail back at Rockingham Junction, I felt a connection with the railroad travelers of the early 20th century. Two active lines still converge just past the old depot. One of those lines leads to Boston; as I was completing the last leg of my ride, the southbound Downeaster clacked past after its 3:30 p.m. stop in Durham.

The other active line is what remains of the original Portsmouth Branch. Pan Am Railways now uses it to transport propane a few miles to a terminal in Newington. A locomotive sat at idle across the road as I dismounted from my ride.

After wrestling my heavy, ancient mountain bike into my car, I took a last backward glance at the abandoned depot and the idling engine that sat at the end of the line. Then I pulled onto Route 108 and rejoined the Seacoast’s highway grid — and the 21st century.

Somersworth resident Rob Sneddon is a longtime journalist who has published two books, “Boston’s 100 Greatest Games” and “The Phantom Punch.” In addition to pedaling the length of the Rockingham Recreational Trail, he has bicycled across the country and flown around the world on the Concorde.