Soak up the history of this storied town 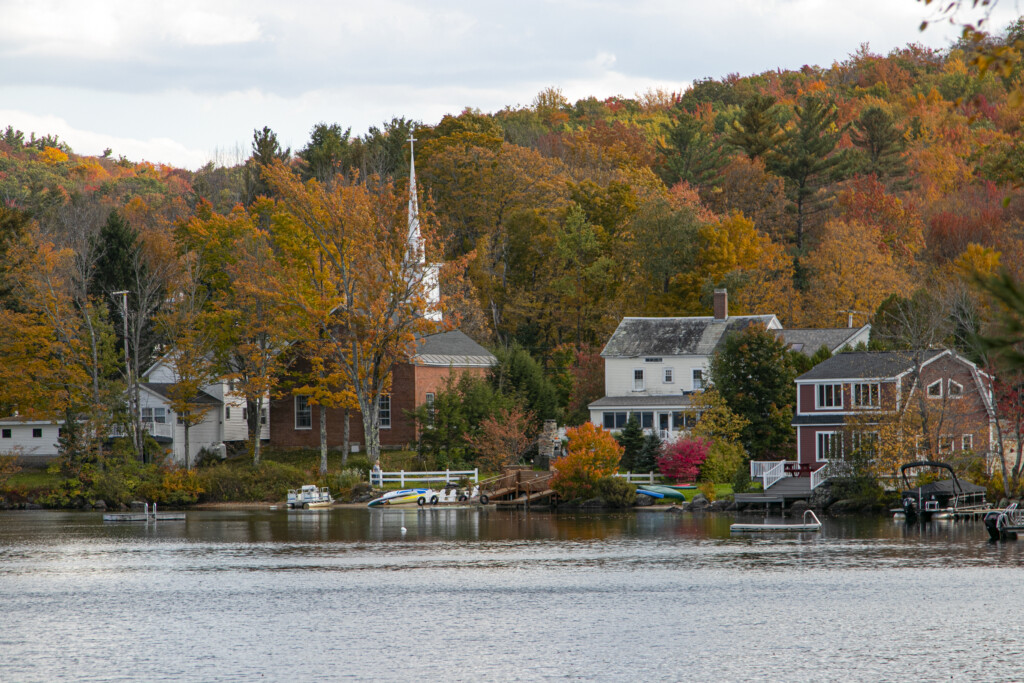 How did a New Hampshire town come to be named for a British Naval war hero at the same time that the U.S. was engaged in war with Britain? This show of Yankee cussedness was born of dual frustrations.

In 1751, the land was granted to a group of proprietors who were responsible for finding enough settlers to form a town. One of them was Thomas Packer, for whom the town was named Packersfield. He never lived here — but his son, Thomas, eventually did, and was not popular because of his high-handed dealings and failure to deed 500 acres as town land, as required by the original naming right.

So in 1778, the town petitioned to have its name changed to Sullivan, after the New Hampshire general. The petition wasn’t granted, even though the current town of Sullivan wasn’t formed until nine years later. In 1783, they petitioned to change the name to Groton, but it was already taken. In 1814, they tried for Troy, and while the town of Troy had not been officially granted the name, it was evidently spoken for already.

In June of 1814, Packersfield finally got its long-desired name change, this time choosing Nelson. Which brings us back to honoring a British war hero while the country was engaged in war with England. Several factors may have been at play.

The choice of Lord Nelson was quite possibly inspired by an American branch of the Hardy family who were early settlers here. Captain Thomas Hardy was Admiral Nelson’s aid and flag captain, and it was likely that his relatives suggested the name. Its significance struck a chord with locals frustrated at the war and U.S. policies.

Jefferson’s Embargo Act, designed to protect American industry by prohibiting trade with England and Canada, was hated by New England farmers whose livelihood depended heavily on trade. There was significant pro-British opinion, some of it boiling to the point of leaving the Union. Naming the town after Admiral Lord Nelson may have had a “take this!” motive. 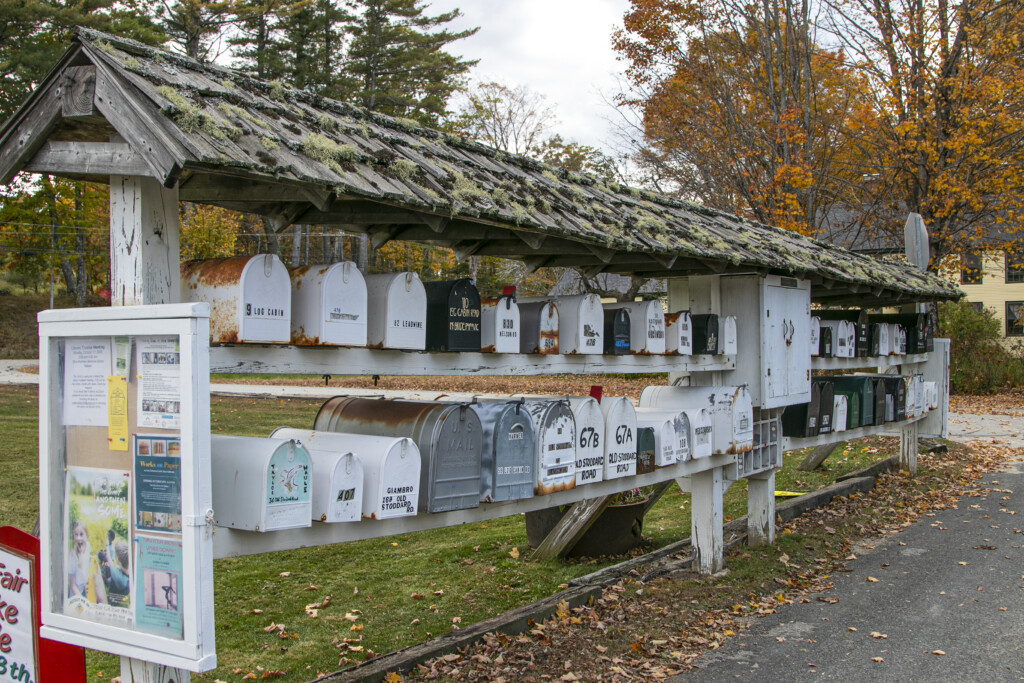 A row of mailboxes on the Common serves as an unofficial Post Office.

Not only did the town have a different name in its early days, it had a different center. The original settlement, with a meeting house, schoolhouse, training field and cemetery, was on a hill not far from the current center. A stone in today’s Nelson Cemetery notes this, and below, among the oldest grave markers, is a tall fieldstone monument with a lengthy inscription honoring Packersfield men who fought in the Revolution.

Mills were an early priority as settlers cleared and farmed the land, and the first gristmill was built around 1771, at the outlet of Silver Lake. Two other mills followed here, and a tannery opened with a bark mill in 1803 to process bark for tannin.

We found the remains of one of these old mills above Bailey Brook Falls, off the Old Stoddard Road. Part of the dam is still there, with remnants of the sluice and piers that held the shaft of a water wheel. Originally a sawmill, it later produced wooden tool handles.

The first real manufacturing began in 1814, with the building of the Nelson Cotton and Woolen Company factory at the outflow of Granite Lake, soon adding a boarding house for workers (which is still standing and now a private home). This was the beginning of a lakeside community known as Nelson Factory, but mill owner Avan Munson wanted a classier title and renamed the post office in 1849, coining it Munsonville. Munson sold the factory to the Colony of Keene, who later turned it into a chair factory that produced as many as 30,000 porch chairs annually.

Unhappy with the doctrines of Nelson’s Congregational Church, some of the Baptist residents of Munsonville opted to form their own and, in 1819, built a brick church overlooking the lake. It later became a community center and then a Methodist Church that’s now known as the Chapel-by-the-Lake.

Meanwhile, by the late 1830s, the village center was migrating down the hill to surround the wide common we see today. The new village was laid out in 1839, and construction of the new Congregational Church began in 1841. The old meeting house was torn down and parts of it were used to construct a new town hall in 1846, completing the ensemble surrounding the common. 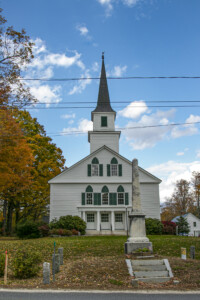 Today Nelson has no post office, but on the common opposite the church is a long bank of mailboxes. Facing the common from the opposite hillside is the original Olivia Rodham Memorial Library, named for the botanist and scholar who made Nelson a center for writers and artists.

The 1924 library building was replaced by a larger one in 1997, and the original building was restored and used for meetings, lectures, programs and art exhibits, a fitting tribute to the founder of what became known as the Pennsylvania Settlement.

This group began as visitors of Olivia Rodham’s house — fellow scholars and accomplished artists who shared her interests. They eventually moved to Nelson permanently — or at least seasonally — to pursue their work in rural quietude; many were former colleagues at Swarthmore and most were from Pennsylvania, hence the name. This was in the early 20th century, a time when such colonies of artists and writers were forming in other rural areas, including Cornish and Dublin.

Descendants of the original Pennsylvania “colonists” still live in Nelson, and over the years the town has continued to draw writers, artists and other creatives. World War II correspondent and author Lael Wertenbaker lived here after leaving Time; poet May Sarton lived in a house facing the common, and like Olivia Rodham, is buried in the Nelson Cemetery.

The most published writers are longtime natives of Nelson — namely members of the Tolman family. Newt Tolman’s “North of Monadnock” and “Our Loons are Always Laughing” are classics of New England humor and small-town life.

In addition to their writing, the Tolmans were a musical family; Newt’s first wife, Beth, co-authored the definitive guide to country dancing. Her co-author was fellow Nelson resident Ralph Page, a well-known square dance-caller and authority on American folk dancing. Page’s musical tradition is alive and well in Nelson, where country dance enthusiasts gather for the Nelson Monday Night Contra Dances, sponsored by the Monadnock Folklore Society. 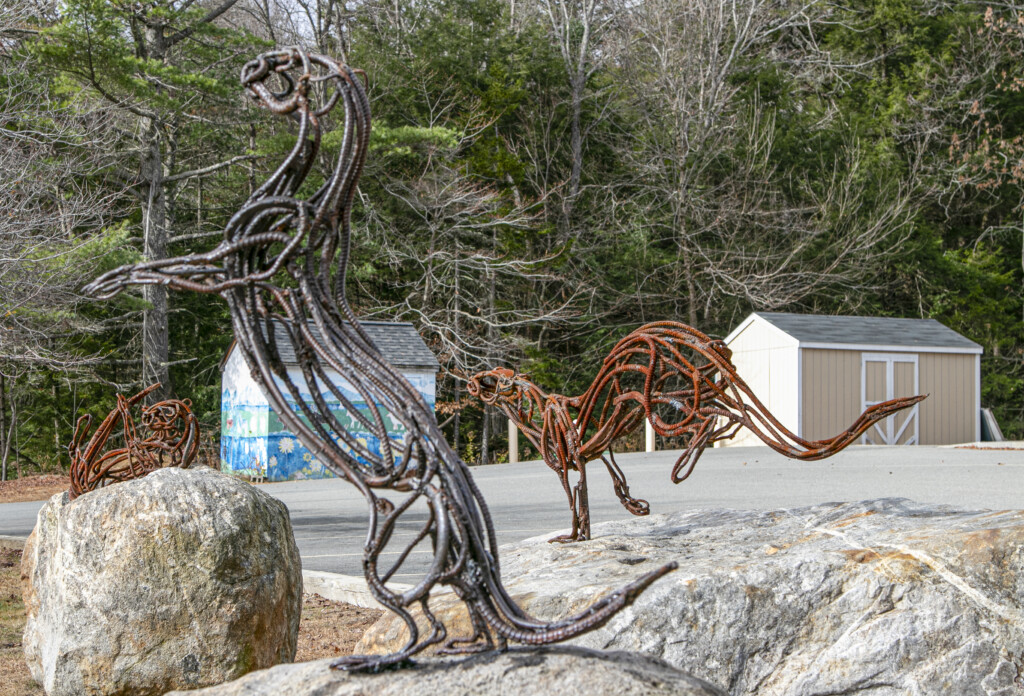 Metal sculptures by Nelson artist Wendy Klemperer are shown in galleries across the country, and she recently received the Keene Sentinel’s Ruth and James Ewing Arts Award in 3D visual arts. Her sculpture in the schoolyard of the Nelson Elementary School depicts a group of playful otters cavorting on large rocks, an artistic nod to the real otters that children occasionally observe in the pond across the street.