Discover sports, history, shopping and more in this small town 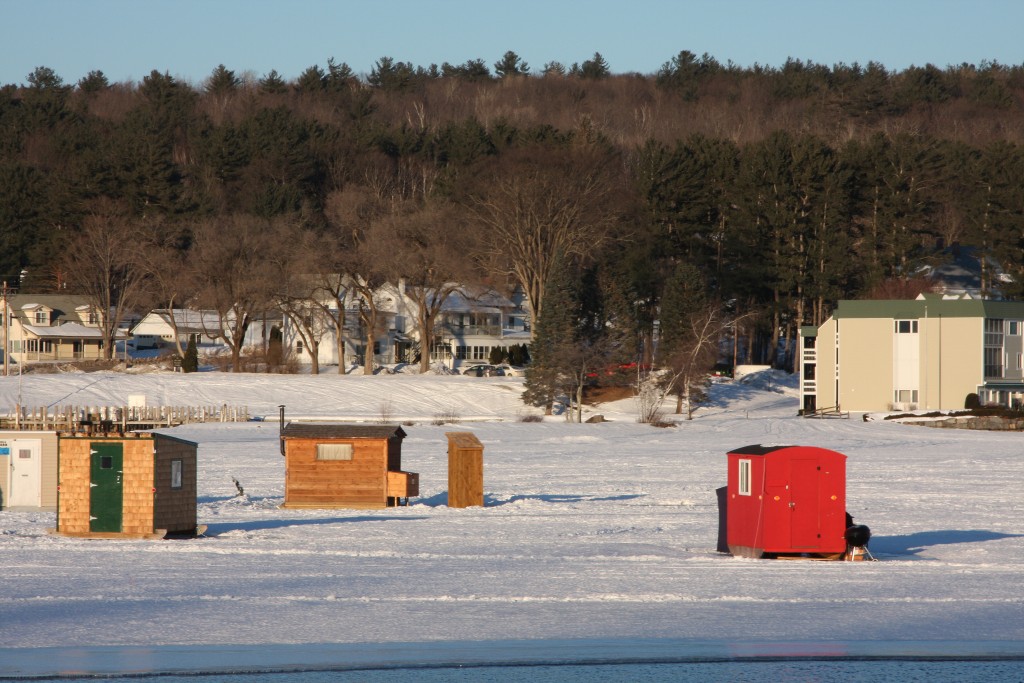 Bob houses on the ice in Meredith. Photo by Stillman Rogers

When we think of centers for winter sports in New Hampshire, North Conway may come to mind first, but Meredith has as fair a claim. Wrapping around Lake Winnipesaukee’s long Meredith Bay and incorporating more than a dozen islands and islets, the town is plentifully endowed with ice — and ways to play on it.

The most apparent to midwinter visitors is ice fishing. A village of colorful little bob houses appears in the bay as soon as the ice is thick enough, and weekends bring a block party atmosphere as people gather to fish and socialize. Each February (the weekend of February 13-14 this year), the Meredith Rotary Club sponsors one of the region’s biggest winter events, the Great Meredith Rotary Ice Fishing Derby. But anyone can enjoy the sport, with ice-fishing tackle, bait and advice from AJ’s Bait & Tackle. NH Fish and Game offers free ice fishing classes throughout the state.

The previous weekend, February 5-7, the snow is shoveled off enough of Lake Winnipesaukee to create seven ice rinks for the annual New England Pond Hockey Classic. Last year, it drew 77 teams to play hockey the way it began, when it was a hometown sport. Childs and Prescott parks in Meredith have ice-skating rinks, and the beach near the boat ramp on Lake Waukewan is a favorite local skating spot.

While Winnipesaukee gets all the attention from tourists, the commercial center of Meredith actually lies on a narrow strip of land between two lakes: Meredith Bay on Winnipesaukee and Lake Waukewan. Come back in the summer to find a low-key beach here with free parking. Waukewan Highlands Community Park has trails for cross-country skiing and snowshoeing, as does Hamlin Recreation and Conservation Area in Meredith Center, if you want outdoor fun off-ice.

The idiosyncrasies of Meredith’s boundaries give it a pie-slice wedge into Squam Lake and even bits of the shoreline of Second Neck, in Moultonborough. It also includes Bear Island, the second-largest unbridged in the lake, accessed only by boat. Its name, I learned from an article by Marshall Hudson in this magazine about a year ago, relates to an unfriendly encounter between a team of surveyors and some hungry bears in 1772.

It was this article that satisfied my curiosity about St. John’s on-the-Lake, one of the most interesting of New Hampshire’s many summer chapels. Like many of these seasonal churches, St. John’s is built of stone, but unlike the others, its shingled bell tower dwarfs the rest of the building. This tall, square tower has nearly as large a footprint as the single-story stone building and is topped by a roofed observation deck.

The 60-foot bell tower is built around an 1898 observation tower at the island’s highest point, incorporating its upper platform and roof. Nondenominational services are held here during the summer, with non-island worshipers arriving by boat. 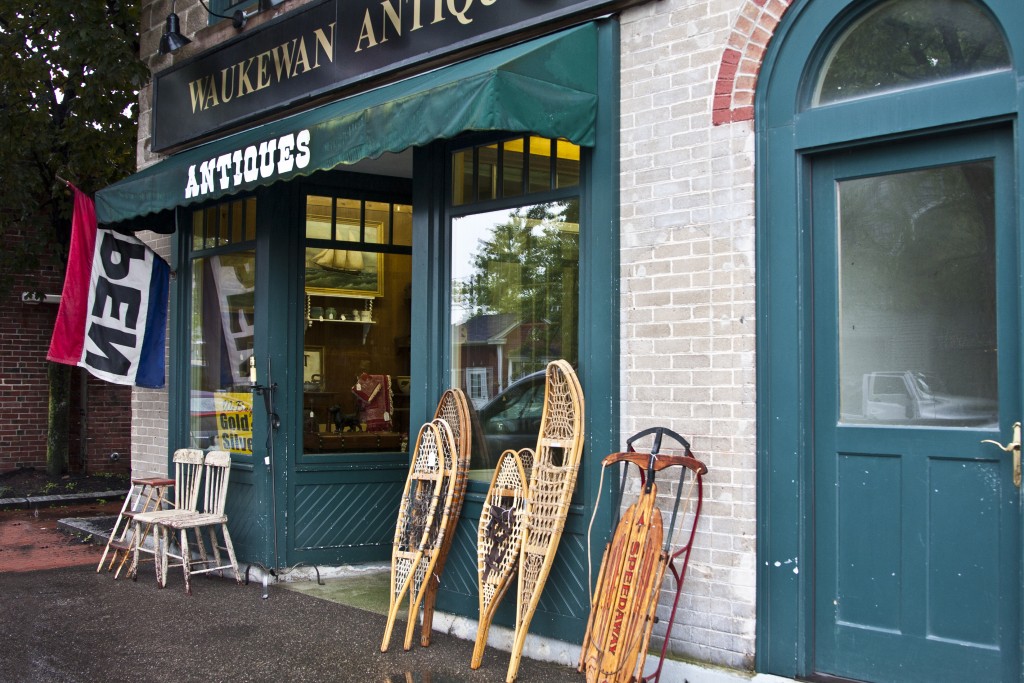 You’ll find everything from vintage snowshoes to vinyl at Waukewan Antiques. Photo by Stillman Rogers

Another church, the First Free Will Baptist Church, was built about 1802 and remodeled in 1848 into a good example of a mid-19th century rural Greek Revival architecture. On the National Register of Historic Places, it now houses the Meredith Historical Society Museum and is filled with reminders of past winter sports and industries. Wooden skis, rawhide webbed snowshoes, strap-on ice skates, a sleigh, and a variety of sleds are well displayed, along with an exhibit and implements used in harvesting ice from the lake (including an old-fashioned chest icebox). Displays highlight other 19th-century rural and farm activities, with photos, equipment and tools to illustrate them.

To add to — or create — your own history museum, stroll up Main Street to Once New Vintage Wares & Salvage, a warren of rooms filled with an eye-boggling miscellany; farther along Main Street, at Waukewan Antiques, you’ll find country pine furniture, and treasures ranging from old wooden kitchen utensils to vintage vinyl. Or go retro and buy a pair of bent-wood snowshoes and head for the trails.

Other shopping possibilities in Meredith are more contemporary in style. The nine shops in Mill Falls Inn & Marketplace range from rustic furniture and art-to-wear to fine arts and Winnipesaukee-themed clothing and souvenirs. Along with clothing (think hand-painted silks), Adornments & Lady of the Lake carries designer jewelry and smart accessories.

Nahamsha Gifts is known for cheeky T-shirt designs, such as their “wicked smaaht” shirts. At Cozy Cabin Rustics, locally made furniture in cedar, pine and birch is designed to fit in a lake cottage setting. After a quarter-century in Meredith, Innisfree Bookshop is a local institution, with a book-loving staff to offer suggestions.

To appreciate the range and depth of local artists’ and craftspeople’ talents, walk up the street to the League of New Hampshire Craftsmen gallery. Works in glass, wool, wood, silver, iron, paper, precious stones, ceramics, silk and nearly every other medium create a kaleidoscope of colors and designs.

One local artist’s work is known the world over. When the family chicken farm wasn’t producing a living, Annalee Thorndyke put her art talents to work designing and making the felt dolls whose winning grins made everyone smile — and want to own one. They soon became collector’s items and, although Annalee died in 2002, her legacy lives on in Meredith’s Annalee Outlet Store.

Whatever you choose to do in Meredith, there’s always a place to eat nearby. Three restaurants in the locally owned Common Man group — Lakehouse Grille, Lago and Camp are within sight of the lake, and Hart’s Turkey Farm is just up the hill. Or for lunch, chose crêpes with an international flair at 48 Main Cafe & Crêperie.