Celebrating 150 Years of Train Trips “to the Moon” 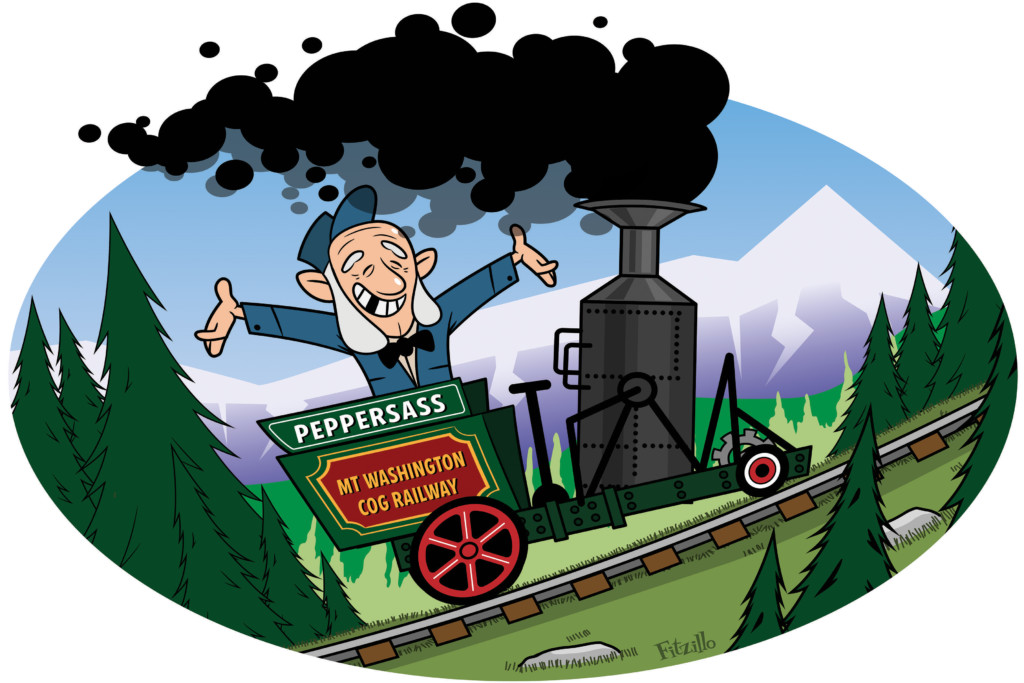 When discussing the great mountains of the Northeast, the Mainer says, “Katahdin’s the highest.”

“Katahdin?” says the fella from New Hampshire. “What about Washington?”

Yes, you can, if you’ve got a vehicle with a strong engine, a transmission that’ll gear down, and good brakes for the return trip. (The top hit on a Google search of “Mt. Washington Auto Road” is GEICO.) Be sure to gas up — no Irvings on the Auto Road.

And top off the transmission fluid. My husband, John Rule, worried that his mother would be scared of the breathtaking turns along the narrow road with drop-offs that nobody wants to drop off of and no stinkin’ guardrails. But the old lady surprised him.

She hung out the window of the pick-up, Polaroid in hand: “Johnny,” she squeaked, “can you get a little closer to the edge for the pitcha?”

“No, Ma.” His white-knuckled fingers clamped the wheel. To the left was mountain. To the right nothing but sky. “And slide yourself back in the cab before you tip us over.”

The official Auto Road website cites the delights of “ever-changing weather extremes” and “the opportunity to pass through four distinct climate zones.” Mt. Washington is generally a lot colder — three climate zones colder — on top than on the bottom.

“The allure and mystique” of the drive, the site suggests, may be enhanced by “panoramic views,” “dramatic cloud formations” and “high winds.” In 1934, one gust was clocked at 231 miles an hour. Locals call that some brisk.

If you and your car aren’t up for the 7.6-mile ascent on mostly tarred road, you can grab a guided tour in a van. Or ride the Cog.

As every New Hampshirite worth her road salt knows, in 1858 Sylvester Marsh got the idea to run a train to the peak — after he tried walking up, got lost, and nearly died. When he asked the New Hampshire Legislature to bless his plan, a few problems loomed: The mountain’s height — 6,288 feet. The steepness of the slope. The rocky terrain. And the weather, aptly declared “the worst in the world.”

The Legislature — in its wisdom — told Marsh to go ahead and build his train, but he might just as well “build a railway to the moon.”

Eleven years later, the steam engine, Old Peppersass, was pulling cars of wide-eyed tourists to the top. The hairiest section of track is called Jacob’s Ladder — a 37-percent grade on a 30-foot high trestle.

Some days there wasn’t much of a view on account of those “dramatic cloud formations.”

On clear days though, tourists exclaim over the view.

“Indeed, Mildred. Through these field glasses I can just make out the Holsteins grazing along the Connecticut River.”

“I believe it is. If I squint, I can see a lobster boat bobbing about in Casco Bay.”

“Canada, my dear. The lumberjacks are sporting red plaid this season.”

“Why Harry, I can practically smell the Boston baked beans.”

“No dear, that’s smoke from the wood-fired boiler.”

Later coal replaced the wood, making the smoke even more beany. These days most of the engines run on diesel. This year marks the Cog’s 150th anniversary.

Recently at a diner not far from the base of the big mountain, a couple of tuckered-out fellas from away, dressed head to toe in Gore-Tex, dragging their mud-splattered backpacks behind them, bragged that they’d just hiked Mt. Washington.

Says the local at the counter, “Didn’t anybody tell you there’s a road?” Says the other local, “And a train.”