The works of New Hampshire authors are the perfect present

The holidays bring a sleighful of diverse books that are perfect for gift giving. Explore the art of language; discover a forgotten Civil War heroine; embark on an emotional father/son trip; and as the snow falls, curl up with three haunting books, perfect for the fireside season.

Battle of Silicon Valley at Daybreak
by Alexandria Peary

Alexandria Peary, New Hampshire’s Poet Laureate, explores myriad topics, including the true meaning of language, in her new volume of poetry. Is it rhymes and stanzas? Sentences woven together? Or something else? If language is at the heart of how we express ourselves, what happens when language itself breaks down? Peary’s work portrays an America whose culture is on the verge of collapse, its ideals fading. She tackles a mad swirl of topics, such as concrete landfills, federal judges, sexism, hate crimes, and cyberattacks. This dystopian view is juxtaposed against an examination of how our written communication is continuously being influenced (or undermined) by technology. How is our daily intake of random and disorganized images, ads, memes, texts and commercials wearing down our ability to truly express ourselves in words? We take in a constant diet of mass-produced content and ideas. Under such a barrage, Peary asks, “How does the immense bulk of writing stay upright?” The reader may not be sure what “upright” refers to, but perhaps it is the idea of true, beautiful language for language’s sake. Is there still a place for real communication, writer to reader, rather than words too often driven by underlying code?

ABOUT THE AUTHOR: Alexandria Peary was named New Hampshire’s Poet Laureate in 2020. Peary was born in Dover, New Hampshire, to an American father and a German mother. She received a BA from Colby College, MFAs from the Iowa Writers’ Workshop and the University of Massachusetts Amherst, and a PhD from the University of New Hampshire. Peary is the author of several volumes of poetry including “The Water Draft,” “Control Bird Alt Delete” (winner of the Iowa Poetry Prize), and “Lid to the Shadow,” recipient of the Slope Editions Book Prize.

Peary is also the author of “Prolific Moment: Theory and Practice of Mindfulness for Writing.” She has conducted a web series for the National Council of Teachers of English on mindful writing, and hosted a TEDx talk, “How Mindfulness Can Transform the Way You Think About Writing.”

The Book of Maps
by Ernest Thompson 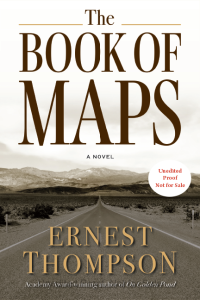 Acclaimed writer Ernest Thompson has crafted a powerful novel with “The Book of Maps.” Thompson, who endeared himself to Granite Staters with “On Golden Pond,” takes the reader on a cross-country sojourn as a father and his 10-year-old son journey from Los Angeles to New Hampshire. Brendan has not been a good father, but with this trip he hopes to become a better one — at least in his son’s eyes. The duo experiences a series of adventures, blunders, and even terrifying crises brought about by Brendan’s constant need to prove himself. There is also a taut emotional undercurrent because Brendan carries a secret that he must ultimately share with his son, even though he knows it will shatter his world. At its heart, “The Book of Maps” is a story of redemption. Can a father heal his relationship with his son, and convince himself that he is worthy of love?

Thompson based “The Book of Maps” on his own 2002 cross-country journey with his son, August, who was 10 at the time. While they made the same stops and had some adventures (without the emotional angst), they did not endure the same perils as his characters, except for one river crossing where the unexpected depth nearly caused a disastrous outcome. Thompson, who wrote so eloquently about parent/child dynamics in “On Golden Pond,” wanted to explore the father/son bond and especially that bond when the son was age 10. “I find that age to be a touchstone in many ways, as it’s both the ending of things and the beginning of things,” he says. “At 10, you are still a child, but you are also changing and growing up. It’s a turning point.” In his varied career, Thompson has written about many topics but finds family “endlessly fascinating. Family is life. There is always a story there.”

ABOUT THE AUTHOR: Ernest Thompson has won an Oscar, two Golden Globes, a Writers Guild Award and a Broadway Drama Guild Award for Best Play. His work has been nominated for a Tony, an Emmy and a British Academy Award, and his more than 35 plays have been seen in theaters around the world. “On Golden Pond” alone has been translated into 30 languages and shown in more than 40 countries. Thompson’s films include not only “On Golden Pond” but also “The West Side Waltz,” “Sweet Hearts Dance,” “The Lies Boys Tell,” and “Out of Time,” to name a few. They have featured notable actors such as Katherine Hepburn, Henry Fonda, Kirk Douglas, Shirley MacLaine and Liza Minnelli, among others. An actor himself, Thompson has appeared on Broadway, at the Ahmanson Theatre in Los Angeles, in several soap operas and television shows, and in feature films, including “Star 80,” directed by Bob Fosse. A prolific songwriter, Thompson has collaborated with Carly Simon and with award-winning Cape Breton fiddler Natalie McMaster on his song “On Golden Pond.” His song “Live Free or Die” is regularly performed by music and film star John Davidson. Thompson will soon direct the film sequel “Home on Golden Pond.” A second novel is scheduled to debut in 2023.

No Place for a Woman: Harriet Dame’s Civil War
by Mike Pride 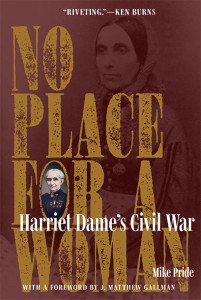 Johnny Reb and Billy Yank weren’t the only ones who went off to America’s Civil War; thousands of women served as well, most as nurses but some as soldiers. Among those in the nursing ranks was New Hampshire’s own Harriet Dame, who served with the 2nd New Hampshire Regiment during its entire time in the field. Dame hailed from Concord, and Mike Pride discovered her story when he moved there in 1978. He felt compelled to know more, and during the COVID lockdown of 2020 “researched and wrote furiously.” His work led him to Gettysburg and the site of the Second Battle of Bull Run in Virginia, locations where Dame served in field hospitals. Pride’s book reveals a woman of fierce passion who was loyal and protective of the soldiers in her care and ahead of her time in pushing for the rights of veterans and their families. In a story that filmmaker Ken Burns calls “riveting,” Pride brings to life a compassionate, brave and tireless woman, and fulfills his personal mission to “restore Harriet Dame to her rightful place in history and give back to New Hampshire one of its mostly forgotten Civil War heroes.”

ABOUT THE AUTHOR: Mike Pride of Bow, New Hampshire, is a history buff who has written three previous books on the Civil War and co-authored a World War II memoir, among others. He holds a bachelor’s degree in American Studies from the University of South Florida and is an Army veteran, having served as a Russian linguist. Pride began his writing career as a newspaper journalist, eventually becoming the editor of the Concord Monitor. During his long tenure, he received the National Press Foundation’s Editor of the Year award in 1987 for his coverage of the death of New Hampshire teacher/astronaut Christa McAuliffe during the space shuttle Challenger disaster. Pride was also awarded three Hoover Institution Media Fellowships at Stanford University and later was a Scholar-in-Residence at Gettysburg College. He is a four-time Pulitzer Prize juror.

The Tree Stand
by Jay Atkinson 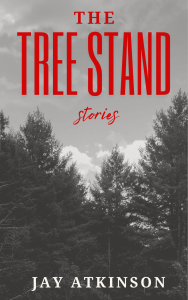 We enjoy stories to share in the lives of others, and the short-story format is still the most efficient delivery system for readers. Author Jay Atkinson wastes no words as he traces the struggles and motivations of his characters in the tales contained in “The Tree Stand.” One is quickly spellbound by the rush of vision as others’ worlds come to life with poignant, sometimes cruel, realism. Such clarity and economy come most naturally from a writer who spends much of his time challenging nature as an athlete and adventurer, where every item and element must prove vital or else be left behind. In Jack Kerouac’s “‘Belief and Technique for Modern Prose,” the great Beat author laid out his personal rules for writing with 30 brief, Zen-like phrases. The last one reads: “Writer-Director of Earthly movies Sponsored & Angeled in Heaven.” In Atkinson’s vignettes, it’s such holy entanglement in the affairs of his Earth-bound characters that provides the redemptive perspectives of their mortal selves, projected on the immortal screen of your own imagination.

ABOUT THE AUTHOR: Jay Atkinson, dubbed “the bard of New England toughness” by Men’s Health magazine, is a prolific and acclaimed writer. New Hampshire Magazine’s outdoor adventure series “The Explorers” (reappearing in our December 2022 issue) was created by him and photographer Joe Klementovich.