After school ski programs and vacation camps add to the coffers. They have their own ski teams and adult race leagues, and host high school and other races. Many have pursuits like cross-country skiing, snowshoeing, ice skating and tubing.

Head to these smaller, welcoming hills and discover grassroots vibes, not glitz. Steeped in history and tradition, they feed skiing’s soul. Called feeder areas, they’re community-minded hills where chances are you’ll bump into someone you know. Trails lead back to the one base lodge.

High speed detachable quads? Not exactly. Fixed grips, conveyor lifts and even throwback lifts like rope tows and t-bars are found. There are also struggles. Some have been revived several times over their lives. 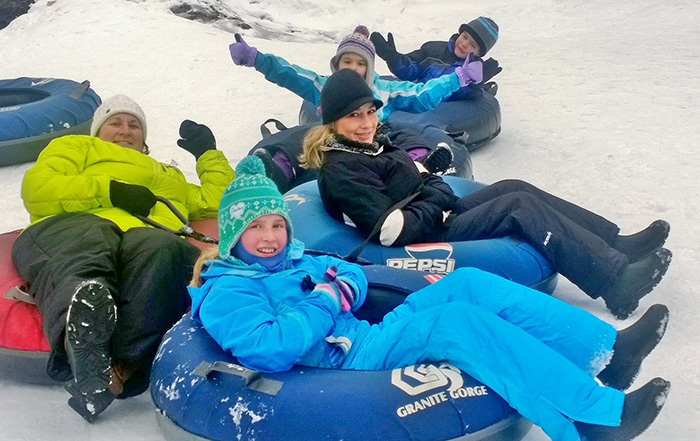 In the shadows of Mount Monadnock and five miles east of downtown Keene in southwest New Hampshire, Granite Gorge takes affordable skiing to heart. Last season, the north-facing family-owned hill slashed lift tickets across the board with lift tickets like an adult full-day cut to $33 from $49.

“We’re basically a two for one price when compared to our competitors,” said Baybutt.

The hill is the rebirth of the old Pinnacle Peak Ski Area, selected by the state as a “gateway” ski area in the late 1950s to compete with hills in Vermont and New York. Baybutt’s family grew up skiing there and wanted to see it pulsing again.

“The terrain is beautiful with trails cut back in the late ’50s, early ’60s,” Baybutt said. “There is a variety of trails with character.”

There is also cross-country skiing, snowshoeing, night skiing and tubing.

Given the ski industry’s tough competition, Granite Gorge and like-minded mom-and-pop operations are mimicking the multi-resort passes offered by larger resorts with its own — the Freedom Pass. Granite Gorge was one of the first of the five members when the pass started about a half dozen years ago. Now membership is in the teens. Buy a season pass at any of the participating mountains and get three free tickets to all the other Freedom Pass mountains.

“We’re the little guys, the feeders, sticking together,” Baybutt said. 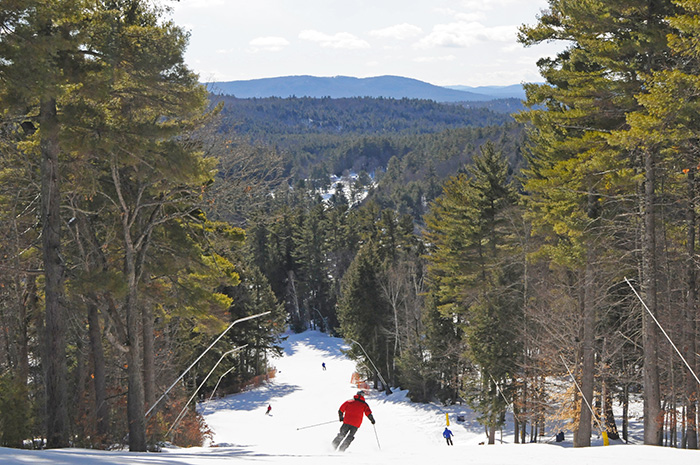 King Pine is an example of a long-standing family hospitality enterprise dating back to the late 1800s when patriarch Milt Hoyt founded Purity Spring Resort. The Hoyt family has been providing family-centered recreational activities for more than 100 years.

Skiing there dates back to 1938 when Hoyt installed a rope tow to attract small groups to the new sport of skiing — and to get them to stay at his inn. In 1939, he started the Ski & Snowboard Camp for boys and girls, known as the longest-running ski camp in the country which still runs twice a year.

The 17-trail destination, in East Madison and not far from North Conway, is customarily 100 percent open from Christmas week on and has a wide range of activities — skiing, riding, tubing, ice skating, cross-country and snowshoeing — all accessible with one lift ticket.

With glades and steeps, King Pine’s 350 feet of vertical offers a great deal.

“Parents feel comfortable letting their kids go off alone with friends to explore our trails when they are here day or night skiing,” said Marketing Director Thomas Prindle.

Many who’ve learned to ski there come back years later.

“What I have found at King Pine is that you have generations of families skiing and riding here, kids that grew up skiing at King Pine who may have moved on to larger ski areas here in the east or even out west, now a couple decades later, have returned to King Pine with their own children because it’s where they learned to ski,” he said. 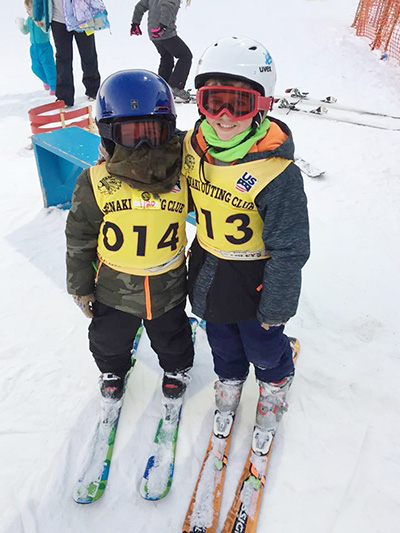 Wolfeboro’s Abenaki Ski Area may be small with seven trails and a rope tow, but the town-owned hill carries the label of being the oldest small ski area in the country.

The first trails were cut in 1936. Four years later, a rope tow and lodge with stone fireplace were added. Like many feeder hills, it’s had its ups and downs.

The town eventually took over to manage the Lakes Region area and in 2005 the Friends of Abenaki re-suscitated the hill with new grooming equipment and portable snowmaking.

“We really wouldn’t be where we are today without the support of Friends of Abenaki,” said Wolfeboro Parks and Recreation Director Christine Collins. “They are the group that helped keep this hill going.”

As do resident families and visitors with small children. The hill bubbles with events like fun ski races, ski a-thon, triathlon and air contests. When the hill’s closed to the public Monday and Tuesday, a few ski teams practice.

Then there’s the price: $8 for locals (Wolfeboro, Tuftonboro and Brookfield) and $20 for others.

“It is a smaller hill where most people know your name,” Collins said. “It’s a great place to start learning. Not so many people that you feel lost in the shuffle.”

Another element to consider: the excellent location of many of these feeder hills. McIntyre Ski Area in Manchester bills itself as southern New Hampshire’s playground. The urban ski area has an easy draw from the Queen City and its suburbs. The chairlift first started spinning in 1971 with the ski school open-ing some seven years later turning Greater Manchester area tykes into skiers and snowboarders. A pair of double lifts and conveyer lifts serve the nine trails lit at night. The eight-lane tubing hill provides thrills with little skills. 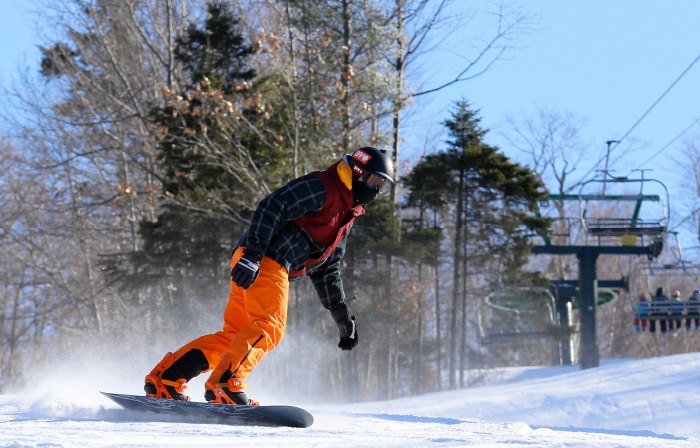 Dartmouth Skiway in Lyme Center is a rare find, as one of a scattering of ski areas nationwide owned by a college or university. That Dartmouth College connection in nearby Hanover means the 30-trail, four-lift hill is home to the Big Green. It’s hosted NCAA championships and winter carnivals that have seen a slew of racers later compete in Olympic and World Cup competitions. Plus, many people linked to the racing program and Skiway have graduated to ski industry careers.

“Big Green alpine teams are here often during the season and that is our main focus, getting them on snow,” said general manager Doug Holler.

The Skiway, which had a 102-day season in 2017-18, is also an integral part of after-school and community-focused ski programs. Dartmouth students even teach about 250 local students to ski there each year, and also comprise about 95 percent of ski patrol.

Holler says the area experiences lighter crowds — a good thing for those who take to the hill.

“Fewer folks mean that conditions hold a bit better, not getting skied off so quickly,” he said.

Though the Skiway attracts a large number of people from the Upper Valley and college (plus their fami-lies and friends), they see other visitors during vacation periods.

“We also get a number of visitors from other areas that did not like the crowds there, so they tried us and were very happy they did,” he said.

Near Plymouth, Tenney Mountain is a reincarnated ski area that’s seen several ownerships changes and shutdowns during its more than a half century lifespan.
Last season, the hill opened briefly in March for its first full weekend after being closed for eight years. 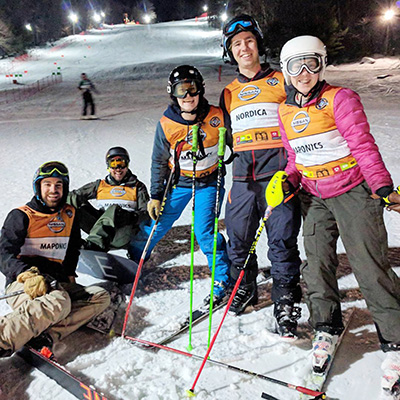 Whaleback in Enfield, just off Interstate- 89, has bounced back several times over the years and re-opened a few years ago as a nonprofit organization called the Upper Valley Snow Sports Foundation.

“Without the community, Whaleback wouldn’t’ exist,” General Manager Adam Kaufman said. “Whaleback is a great way to get people outside in the winter, after school, after work, in the evenings and on weekends.”

The hill opens in the afternoon and has a Thursday night adult race series.

“People are looking for that low-priced alternative, especially when they want to learn to ski and snowboard,” Kaufman said. You don’t really need those high speed detachable quads. It is less intimidating to learn the sport.”

There are similarities to the larger resorts — as with any ski resort, feeder hills always have Mother Nature to battle.

“Like every mountain, the weather is our biggest challenge,” said Kaufman.