This odd bridge now stands silent, but once it warned neighbors when company was coming 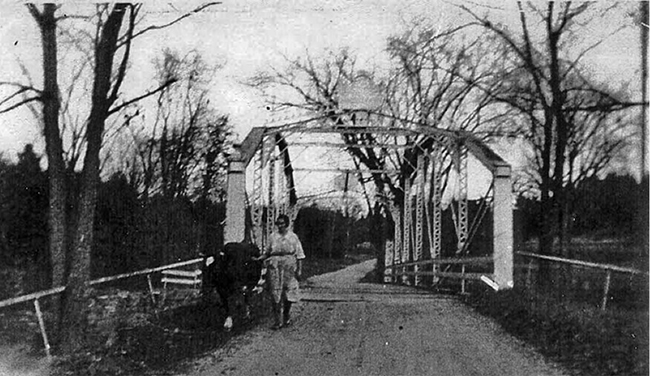 In the 1950s, Bessie Coombs crossed Thunder Bridge while bringing her cow to and from the pasture. Photo courtesy of the Chichester Historical Society

Thunder Bridge is silent now and no longer rumbles with the roll of distant thunder. The town decided to close the aging bridge to vehicular traffic in 1978 and to construct a new bridge downstream. They left the old bridge standing and it still spans the Suncook River, providing pedestrian access into Epsom from Chichester.

More properly, the old bridge should be called the “Depot Road Bridge” or “Pineground Bridge,” but the locals affectionately call it “Thunder Bridge” because of the noise it made whenever a car drove across it. When the wind was right, the noise could be heard several miles away and strangers mistook it for distant thunder, earning the bridge the nickname.

The bridge is a wrought iron truss structure with a wooden plank deck travel surface. The planks were loosely laid upon, but not fastened to, the wrought iron I-beams running the length of the bridge. The thunder noise was created by the bounce and flex of the wooden deck planks banging against the iron beams whenever a vehicle drove over them.

Residents in the area said they knew when company was coming because they could hear them rattling across the bridge. Some drivers were known to deliberately accelerate while crossing the bridge to accentuate the rumbling thunder noise.

Thunder Bridge is a lenticular parabolic truss bridge built by the Berlin Iron Bridge Company of East Berlin, Connecticut, in 1887. Lenticular parabolic truss bridges are easily recognizable by the two chords that form a unique ‘cat’s-eye’ shape. Both the top and bottom chords are curved and function to transfer weight loads from the deck of the bridge out to the ends, which rest on solid granite block foundation abutments. 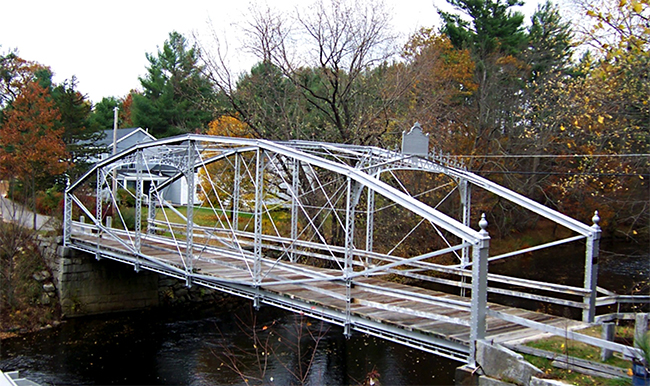 A modern day view of the bridge. Photo courtesy of the Chichester Historical Society

The bridge was chosen by the town from a catalog of bridge styles presented by a traveling salesman who then placed the order. The bridge components were manufactured in a factory in Connecticut and shipped via train to the railroad depot near the site. Horse and ox teams then moved these heavy iron components from the railroad depot to the river crossing where they were assembled. The purchase price didn’t include construction costs for the quarried granite stone abutments or roadbed grading. Local labor was hired to complete that earthwork.

Walter S. Langmaid kept a journal in 1887 and recorded the work that he did each day hauling fill and rock with his oxen and splitting granite for the abutments. He also very casually mentions what must have been a challenging and cold experience on a rainy December day:

Very rainy forenoon. They intended to commence on the bridge today. Arthur, Noah & John Mera came down as far as here and stopped so we put on water and killed our pig and they helped us. In the afternoon Noah & I went down to the depot and unloaded a car load of stone & drawed them down to the bridge. They are going to work on the iron bridge tomorrow.

Cold pleasant day. I went to Concord today for the car load of oats. I took $370 dollars out of the bank. I got me a pair of leather boots. Got three bags of cotton meal, went over with the colt. Julia went up to the singing, I went up & met her. I cut up the pig. Father worked down to the bridge. They commenced to build the iron bridge today. Had 8 hand [men working on it].

Cloudy day, rained.  In the afternoon I worked down to the bridge with the oxen.  We took down the old bridge today and & I hauled it out of the river with the oxen.  I had to drive them across the river.  Julia & mother rode down to see the bridge.

Thunder Bridge has seen a lot of people come and go in the almost 100 years that it provided service for travelers. It was the access route to Ordway’s mill when the water powered combination sawmill, shingle mill, and grist mill was operating. The mill building washed out in 1897 when flood waters eroded away the foundation of the building. The mill dam was later destroyed during the hurricane of 1938. Iron gear remnants of the old mill were found in the mud below the river and are on display at Thunder Bridge today.

When the Blueberry Express railroad ran through Chichester, mail came in on the trains twice a day where it was picked up at the depot and delivered to the post office via Thunder Bridge. The bridge also provided access to the railroad depot for solders shipping off to WWI and WWII. Returning soldiers must have been delighted to hear the thunder of the bridge once again when coming home. 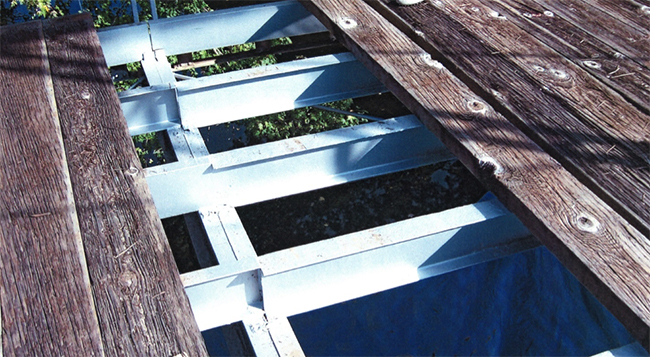 In the early 1950s Bessie Coombs lived in a house on the west bank of the Suncook River. Bessie kept a milk cow in her barn for the family, but the cow’s pasture was on the opposite side of the Suncook, so every morning Bessie would lead her cow across Thunder Bridge and put it into the pasture on the east side. In the evening she’d bring the cow back across the bridge and return it to the barn for the night.

In 1978, with deteriorating stringers and floor beams, Thunder Bridge was closed to vehicles, but remains open for pedestrians, bicycles, and snowmobiles. It continues to provide fishermen with a handy spot to fish from and is a quiet place to visit on summer days.

Thunder Bridge is no longer on any main road so you won’t find it unless you go looking for it. If you do decide to go find it, plan your visit to coincide with the annual picnic that the local historical society hosts on the bridge every year. (It’s July 9 this year.) When the picnic turnout is good, Thunder Bridge is silent no more.