Perley Swett lived alone but was not lonely 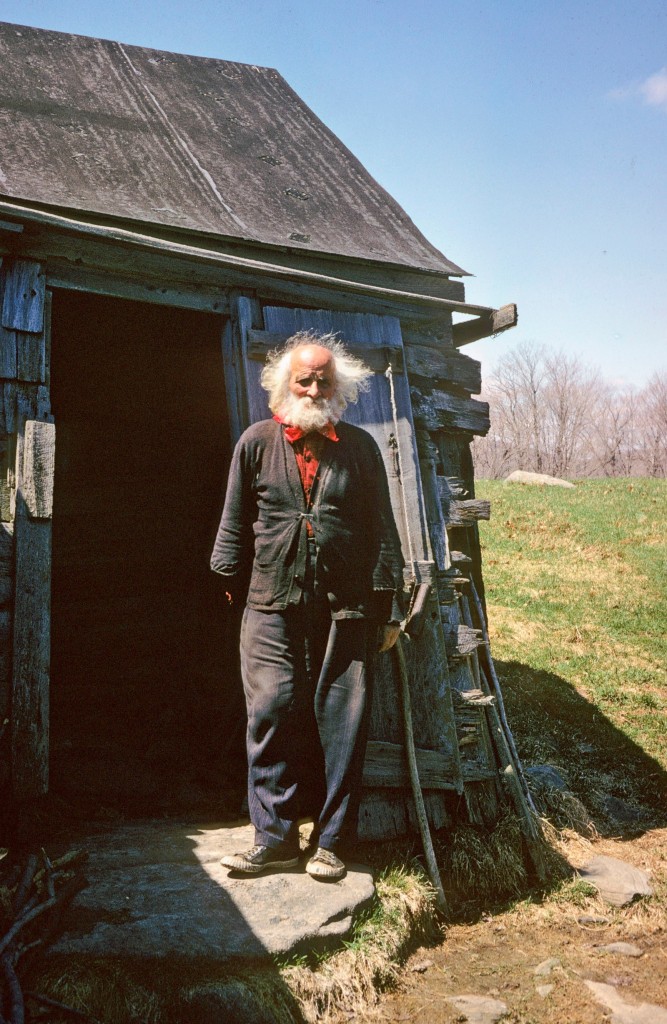 In 1962, at the age of 75, Perley Swett, the Taylor Pond Hermit, dug his own grave. The hermit selected his final resting place beside a large boulder that would serve as his headstone. Using roofing tar, he painted “Taylor Pond Hermit” and the date of his of birth, “2-6-1888,” onto a board that he affixed to the boulder headstone. Including the date of his death posed a problem as he couldn’t predict the exact date of his inevitable fate, but Perley solved this dilemma by picking a date he liked. He chose “11-26-2013” and painted it onto the board, commenting that he would die on that date, if not before. Perley must have been feeling optimistic when he selected November 26, 2013, as that would have made him 125 years old.

Satisfied with the physical arrangements of his final resting place, the hermit then put his wishes into writing to fend off any legal challenge to being buried in this self-dug grave. In a handwritten letter, Perley “commanded” that he be buried at the farm where he had spent most of his life, alone for more than 25 years of it.

Perley Swett, hermit of Taylor Pond, not only left behind burial instructions, but also many handwritten “last will and testaments” and other end-of-life instructions for the disposal of his property. The hermit wrote poetry and kept a daily journal, and, being part packrat, he saved all his quasi-legal documents, diaries, poetry, letters, newspaper clippings and other paperwork. These papers provide a peek into the life of the Taylor Pond Hermit, and allow us to piece together why he came to be living alone in the unpopulated woods where Stoddard, Sullivan and Munsonville collide.

To begin with, Perley was born there and never really left. Perley’s grandfather bought the rocky hilltop farm in 1864, and he froze to death on it in 1876 while walking out for food supplies. The body was not found until the following spring. The farm passed to Perley’s mother, and Perley was born in the family home in 1888.

In the book “Perley: The True Story of a New Hampshire Hermit” (by Sheila Swett Thompson, the hermit’s granddaughter)Perley’s father, Daniel, was described as “shiffless,” and when he died in 1922, as the coffin was carried to the grave, it was suggested “that was the fastest ol’ Dan ever moved.” Perley had three older siblings and three younger siblings, but they all moved off the ancestral farm, leaving only Perley and his mother. As Perley said, “How easy to become a famous hermit just by not moving or dying.”

The road that ran past the family farm had been a stagecoach route before the Civil War when farms in the area prospered. A school district once existed there before the advancement of railroad routes, free land out west, the Depression and two world wars reshuffled the population away from remote New Hampshire farms. As the town changed and the neighbors moved away, the town discontinued maintaining and snowplowing the road. Perley’s home at the end of the road became more isolated and inaccessible during the winter and spring mud season.

In 1911, Perley married Helen Whitney, and they raised six children on the farm. Unfortunately, Perley and Helen’s marriage had problems from the beginning. Perhaps Helen had been unfaithful, perhaps not, but a divorce ended their marriage in 1933. The divorce decreed that Helen and the children would remain on the farm and receive weekly child support payments from Perley. Perley felt this was unfair and protested to anyone who would listen. He felt he was being wrongly punished by the court as his wife had been unfaithful, not him. Perley also felt that since his wife had been given his ancestral farm with three teenage sons to work it, he had no way to earn the money he had been ordered to pay her. He stubbornly refused to comply with the court order.

The courts gave Perley the option of deeding his ex-wife the land, making payment to buy her out or going to jail. Believing he had been wronged and standing on principle, Perley opted for jail. The court sentenced him to the Cheshire County Farm in Westmoreland until he made the payments or deeded her the land. While in jail, Perley wasn’t exactly a model prisoner. He wrote letters to authorities complaining about unfair treatment and circulated petitions among the prisoners demanding improved conditions. He also wrote poetry to the superintendent’s wife. None of these endeavors endeared Perley with the superintendent, who responded by moving him into solitary confinement. He adapted to solitary and continued his protests and poetry, earning yet more time in solitary. 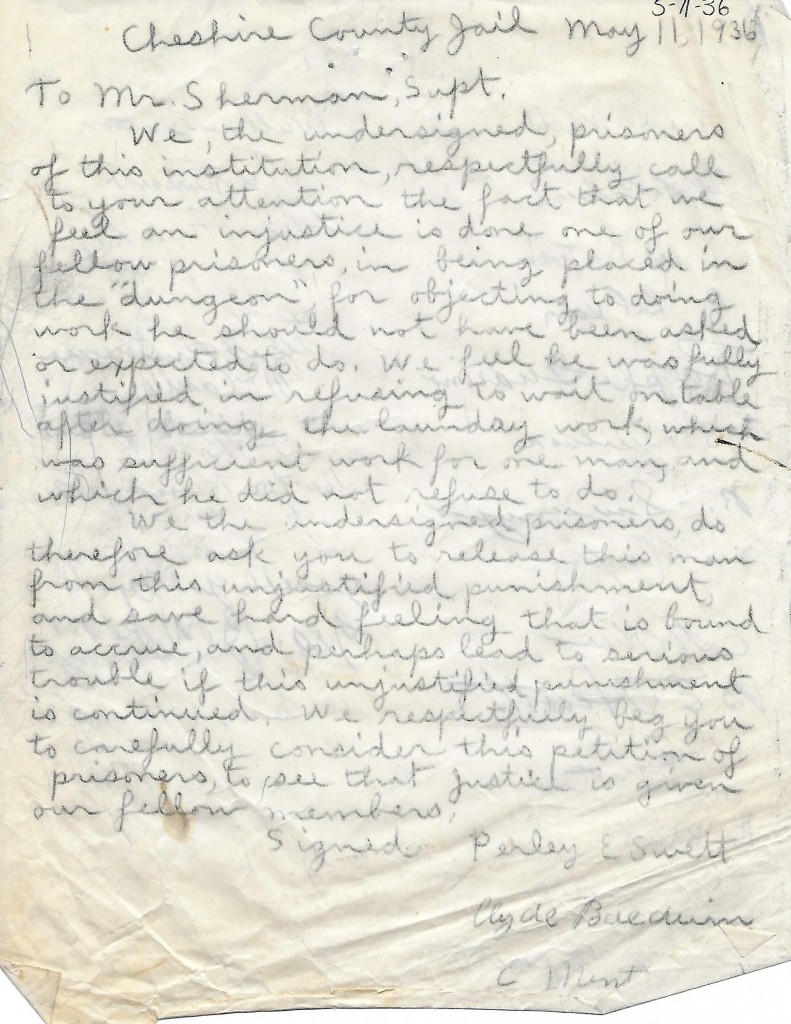 Though Perley could have secured his release at any time by complying with the court, he refused to leave, demanding instead that the order be revised, and he receive an apology. This stalemate resulted in Perley serving three years in the county lockup, and he likely would have served longer, but his ex-wife died and therefore could no longer receive either money or the farm.

While the score may have been settled with his ex, Perley was still obligated to make the court-ordered payment to her estate — the heirs of her estate being Helen and his six children. Perley had had little fatherly interaction with the children during the three years he was in jail, and the oldest sibling, representing the interests of the six children, began legal proceedings to force Perley to comply with the court order and give them Helen’s half of the estate. Eventually, Perley conceded and conveyed 300 acres to his six children as their inheritance from their mother. The lawsuit was now settled, but his relationship with his children was strained.

When released from Westmoreland, Perley moved back to his family homestead to care for his 85-year-old mother. When she died in 1944, Perley could have moved somewhere with electricity and indoor plumbing, but alienated from family and perhaps adjusted to solitary living, he began a reclusive existence, gardening, fishing, cutting firewood and caring for his herd of goats. He accepted the life of a hermit, frequently going several months without seeing anyone. Hunters, hikers and townspeople willing to risk losing mufflers or getting mired in the mud came to check on him periodically, bringing groceries and exchanging mail.

With the passing of time, his relationships improved with some of his children, and they visited occasionally. Perley also became a bit of a celebrity in 1953 when Yankee Magazine published an article about him, which brought curious visitors to his door. Some of these visitors became pen pals or fast friends, who made return trips to bring supplies or just to check in on him. After decades of hermit life, Perley now enjoyed friends he cared about and who genuinely cared about him. Perhaps finding redemption, Perley gave money and gifts generously to these friends and down-the-road-apiece neighbors who looked after him in his final years. The Taylor Pond Hermit died in 1973 at the age of 85, somewhat short of his 125-year aspiration. And yes, he was buried in the grave he dug for himself 10 years earlier.

A thank-you to Sheila Swett Thompson for her assistance in preparing this article. Sheila is the granddaughter of the Taylor Pond Hermit, and the author of “Perley: The True Story of a New Hampshire Hermit.”