The Mysterious Island Between New Hampshire and Vermont

A two-state saga of boundaries and tragedy 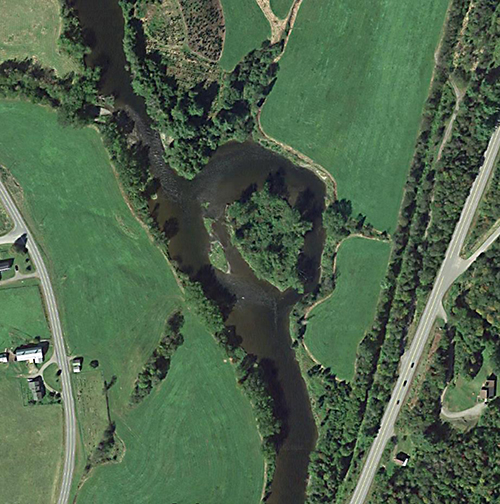 In 1933, Alice Daley owned an insignificant island in the middle of the Connecticut River between Columbia, New Hampshire, and Lemington, Vermont.

Today the island still remains mostly unchanged, and is located just upriver from the Columbia covered bridge. If you look for it using any online aerial mapping program, you’ll likely see the island depicted as being in New Hampshire. Only it isn’t. Alice Daley’s island is in Vermont, and it creates a pimply protrusion into the state boundary line that leaves curious observers wondering why that’s so.

Starting way back in the Colonial era, Vermont and New Hampshire disputed their common boundary along the Connecticut River. While it was accepted that the Connecticut River was the state boundary, Vermont claimed that the centerline of the river was the boundary, whereas New Hampshire claimed it to be the riverbank on the west side, thereby putting the entire river in New Hampshire. In the 1800s and early 1900s, waterpower drove both industry and commerce, so ownership of the river meant control of the river’s wealth in the days of log drives, toll bridges, ferries, and factory waterpower when multiple dams straddled the river from Hinsdale to Pittsburg. Gravel and minerals excavated from the riverbed were also in contention, so after years of squabbling, Vermont sued New Hampshire.

In the 1933 case State of Vermont v. State of New Hampshire, the US Supreme Court settled the boundary dispute by splitting the difference, ruling that the state border lay along the natural low-water mark on the western side of the Connecticut River, giving New Hampshire most, but not all of the river. The low-water mark was defined as the normal line that the river recedes to at its lowest stage, unaffected by extreme droughts. 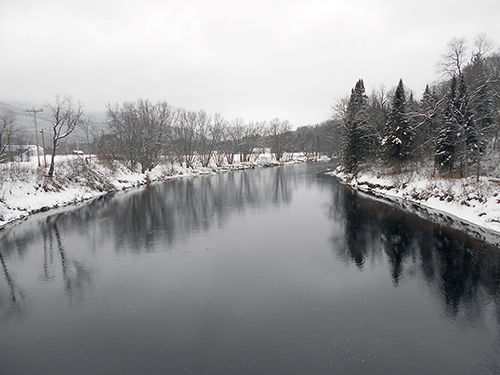 An ice view upriver on the Connecticut River from the Columbia covered bridge. Photo by Marshall Hudson

The Supreme Court ordered that appropriate boundary markers be placed along the river and appointed Samuel S. Gannett as special commissioner to determine and locate markers at appropriate points along the boundary. Gannett dispatched a team of surveyors to determine the location of the low-water level and set monuments at these troublesome places. In 1936, they finished the surveying and submitted a report that was accepted by the court, thus finalizing the ownership of the river at theses disputed locations.

Alice Daley’s Island was one of these troublesome locations. Located upstream from a bridge abutment where the river split in two around the island, it wasn’t clear if it was in New Hampshire or Vermont. The 1936 surveyors mapped the main channel much the same as it appears today, depicting the main channel on the west side of the island, thus placing the island in New Hampshire. But then the surveyors indicated on their map that the state line was on the east side of the island. This put Alice Daley’s Island inexplicably in Vermont.

Perhaps the surveyors were influenced by the testimony of Mr. Edward Daley, a local Vermont farmer and owner of a different island downriver. At a 1928 hearing, Daley described his ownership of Edward Daley’s Island, located a few miles south of Alice Daley’s Island. Daley stated that he considered his island to be an extension of his farm on the Vermont mainland that he had owned since 1910 as illustrated by the following transcript from the trial:

[Lawyer]: Did you ever pay any taxes in New Hampshire on that island?

[Ed Daley]: No, sir, no, sir, never did. I understand that island was cut off the farm, a jam of ice got in down below and turned the water over the meadow and cut a little channel through it and it was taken off the farm.

[Lawyer]: How long ago did that happen?

[Ed Daley]: That is something I can’t tell, it was before I got it.

Perhaps the river used to swing wide to the east and loop back, and straightened itself out in an ice jam avulsion event. The surveyors looking to map the “natural” course of the river may have taken Daley’s testimony into account and adjusted for the ice jam event, but there are two obvious problems with this theory. The first is that the testimony was about Edward Daley’s Island and not Alice Daley’s Island a few miles upriver. The second problem is that the surveyors concluded Edward Daley’s Island to be in New Hampshire regardless of his ice jam testimony. The reason why Alice Dailey’s Island isn’t in New Hampshire will forever remain a mystery, but the acceptance by the US Supreme Court of the report makes the decision final; Alice Daley’s island is in Vermont.

Scrutiny of the 1936 surveyor’s Diagram No. 62 depicts a cemetery across the road from the Daley farmhouse. The cemetery remains today, and in it not only can you find the final resting place of Alice Daley, but also another old headstone that reveals a tragedy that occurred at Daley’s Island. The monument reads:

To the memory of
CLARRISSA SIMMS
Wife of the late Dr. Elihu Baxter of Portland Maine who was drowned while crossing the Conn River
April 1, 1806
Age 18

“Clarrissa Simms in 1806, drowned on her wedding day while fording the river near the Daley meadow … her tragedy written on her marker,” according to “The History of Lemington.” The marker, the town history, and the legend don’t quite align as Clarrissa Simms wouldn’t have been Dr. Baxter’s wife if she drowned before the ceremony on her wedding day. If she drowned after the ceremony, she traditionally would have been Clarrissa Baxter, not Simms, and curiously, where was the groom while she was fording the river after their wedding? I’m also wondering why she forded the river instead of using the bridge downriver.

Other sources suggest Clarrissa Simms married Dr. Elihu Baxter in February of 1806, so while she would have been very recently married on April 1, 1806, it wouldn’t have been her wedding day. It also appears that the bridge wasn’t constructed until 1820, so in April of 1806, Clarrissa might have been attempting to cross over the river on the spring ice.

The groom, Dr. Elihu Baxter, remarried in August of 1807 and moved to Portland, Maine, where he died in 1863. Alice Daley died in 1948 and her island now belongs to her grandson.

The State of Vermont, arguably the loser in the initial lawsuit, concluded that since New Hampshire owned the river, it also owned all the bridges and therefore was responsible for all bridge maintenance and upkeep costs. Perhaps they lost the battle but won the war?