The Meetinghouse at Bloody Point

Stone steps to nowhere tell a story of long ago 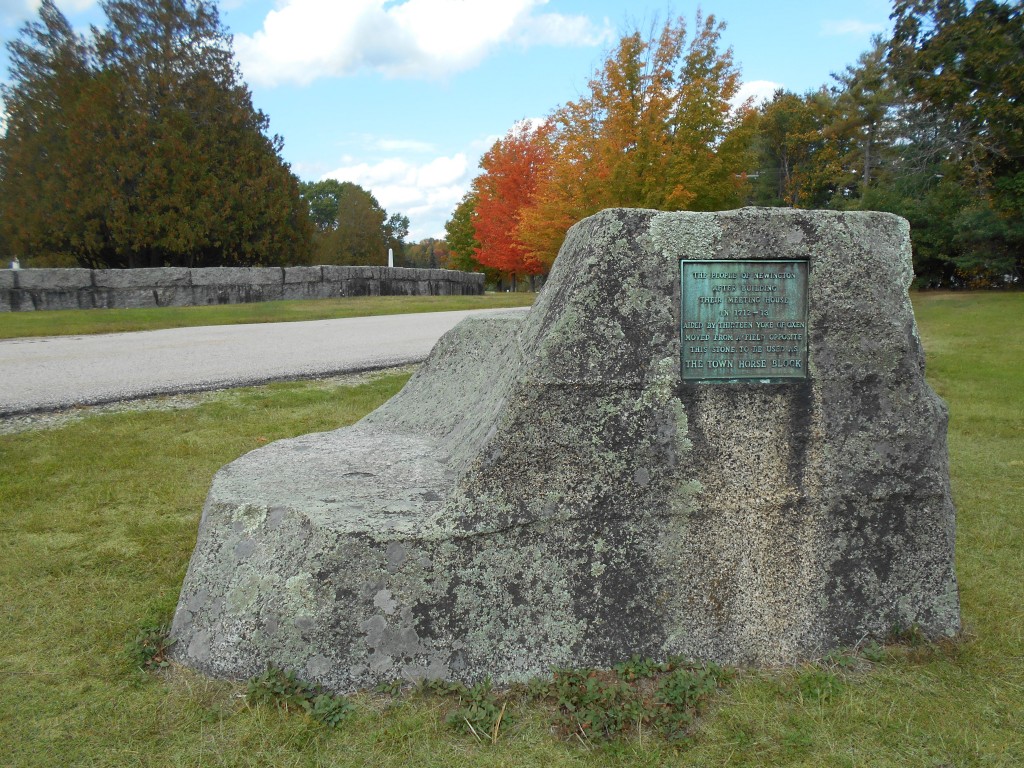 Once upon a time, this rock outside the Newington meetinghouse helped women gracefully hop astride their horses. Photo by Marshall Hudson

The oddly shaped boulder in front of the Newington Meetinghouse caught my attention. Thirteen yoke of oxen had labored to drag it there in the early 1700s. Someone had flattened off the top and chiseled steps into it. Why? I tried the steps. They still work. I’m wondering what this rock has seen come and go over the last three centuries.

This old meetinghouse predates the Town of Newington having been erected when the area was known as “Bloody Point,” which was claimed by both Dover and Portsmouth. Supposedly, around 1631, a representative of the Swampscot land grant (Dover) and a representative of the Piscataqua land grant (Portsmouth) met to discuss resolution of the conflicting grants. The negotiations did not go well, tempers flared, and swords were drawn. No blood was spilled, but the disputed lands acquired the name “Bloody Point.”

Surrounded on three sides by the Piscataqua River and the Great Bay estuary, early residents of Bloody Point found it difficult to attend town meeting or church service in either Dover or Portsmouth when the tide was running against them. Tired of boundary disputes and rowing against the tides, Bloody Point residents decided to establish a township, or parish, independent from both Portsmouth and Dover. The granting of a separate parish with town privileges in the early 1700s required the election of town officers, the construction of a village meetinghouse, and the establishment of a church with a settled minster. There was no requirement for separation of church and state at that time, so a meetinghouse would serve the dual purpose of being both a place for feisty town meetings and solemn worship.

Construction of the Bloody Point Meetinghouse began in 1712, and the first meeting was held in it on January 21, 1713, even though the building was far from completed. There were no seats, and the windows were only holes in the walls. The cold but hardy participants gathered to consider the calling of a minister, the next step in the process of becoming a separate township.  On August 6, 1713, a meeting was held to organize the parish. The necessary officers were elected, and the parish was set off. The name “Newington” was chosen after an English village that provided a bell for the new meetinghouse.

By 1714, the building was completed enough to hold a meeting for the sale of “pues.”  “… It was voted that inhabitants who would have a pue should pay twelve pounds for the largest and ten pounds for the smaller ones …” The meetinghouse was not heated, so box pews with doors were constructed, minimizing drafts to keep occupants warmer. Foot warmers filled with hot coals or heated stones helped to keep huddling families warmer inside their enclosed pew box.

The Rev. Joseph Adams was the first settled minister in the new meetinghouse, and he preached there for 68 years. Adams graduated from Harvard College in 1710, and began his ministry service at this meetinghouse in 1715. Rev. Adams was the uncle to John Adams, second president of the United States, and great uncle of John Quincy Adams, the sixth president. 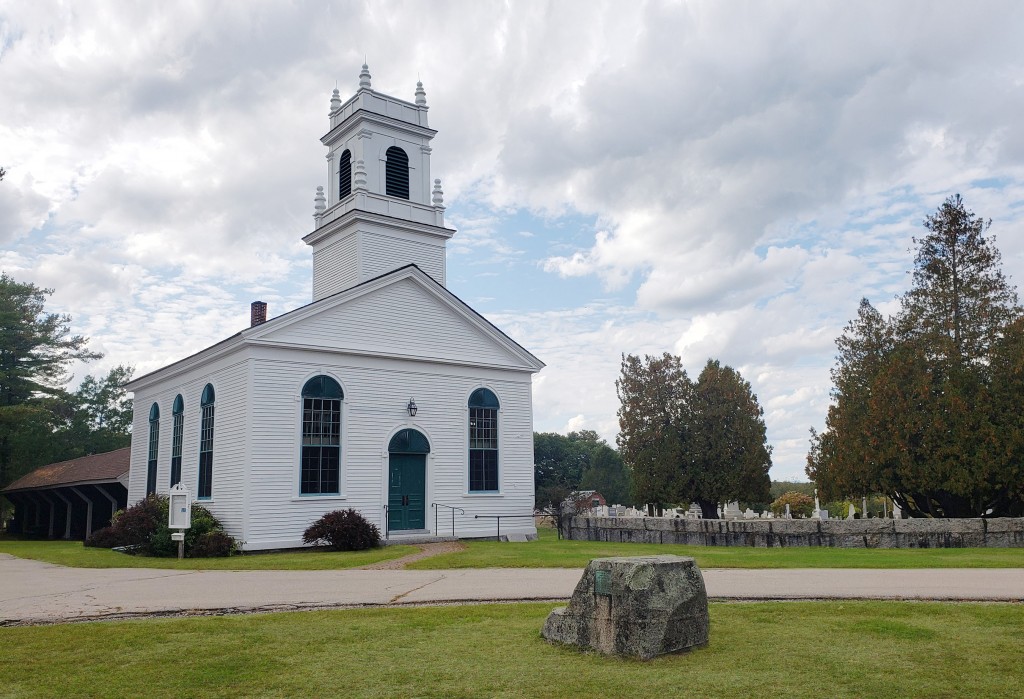 The meetinghouse in Newington. Photo by Marshall Hudson

John Adams, second president of the United States, visited his uncle in Newington in 1770 when the future president was a young lawyer and circuit-rider judge. In his journal he wrote that he admired his uncle’s preaching style, described as “delivered in a powerful and musical voice, consisted of texts of scripture, quoting chapter and verse, delivered memoriter and with-out notes …”

The meetinghouse was also used as a school up until about 1750 when a schoolhouse was built.  One scholar is recorded as saying, “In 1738 we went to school in the meetinghouse. Rev. Joseph Adams was our teacher. There were about twenty of us. We brought our own slates and food — and the Teacher et most of it.”

A freestanding belltower with steeple was added to the west side of the meetinghouse to accommodate the bell from England. This tower was struck by lightning, necessitating repairs in 1744. Apparently, rum was required to fix the belfry, as records show that it was voted to expend 5 pounds and 14 shillings for five gallons of rum to be used raising the belfry and another 308 pounds for other costs. This steeple was struck by lightning and repaired several times over the next decades, until the townspeople decided that maybe the steeple portion was not meant to be and left it off, repairing only the belfry.

In 1803, the original bell was struck by lightning and it cracked. Newington selectmen had it hauled by ox team to a bellmaker in Boston named Paul Revere and asked him to recast it. Revere offered a better deal and, being frugal selectmen, they took his deal. They exchanged the damaged bell and $210 for a different bell Revere had already cast for a church in Pembroke, Massachusetts. Revere’s bell was too small for Pembroke, but the right size for replacing Newington’s damaged bell. Revere’s original 1804 handwritten bill of sale is on display in the meetinghouse. I pulled the rope and rang Revere’s bell. Still works.

The building was modernized in 1838-39 to its present church-shape appearance. Windows were reconfigured, the main entrance was moved from the long south side to the east gable end, and the freestanding belfry was relocated onto the roof of the east gable end, effectively rotating the building 90 degrees without moving it. Why this was done is lost to history. The present main entrance on the east side had originally been constructed as a private entrance to the pew of the settlement’s wealthiest citizen, Col. John Downing. In addition to his private pew entrance, the colonel was also granted his own window and permitted to construct a tomb beneath a corner of the building. The slab of the tomb remains and indicates that Downing died in 1739. Legend says that Downing was buried in this tomb but was relocated to a cemetery 100 years afterward during the 1839 building renovation.

Behind the old meetinghouse is a row of horse sheds. Once common at meeting-houses, they provided a place for meeting-goers to park their horses while attending town meetings or church services. These old horse sheds provide a clue to the purpose of the stepped rock outside the front door. This meetinghouse was constructed before there were roads and carriages to bring people to meetings and church. Travelers arrived by foot or on horseback, and ladies wearing petticoats and long dresses found it challenging to swing up onto a horse in a proper 1700s ladylike manner. So, while their husbands held their horse in front of the rock, the ladies ascended the steps to the flattened top and demurely scootched onto the horse, thus avoiding any ankle flashing or wardrobe malfunctions. This rock certainly has seen things come and go.