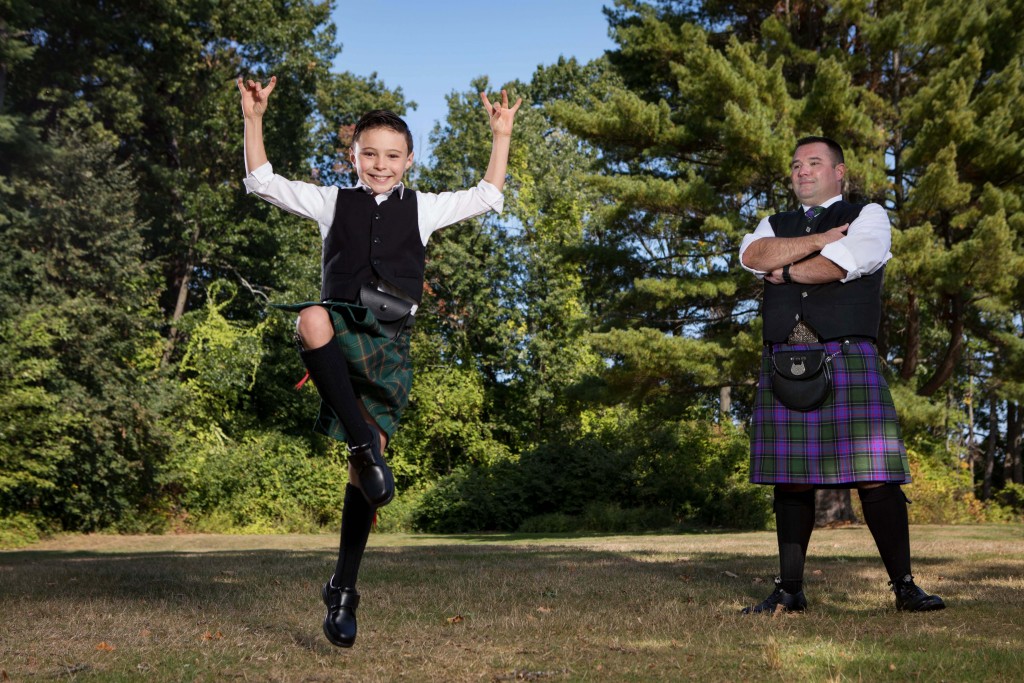 New Hampshire Magazine sales representative Josh Auger models the New Hampshire tartan while his son Julian practices his moves. Julian is learning both Scottish and Irish step dancing. The Auger family attends the New Hampshire Highland Games each year, as Josh is on the board of NHSCOT, the state’s Scottish cultural organization and host of the games. Photo by Kendal J. Bush

“You men of northern Vermont and northern New Hampshire,” said one-time British Ambassador to the United States James Bryce, “have had hearts full of love of freedom which exists in mountain people … [and] the indomitable spirit and the unconquerable will which we always associate with the lake and mountain lands of the Alps and Scotland.” The rocky brown summits of the Presidential Range in summertime, when cloud-filtered sunlight greens them up and tinges the atmosphere with violet, are weirdly reminiscent of the Scottish Highlands.

Yet New Hampshire resembles Scotland even more in the way the inhabitants of both places derive their sense of geographical identity primarily from their mountainous areas. A certain rustic nobility attaches to Lowland Scots and Rockingham County Flatlanders alike by virtue of their living north of a political line that happens also to encompass rough places. These lowlanders tend, rather unfairly, to look down on the lowlanders living south of that line. Meanwhile, England and Massachusetts both feel a mixture of horror and charm on contemplating the ragged lands to their north.

An Englishman once told me, after I mentioned I’d lived in Scotland for a couple of years, that it was “a drunken land of misery.” Emerson famously said, “The God who made New Hampshire taunted the lofty land with little men.” Yet Bostonians subscribe to Yankee Magazine and suit up in L.L.Bean to strike out for the huts of the AMC, while the posher sectors of English society have long been enamored of tartan, single malt and hillwalking.

I doubt whether very many Scots get together to ride Harley-Davidsons or sport T-shirts emblazoned with the words “Live Free or Die” (although what was it Mel Gibson told his array warriors, who looked like they’d fit in at Bike Week?). But every September some 30,000 people — many without a trace of Gaelic DNA — gather in New Hampshire’s White Mountains to have fun pretending they’re Scottish. They don kilts, listen to bagpipes and fiddles, dance and drink whisky, and — if they’re half as brave as William Wallace — eat haggis. And, of course, the New Hampshire Highland Games are always awash in a sea of clashing tartan. 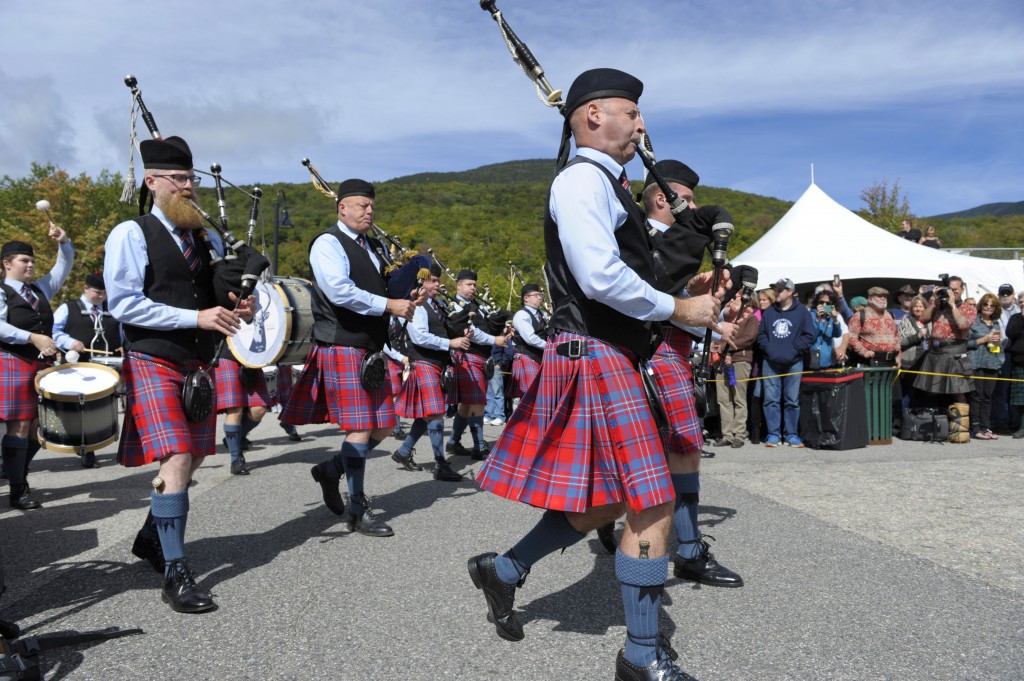 Due to COVID-19, this year NHSCOT canceled the live New Hampshire Highland Games, instead hosting Rocks, Hammers and Trees, an amateur heavy athletics training and competition that a few socially distanced spectators could watch at Loon Mountain. The usual event, which draws thousands of people from across the US and abroad, is currently planned for September 2021. It will be the 46th games. Photo Courtesy of NHSCOT

We imagine tartan originating as a symbol of clan (or extended-family) membership, but historians say this is a fiction created in the 19th century as a bizarre blend of marketing, romanticism, and a sort of nonthreatening, tail-tucking nationalism (which we could do with more of in these hackle-raising days). Myths condition reality more often than we like to admit, but in the case of tartan the process is refreshingly transparent. But myths beget rules all the same, and the world of tartan is full of them. And wherever there are unimportant rules, human beings divide themselves into two basic types: the stuffy pedants, who rely on do’s and don’ts for their sense of order and stability; and the fun-loving ironists, for whom rules merely presuppose a game to be played. People either take tartan very seriously, or not at all. The Scots themselves are inclined to tolerate either attitude, as long as the orders keep rolling in.

Did you know that New Hampshire has had a tartan all its own for over 25 years? It’s not unusual for US states, as well as Canadian provinces and territories, to have official tartans. Such a regional use of the woven patterns is actually in closer keeping with the original spirit of tartan than the contrived clan use. Because of the locally sourced materials they were made from, tartans in pre-19th-century Scotland said more about the wearer’s place of origin than about his bloodline.

There’s something fitting, then, about weaving together threads the color of New Hampshire’s own highlands to create a wearable textile symbol. (Maybe it’s a step too far to see our state’s textile history as a hidden layer in the symbolism.) It’s a notion that guided Ralf and Marguerite Hartwell, two expert weavers who lived in Newton, when they set out to design a Scotland-inspired symbol for the Granite State in the early 1990s to commemorate the 20th annual Highland Games. Newton’s location, smack against the Massachusetts border, makes for a nice analogy with the fact that tartan’s keenest Scottish promoters have often been lowlanders, despite tartan’s roots firmly in the craggy north. The Hartwells chose purple and green as the most conspicuous colors for the New Hampshire tartan — purple for the finch and lilac (state bird and flower) and green for our shady forests. There are also threads of black for the granite of the mountains, white for the snow, and red for the blood of fallen heroes. Never one to swoon for tartan, I confess I find it very pretty. If you ask me, it would make a much nicer outfit than the increasingly ubiquitous combat clothing I see in our once-friendly woods — and probably disguise you better than Tactical Assault Camouflage too!

Where to Buy NH Tartan
Starting in late fall, you can purchase New Hampshire tartan products through NHSCOT. They plan to have the retail portion of their website up and running in November.

Marguerite Hartwell died before the tartan took on a life of its own, but Ralf lived to see it officially adopted by the New Hampshire General Court in 1995. The New Hampshire tartan was initially produced by the now-defunct Pecora Wools, Ltd., in Laconia, and later by Lochcarron of Scotland. Profits from tartan sales proceeded into scholarship funds administered by the New Hampshire Gathering of the Scottish Clans and the St. Andrew’s Society of New Hampshire. Ralf Hartwell eventually conceded the rights to the St. Andrew’s Society on condition that it would never use profits for anything but scholarship funding. But the Society’s membership eventually dwindled to a point at which it was unable to fund further tartan production — and the tartan itself fell into near-oblivion.

But last year, Josh Auger and Andrew Richardson of NHSCOT, the state’s Scottish cultural organization and host of the New Hampshire Highland Games, managed to procure the rights to the pattern. Since then, production through Lochcarron of Scotland has recommenced, and yardage is expected to be available beginning in October. NHSCOT is developing a retail website and hopes to begin selling tartan accessories through the Statehouse and New Hampshire Made outlets. They are also in discussion with Vermont Flannel, exploring the possible manufacture of shirts and pyjama pants. A portion of all proceeds will continue to go to NHSCOT’s fund for scholarships and grants.