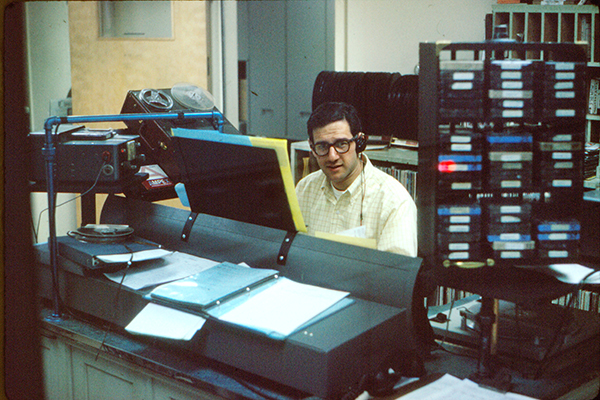 Just before we moved to Swanzey, New Hampshire, from New Jersey in 1955, one of my older sisters brought home a copy of “Rock Around the Clock” by Bill Haley and His Comets, which was played over and over on our second-hand Columbia 360 record player. It was my introduction to rock ‘n’ roll, and curiously pleasing to my 6-year-old ears.

We made the move when my parents bought a women’s clothing store on Central Square in Keene. We brought with us a 10-inch RCA Victor TV, but in the era before cable television, reception was poor, unless you had a serious antenna on your roof. We did have a trusty GE desk radio plugged in near our kitchen table, and I gravitated more to that than to the TV, notwithstanding it being, we’ve all later concluded, the golden age of television.

Before the move, my father bought that used record player in a fine wooden case, and a stash of used 78, 33 and 45 RPM records, covering the gamut from pop to show tunes to classical. My father’s tastes leaned more to opera and symphonies, but from that motley record collection I had my first and only course in music appreciation.

Occasionally, I’d buy new records at Beedle’s Music Center on Main Street, or at the Melody Shop, which was two doors away from my parents’ store. But it was that old collection of my father’s records that kept a musical hold on me.

As I got a bit older, I would put the old record player next to a Sears, Roebuck tape recorder my father had bought for me, and, together with one of my best friends, would make our own “radio programs,” playing records from our collection, and reading news and commercials from the Keene Sentinel.

Those programs led directly to our deejaying record hops at Monadnock Regional High School. Usually held on Friday or Saturday nights, we’d borrow equipment from the school’s audio-visual department, and records from a few of the students, one of whom seemed to purchase at least two or three new 45s a week.

While both of my sisters eventually gravitated to Calypso or to Viennese waltzes and classical piano music, I remained with rock. Our town had one radio station at that time, WKNE (for which I would later work as a disc jockey), but its format was Middle of the Road (MOR), featuring the likes of Patti Page, Jo Stafford, Nat King Cole and Frank Sinatra. For the music I liked, I’d have to tune to Boston’s WBZ, or at night when the radio signals were better, to New York’s WABC. Later, Buffalo’s WKBW would be added to my list of 50,000-watt radio powerhouses that featured a Top 40 format.

For all the music that would follow, “Rock Around the Clock” remains, to me, the gold standard. From the “one, two, three o’clock, four o’clock rock” opening, its driving syncopation, and its raucous blend of saxophone, bass and guitars, it was the perfect dance record. First recorded in 1953, it was re-released in 1955 in conjunction with its being on the soundtrack of the movie “Blackboard Jungle.” While critics and musicologists, professional and amateur, may debate which song actually spawned the rock ‘n’ roll age, Haley’s megahit could very well be the consensus choice. 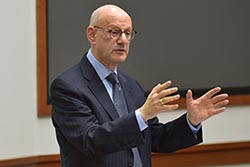 I only recently learned that the Michigan-born and Pennsylvania-raised Haley had a Keene connection. For a brief time in the mid-1940s, he joined a western swing group called the Down Homers, and later formed his own group, the Range Drifters, that performed on WKNE. For a while, he was a disc jockey at the station. When I arrived at the station in 1966, the MOR format was still in place, and the Beatles era was into its seven-year run, played out in Keene on a competing station featuring a rock-only format. Haley and his contemporaries had been unceremoniously pushed aside, only to be re-discovered years later with the popularity of the TV show “Happy Days” and the motion picture “American Graffiti.”

I worked parts of six years at WKNE, on weekends, summer vacations and during the Christmas holidays. I even entertained the idea of making radio announcing a career, but the pull of public service moved me in a different direction entirely. I went to University of New Hampshire and received a degree in history (and did some announcing on WUNH on the side), and then went on to Brandeis University, where I received a master’s degree in contemporary Jewish studies.

With that, I embarked on a career in Jewish community relations, working for such organizations as the Jewish Community Council in Boston and the Anti-Defamation League. For the past 30 years, I’ve been at B’nai B’rith International, the oldest Jewish service organization in the US; the past 19 years as its CEO.

Today, I must have “Rock Around the Clock” on a dozen oldies compilations that I keep in my car to play on my way to work. Rather than sounding like a musical dinosaur, its incessant beat remains as fresh as it did the day my sister announced she had bought a new record that was all the rage. Sixty-plus years later and counting, it conjures up record hops and dancing with abandon to a new sound. Haley died too young, at the age of 55, in 1981, yet he lived long enough to see his infectious hit become a national musical icon.