The Dancing Lady Windmills of Groton 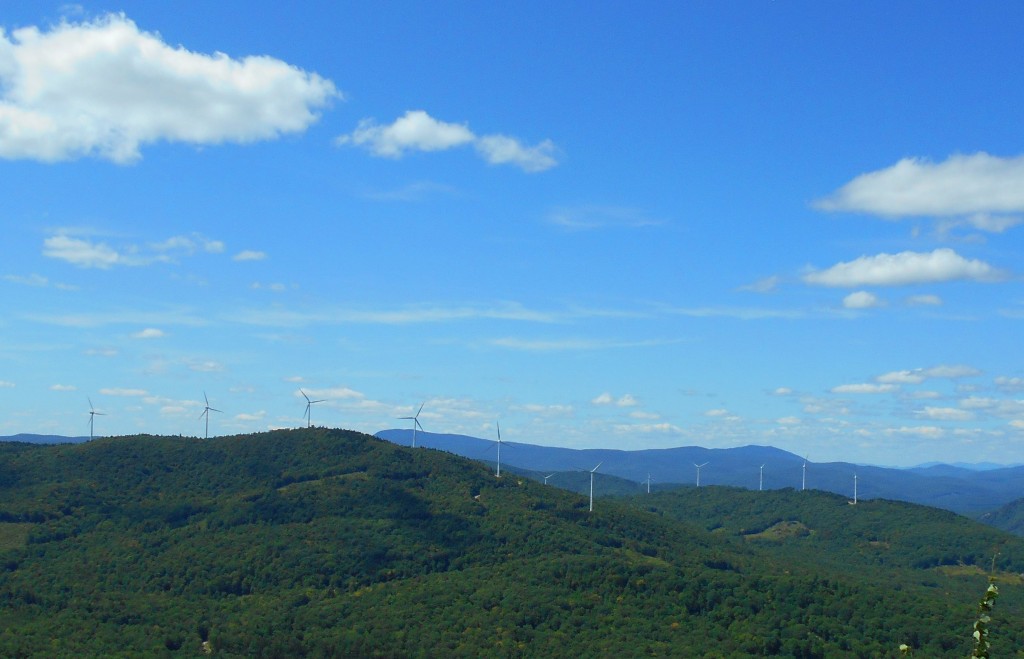 Dubbed “The Dancing Ladies,” these windmills are located on a ridgeline in Groton. Photo by Marshall Hudson

They look like dancing ladies. I’m driving west on the Tenney Mountain Highway headed for Rumney, and off in the distance I can’t help but notice the line of windmills perched atop the Groton ridgeline. The blades of the windmills are turning at a mesmerizing pace, neither fast nor slow, and they capture my attention as they likely do with everyone who drives this stretch of road with their eyes open. When the wind speed and direction is right, the blades of adjoining windmills fall into a rhythm and rotate in a seemingly synchronized pattern. As the road and the ridgeline twist and turn, converging and diverging, two or three of the windmills momentarily fall into a straight-line alignment with my location.

This straight-line alignment, coupled with the synchronized pattern of blades disappearing below the ridgeline and reappearing a moment later, resembles the Radio City Music Hall Rockettes or the Dallas Cowboy cheerleaders as they perform their linked-arm, long-line, high-kicking routine. Viewed individually, each tri-blade propeller perhaps resembles a white-clad ballerina doing a graceful leap while extending an arm above her head. In an apparent compliment to these wind turbines, some of the locals have dubbed them “The Dancing Ladies.”

The windmills all look alike, and they vanish and reappear as you progress down the road, creating an optical illusion as to the number of windmills there really are up on the ridge. I’m focusing on driving and can’t readily determine whether the one that just appeared is a new one, or one I’ve already counted. I’m wondering how many there are. Another optical illusion is the size of the windmills. As seen from the distant highway, they appear only inches tall. Judging by surrounding trees, I’m guessing their height at 40 to 60 feet or the approximate height of a five-story building,

I’m also noticing that while most of the blades are rotating in this long line of windmills, there are one or maybe two that are stopped and motionless. Is the wind up there intermittent, or spotty and gusting from different directions? Why are some spinning and some aren’t? I decided I needed to find out. I know a guy and gave him a call.

The wind towers are owned and operated by Avangrid Renewables, which is headquartered in Portland, Oregon, but the towers are situated on privately owned property. Avangrid Renewables pays a lease fee to the landowner for the privilege of placing their windmills on the landowner’s property. Avangrid also makes a payment in lieu of taxes to the town of Groton so that the landowner is not assessed for the windmills in their property tax bill. Some of the landowners allow nonmotorized activity on their property such as hunting, hiking, or cross-country skiing, and my contact arranged permission to bring me onto the site for an up-close introduction to the dancing ladies.

I learned that there are 24 wind turbine towers situated on two adjoining ridges. The combined 24 towers produce an average of 48 megawatts, or enough electricity to power 20,000 New Hampshire homes. At peak production, this wind farm can generate enough electricity for approximately 58,000 homes. I also learned that the turbines and propeller sit atop a 256-foot-tall tower. Each blade in the propeller is 139 feet long from tip to nose. This gives a total height of almost 400 feet from the base of the concrete foundation to the extreme end of the blade at the peak of its rotation. About 10 times greater than the 40 feet that I had guessed. While they may appear only inches tall from the highway, up close, they are jaw-dropping tall. 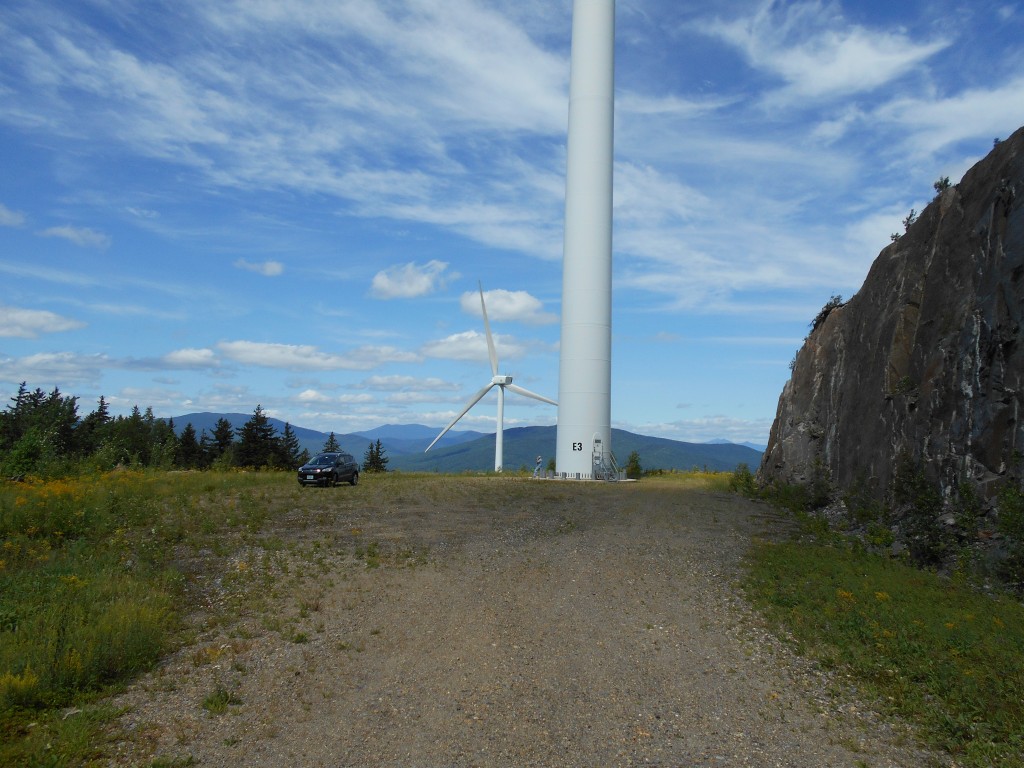 The windmills, from the concrete base to the tip of the blade at peak rotation, are 400 feet tall. Photo by Marshall Hudson

The propeller blades are designed to face into the prevailing wind to maximize energy production, and the windmill head has a drive motor and gear system allowing it to rotate some 200 degrees to maximize the best wind direction. A velocity sensor measures wind speed and direction, and reports the data to an electronic controller in Portland, Oregon, who then turns the head of the windmill back in Groton. To extract the maximum energy from the wind, the individual blades must also be positioned at the correct angle. The blades can be adjusted individually to grab a bigger bite out of the air when wind conditions are slow, or less bite when the wind is really humming. Too much wind will trigger a shutdown so as not to damage the blades or turbine.

When the wind is gusting from an irregular direction, one tower might steal the wind of another, causing the follow-on windmill to shut down due to inadequate air flow. So stolen wind, too much wind or a planned maintenance shutdown could explain the odd appearance seen from the highway of most windmills rotating but one that isn’t.

Proponents of this wind farm, or windmills in general, say that we need to diversify our energy production away from fossil fuel-burning energy production plants, and that wind power is a safe, nonpolluting, readily available energy source that needs to be part of the solution to wean off nonrenewable or polluting forms of energy production. Opponents point out that, when the wind isn’t blowing, we still need to fall back on conventional fossil fuel-burning plants, so wind farms create a duplication in infrastructure while not eliminating any coal-burning plants.

Opponents of these windmills have also suggested that they are noisy and have a negative impact on wildlife, particularly migrating birds or bats. A wildlife impact study by Stantec Consulting of Maine was conducted here, and no signs of bird or bat kills were observed. They did see an increase in wildlife that prefer the habitat created by the gravel service roads. Deer, moose, black bear, turkeys, coyotes, birds of prey, etc., have expanded in the area. On the day I visited the site, a bobcat, unconcerned by my presence, strolled across the road in front of me, and a hawk playing in the thermal currents drifted between the rotating blades. Perhaps I was there on a quiet day, but the wind noise created by the windmills was quieter than traffic noise on any moderately busy road.

Perhaps the biggest complaint by wind farm opponents is that they are visually unattractive and detract from the beauty of the natural mountain scenery. I can respect that opinion, but I don’t think they spoil the view here; they look like dancing ladies.