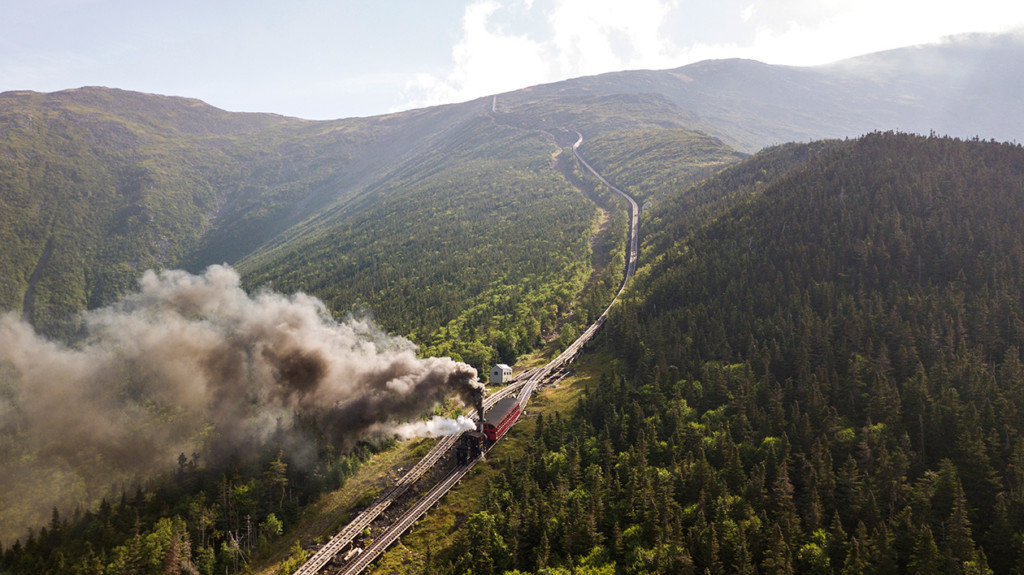 This is one of the Cog Railway’s coal-powered steam engines that still bring tourists to the summit of Mt. Washington. They don’t make every trip — they only run once or twice per day. Photo by Joe Klementovich

Sylvester Marsh was an enterprising young man, hiking to Boston from his Campton farm at age 19 to work at Quincy Market. He quickly moved on — and up. A founder of the Chicago meatpacking industry, he made his fortune after devising a process for drying corn and grain, which was used in the making of cereal. Returning to New England, he and friends developed a steam-driven locomotive that climbed on cogged tracks. New Hampshire legislators greeted his plan for a railway up Mt. Washington with derision, but granted a charter, never expecting the project to proceed. With eight others, Marsh bought 17,000 acres extending to the summit, and by August 1866, completed enough track to host dignitaries and rail tycoons on a short ride. Railroad money soon flowed in to complete the track and Marsh’s dream became reality. Sadly for Marsh, his big investors soon pushed him out and he retired to Concord, where he died in 1884. His legacy, however, lives on — the Cog Railway is celebrating its 150th anniversary. — Barbara Radcliffe Rogers

The Cog Cleans Up

Since the mid-1800s plumes of wood or coal-generated smoke and steam have appeared over the Mt. Washington Cog Railway tracks on their 3-mile route to the top. In 2008, the first eco-friendly version of the Cog was cranked out by the railway shop crew. For more than a century, the engines have been built and maintained on-site. This one featured a biodiesel-powered John Deere engine that ran much cleaner than coal and the fuel was even cheaper. This development, along with such innovations as the use of solar-powered track switches, show that the Cog is a technological envelope-pusher as well as a historical people-mover.

On July 3, 1869, Old Peppersass became the first cog-driven train to climb 6,288-foot Mt. Washington. One hundred and fifty years later, the Cog Railway is designated a National Historic Engineering Landmark. To celebrate the sesquicentennial, a number of special events are planned throughout the 2019 season.

The refurbished Peppersass went on tour to Pennsylvania and Washington, DC, in March and will be coming to a town near you throughout the year. Look for her to appear at rest stops, town festivals and parades around New England. Meantime, on June 22 at Marshfield Base Station, the company is holding a history and fireworks celebration, with a special Cog Railway employee reunion taking place the next day, June 23.

Book a space at the gala or on the Cog for a ride here: thecog.com. — Dan Szczesny 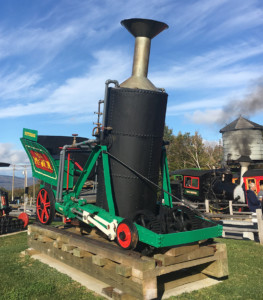 When Sylvester Marsh had the first experimental locomotive built to perform the “impossible task” of summiting Mt. Washington, it was constructed from his plans at the Campbell Whittier & Co. machine shop near Boston. Once built, it was broken down and transported by train to Littleton, then ox-carted 25 miles to the Mt. Washington site and reassembled. Marsh dubbed it “Hero.” Reportedly, when it was unveiled on August 29, 1866, someone in the crowd observing the tall upright boiler cried out, “It looks like a peppersauce bottle.” Being a Yankee, the person pronounced the word as “peppersass” and that name stuck. Another story says that Marsh’s daughter Mary, who was fond of pepper sauce, bestowed the moniker. Either way, Peppersass went on to help build the cog railway and now welcomes visitors to the Cog when it’s not out on tour or making a star appearance at a steampunk festival somewhere.

In its 150 years of operation, there have only been two fatal accidents on the Cog Railway. In 1929 photographer Daniel Rossiter was killed in an accident on Old Peppersass. The worst of the two, which claimed eight lives, happened on September 17, 1967. At the time, it was the brakeman’s job to throw the switches, a complicated series of nine moves that was considered the most difficult such system in the world. For those who haven’t ridden the Cog, after the train reaches the Halfway House, which marks the middle of the trip, you approach the imposing Jacob’s Ladder, the highest and steepest railroad trestle in the world. After that daunting portion of the journey is over, the steep climb continues to Long Trestle. The track then levels off a bit as you reach Skyline Switch, located just below the summit. It was here that things went terribly wrong on that day 52 years ago.

The final train of the day began the descent with a packed passenger car. As the train reached the Skyline Switch, it didn’t stop — which was perfectly normal. Back then, trains didn’t stop for switches, and the crew had no reason to believe that the switch wasn’t left in the straight position, but it wasn’t.

Unlike traditional trains, the Cog uses its namesake — a cog (picture a wheel with teeth) that engages a ladder-like rack to propel the train. When the engine hit the switch, the engine rose up suddenly and crashed back down, knocking the front and rear cogs out of the rack. The engine then fell off the track, leaving the coach by itself. There were just seconds to hit the brakes before the coach’s front cog hit the switch, just as the engine’s had. The brakeman wasn’t quick enough. After it hit, the brakeman and a passenger tried to apply the brakes to the up-mountain axle, where the cog was still in the rack. It didn’t work, and the coach was riding on its wheels only, picking up speed as it started down Long Trestle. With now-useless brakes, there was no way to stop. The car fell off the trestle, smashing one end and killing eight people, three of them children.

Despite that awful tragedy, the Mount Washington Cog Railway has the best safety record in the world. Today, the switches are solar-powered and automated, and the trains stop before each one, assuring it’s in the correct position.