This month brings a variety of events, from concerts to antique shows to festivals 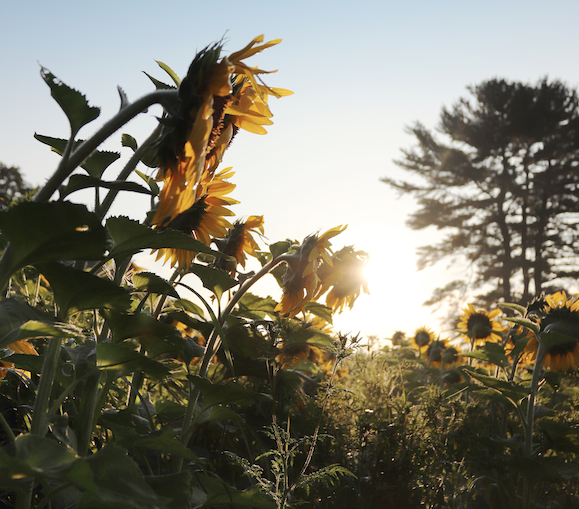 The Sunflower Festival at Coppal House Farm in Lee is back from July 31 to August 8.

Larissa Fassler is interested in how the architecture of cities affects people both physically and psychologically. After a period of reflection, Fassler created four new monumental drawings that reflect her impressions of Manchester’s downtown through intricate compositions featuring maps, annotations and imagery. Her works explore the use of public spaces, the role of community organizations in supporting the needs of citizens, and the effects of poverty on the physical, mental and emotional health of a community. currier.org

Wander through six acres of sunflowers with their happy countenance aglow in orange and yellow — it’s agri-entertainment at its most colorful. During the festival, special paths are cut though fields to enable viewing from many angles, and several sunrise and sunset times are limited to photographers and artists. Afterward, visit the farmstand for fresh eggs, just-picked produce and the farm’s award-winning, cold-pressed sunflower oil. Don’t forget to check out their sunflower variety garden that will be open starting August 9. From late August through October, the corn maze can be traversed by flashlight on specific nights. nhsunflower.com

Start clearing out the car — you’ll want plenty of trunk space for this. Artisans and crafters from around the state set up shop at this massive fest, which boasts the title of the oldest continuously running craft fair in the U.S. Come ready to shop or just to learn and admire, either in the learn-how-it’s-made workshops scattered throughout the week or in the exhibition building full of curated art shows. There’s also chances to meet artisans one-on-one and other fun events held throughout the week. nhcrafts.org

The 61st Edward MacDowell Medal will be awarded to composer and performer Rosanne Cash during a prerecorded televised special on New Hampshire PBS on August 8. Experience Medal Day with Rosanne Cash as she explores the 450-acre grounds of one of the nation’s most venerable artist residencies, performs with recording star Emmylou Harris after the ceremony, and then meets artists-in-residence at their studios to learn about their work. This year, Cash, the winner of four Grammy Awards and 14 nominations, including the 2019 nomination for her song “Crossing to Jerusalem” from her latest album “She Remembers Everything,” joins past medalists including Leonard Bernstein, David Lynch, I.M. Pei, Thornton Wilder, Joan Didion, Aaron Copland and Toni Morrison. The medal is awarded annually to an artist who makes outstanding contributions to American culture. (Note: New Hampshire Magazine is a proud sponsor of this event.) Visit macdowell.org for information on how to tune in and learn more.

A reimagined telling of “The Wife of Bath’s Tale” of Geoffrey Chaucer’s “The Canterbury Tales,” “Far From Canterbury” takes us to a world where fairy tales are considered current events, and tells the story of a shy young knight who will be sentenced to death, unless in one year he can answer one simple riddle: What is it that women desire most?  barnstormerstheatre.org

The best antique dealers from across the Granite State come together to give you an unforgettable summer show. It’s considered the best show of its kind in New England and, with over 50 exhibitors, it won’t disappoint. The professional antique dealers save merchandise throughout the year and offer a wide range of both country and formal antique furniture and accessories. Look for items like paintings and textiles, Shaker furniture, clocks, lighting and so much more. $10-$15. Thurs-Fri 10 a.m. to 7 p.m., Sat 10 a.m. to 4 p.m., The DoubleTree by Hilton, 700 Elm St., Manchester. nhada.org New Hampshire Magazine is a proud sponsor of this event.

Chris Lane has some “Big, Big Plans” for his one night show at the Hampton Beach Casino Ballroom. Grab your cowboy boots and jam out to crowd favorites like “Take Back Home Girl,” “I Don’t Know About You” and “Fill Them Boots.” casinoballroom.com

Shameless plug alert! For our 20th annual Best of NH celebration, we’re headed to the beautiful and historic grounds of Canterbury Shaker Village. The evening includes tours of the village, cocktails, catered dinner and entertainment from the state’s beloved Yankee humorists Ken Sheldon and Rebecca Rule, plus live music by Fee and the Evolutionists. Another change this year — tickets are limited (just over 300 are available), so don’t procrastinate. This is an outdoor event, and we’ll be following the CDC guidelines for safe in-person events. Seating at tables will not be limited to single parties. The fun starts at 5:30 p.m., but guests who’d like to take the 45-minute tour will need to arrive at 4:30 p.m. bestofnh.com

Run in person or virtually for this fun run. The event starts on Sargent Road, and then heads north onto Mammoth Road before turning onto Otterson Road for an out-and-back loop that ends at the Londonderry athletic fields. When you finish the race, use your beer ticket to redeem your post-race beverage from one of the breweries in the beer garden like Backyard Brewery or Great North Aleworks. millenniumrunning.com

Put on your poodle skits, grease up your ducks’ tail hairdos, buckle up and cruise in to the Wright Museum for this annual event dedicated to unique varieties of cars and motorcycles. Only the first 75 cars will be allowed into the show this year, so get your car registered soon. Food will also be available to purchase from MacDaddy’s Rollin’ Smoke BBQ food truck. wrightmuseum.org

Head to Colebrook to celebrate all things moose. This year’s festivities include live music, arts and crafts vendors, and rumor has it that a moose-calling contest is planned. There will also be a dog show, maple syrup tasting contest and the classic car show. Bring the whole family to this old-time fun event that showcases the many diverse talents and services in the North Country. chamberofthenorthcountry.com