Sunapee Harbor Is a Hidden Gem 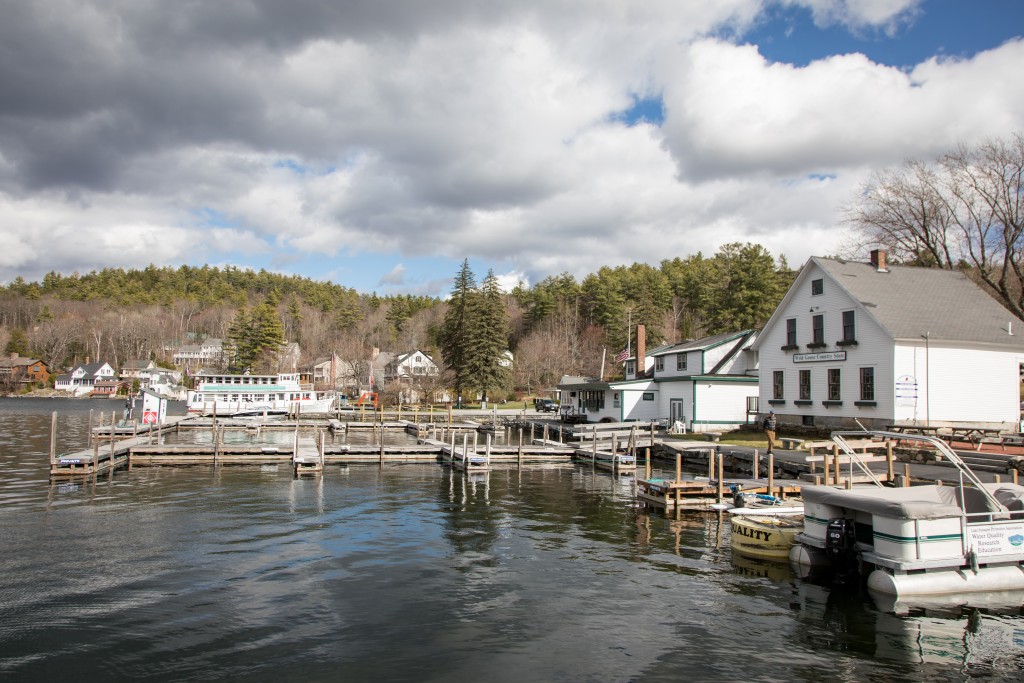 Sunapee Harbor may be small, but it’s well worth your time this summer. Photo by Kendal J. Bush

Tucked away between Newbury, Newport and New London, the quiet community of Sunapee Harbor has been making some happy noise this spring. That’s good, since many of the folks who visit Sunapee every year drive right past the rustic summer-camp-style sign that points the way to the harbor, missing out on a half-day or more of shopping, noshing and relaxing on Sunapee Lake. Bill and Pamela Stocker, owners of the Sunapee Rock shop, are helping spread the word. “We’ve met folks who’ve come to Sunapee for years who never realized there was such a thing as Sunapee Harbor,” says Pam Stocker. “It’s one of those best-kept secrets about a half-mile from the main highway.”

Two folks who are very familiar with the chill bliss of the harbor, Henry and Harriet Ford of Hillsborough, have been summering on their sailboat at the harbor slips for 35 years. “Sometimes we just sit on the sailboat and watch all the theatrics on the harbor,” recalls Harriet before Henry pipes in, “We go out and anchor to swim and snorkel.” The couple appreciate the lake and the harbor for the cleanliness and laid-back atmosphere. “It is not as commercial as the other big lakes. All of the homeowners around here are very protective of the lake.” Henry and Harriet look forward to having their boat back in the water in the next few weeks as summer draws closer. July and August are prime tourist months at the harbor, where the area typically sees the population expand to double, sometimes triple the year-round population.

If you don’t happen to have a boat or a friend with a lakehouse, you can book passage on one of the daily excursions offered by Sunapee Cruises. The dinner cruise on the MV Kearsarge heads out every evening at 6:30 p.m. for a two-hour dinner cruise. If a grab-and-go lunch is more your style, you can visit the Anchorage, pick up a lobster roll at Fenton’s Landing or treat yourself to some smoked BBQ at the Wildwood Smokehouse. The daily 2 p.m. cruise lasts about an hour and a half, and provides a narrated tour that includes close-up views of the harbor’s inland water lighthouses.

Tim Fenton has worked on boats for 22 years and married into the family that’s owned Sunapee Cruises since the 1960s.

“My wife and I met on the boat — it’s a big part of our family history,” says Fenton. “It’s a labor of love, which most family businesses are.”

Local business owner Rick Mastin casually leans against the gunwale of the MV Kearsarge and chimes in, “This and the Anchorage are the reason people come here. There’s a place to eat and a boat ride that draws people to the other businesses.” 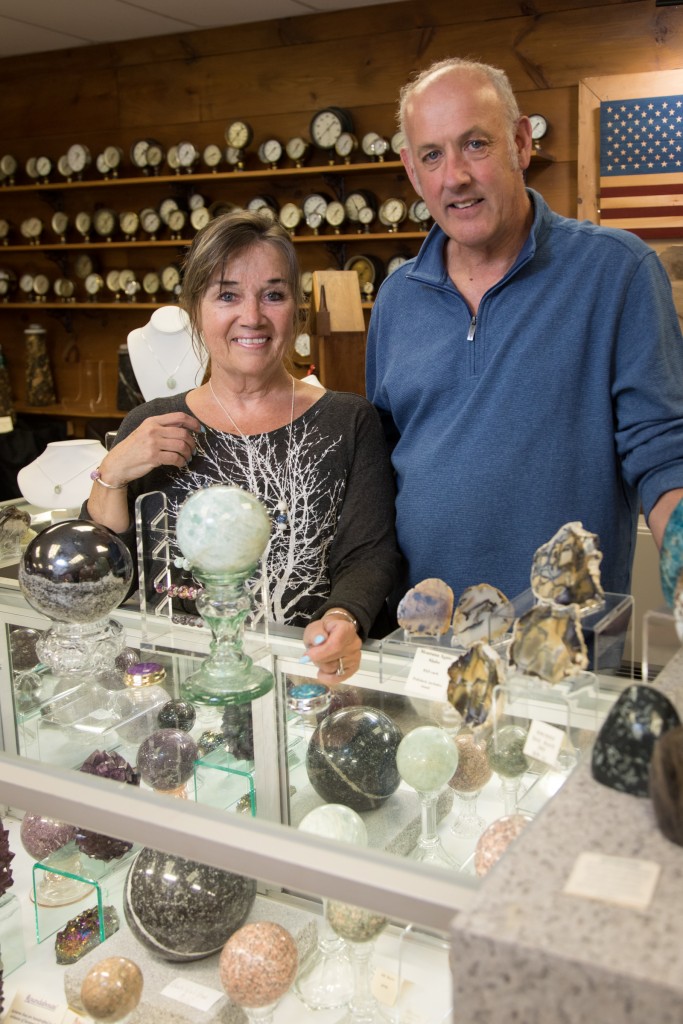 But, Mastin notes, those are really just starting points to a growing community of attractions.

One of the newest additions to the business community is the A & E Harbor Shop run by Ayla and Elyn. The small shop perched across the harbor offers Sunapee souvenirs as well as handmade items from other young entrepreneurs in the area. Ayla, 13, and Elyn, 10, started their business in a small corner of an aging building that they quickly outgrew. “We kept expanding — we were doing really well and Mom kept getting us more inventory,” recounts Ayla. “I do payroll,” interjects Elyn “and we made the ‘meet-the-maker’ posters so people who come to the store can learn about who made the items.”

The girls are grateful for the local business people who helped them get a start. “Mr. Mastin [Rick] and Mr. Flint [Cory] gave us a few of their product lines. Mom is a CFO of a company, so she taught us about accounting and payroll,” says Ayla. The girls haven’t hit a profit yet, but they are optimistic that the business will move into the green this summer. The top-selling item in the shop was also created by a young Sunapee entrepreneur, Beck Johnson, who started the Sanctuary Dairy Farm ice cream business when he was 13.

“He’s a role model to other kid entrepreneurs around here,” says Ayla. “He started a successful business that is still going even though he is in college now. It’s the best ice cream in town, its locally made, everything is fresh, they even have a petting zoo at the dairy farm.”

Mastin leads the way down the hill for a short stroll over to the Wildwood Smokehouse, where Debbie Samalis serves up breakfast at the 22-seat (23 if you count the saddle) restaurant where all of the ingredients are fresh and everything is handmade. “It’s a small establishment,” says Samalis, who runs the smokehouse with her son Ben, who is also the cook.

Having owned several large restaurants in Manchester before relocating to Sunapee, Samalis says the small size was intentional. The western saloon-themed bar opened as a local hangout. Now the smokehouse offers a Sunday Reggae-themed brunch from 10 a.m. to 2 p.m. with all your breakfast favorites, out-of-this-world quarter-inch slices of bacon in a maple glaze and the almost-famous make-your-own bloody mary menu. In addition to a killer Sunday brunch, the Wildwood Smokehouse is known for the BBQ brisket cooked in the authentic wood-fired smoker, which is fed hourly. Samalis shares her optimism about changes to the harbor: “It’s really nice, the direction the harbor is going. There is a farmers market starting this summer and the Fentons have a new boat on the way.” 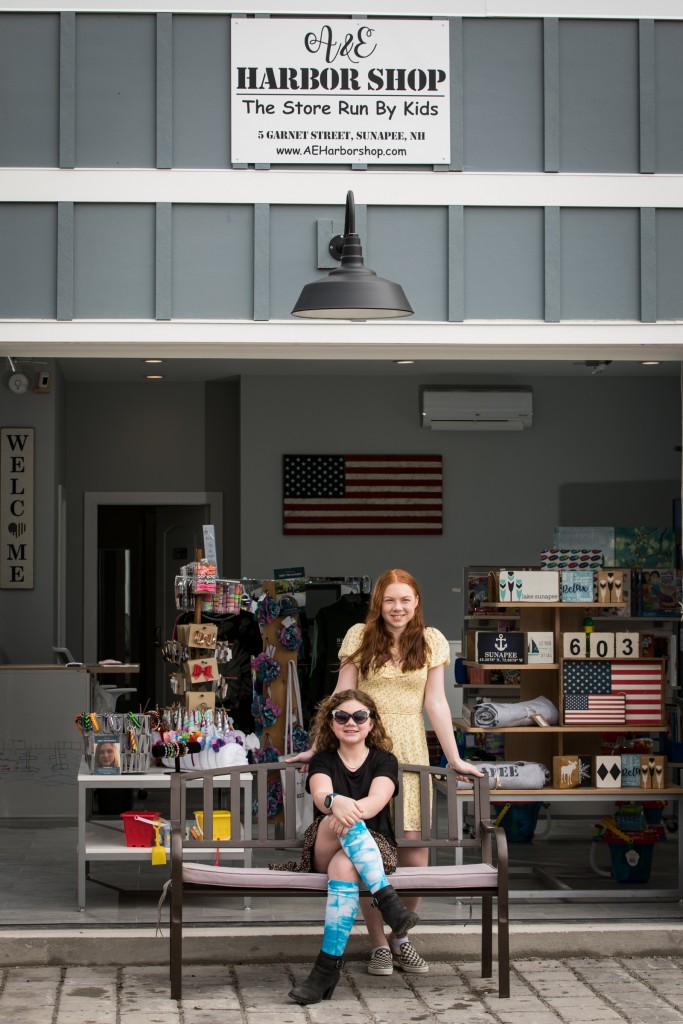 Between bites of a fluffy handmade waffle topped with whipped cream, banana and pecans, I ask Mastin how he and Samalis met. “She has the alcohol,” Mastin laughs while turning down a bloody mary (because “it’s only 11 a.m.”). “This was the end of the day,” he recalls. When Mastin and Cory Flint embarked on their Prospect Hill business journey, this is the spot where they would review the day’s work.

The venture that began with Prospect Hill Antiques in the Georges Mills section of Sunapee. It’s since grown to include Prospect Hill Home, which occupies the building formerly used as an ice house.

Although the harbor location offers a variety of unique antiques, fine art and custom furniture are the main attractions.

After taking a stroll through all three levels of the gallery, Mastin starts up his 1932 Ford Tudor for a ride over to the Prospect Hill flagship location about five miles from the harbor. Stopping along the way, he tucks his sleek black hot rod into the driveway of the Lake Sunapee Manor that’s home to “the Barn,” a former hotspot for music and dancing back in the late ’50s to early ’70s.

The Barn is a rock ‘n’ roll icon — it’s the first public place Aerosmith gigged together as a band. It’s rumored that Steven Tyler met Joe Perry at the Anchorage down on the harbor, and the rest is history.

After I snap a quick fan pic of The Barn, we continue on to the Prospect Hill Antiques Barn that gained notoriety in the ’70s as a place that transported East Coast Victorian antiques to California. After finishing high school, Cory Flint started working for the Sullivans, who owned the antique business. Years later, Flint bought the business and currently runs it with his wife Renee and general manager Mastin.

Cory and Renee are Sunapee natives, and they always knew they wanted to raise a family in the area.The 12,000-square-foot barn holds about 16,000 to 20,000 antiques at any given time. The shop is a popular destination for visitors as well as the folks who have homes here. “It’s been fun. I still love the business,” says Cory Flint. “It doesn’t feel like I go to work, ever — except when we are moving heavy stuff, then it feels like work.” 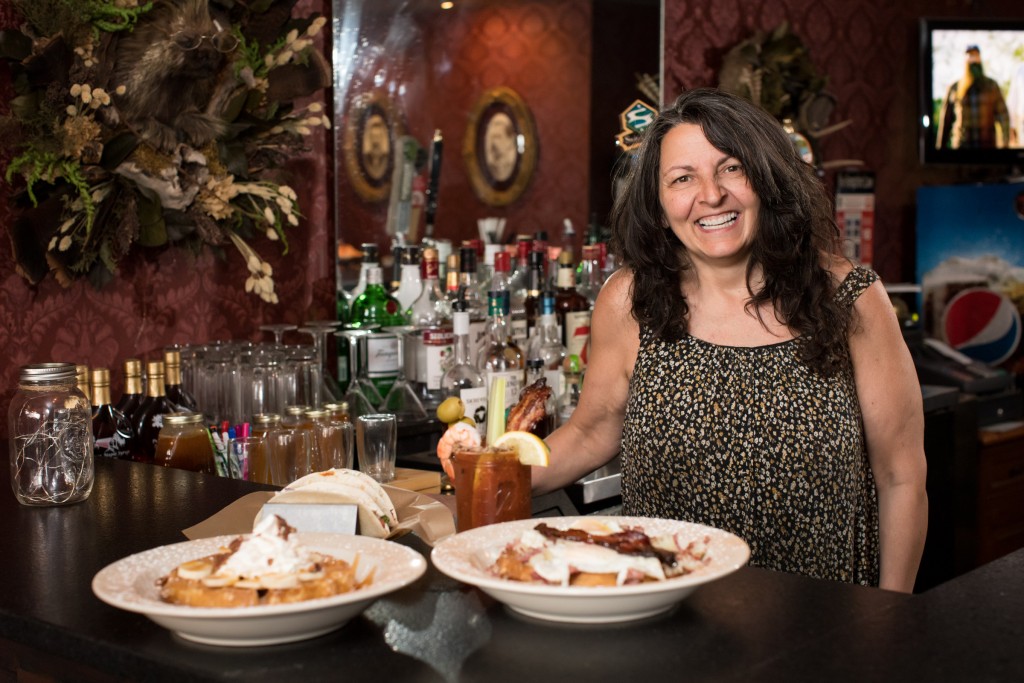 Debbie Samalis serves up breakfast to her brunch customers at the Wildwood Smokehouse. Photo by Kendal J. Bush

Sometime before the turn of the 19th century, steam-powered boats became part of everyday life on big lakes. Fifty-foot steamboats gathered tourists at train stations and delivered them to swanky hotels, private docks and towns that bordered the shores. On Lake Sunapee, for instance, travelers jumped off the Concord Railway in Newbury to climb aboard one of several steamboats that would make up to 20 stops.

Today, the harbor touts 18 businesses with options for dining, fine art, custom furniture, smoothies, ice cream, boat tours and more. There is also an abundance of hiking and other outdoor recreational opportunities year-round.

The “Land of the Flying Goose” was the name given by the original inhabitants of the area: “Suna,” meaning goose, and “apee,” meaning lake, are the Native American Algonquin words that describe the shape of the lake, with Sunapee Harbor as the beak of the flying goose. Today, about 3,500 residents call Sunapee home.

Rick Mastin and the other business members of the Sunapee Harbor community are working hard to spread the word about Sunapee’s best-kept secret. A Lake Sunapee Center for the Arts NH show planned for July 17 to 25 should help spill the beans on the harbor’s attractions.

“The harbor has been my go-to for years,” says Mastin. “Even when I didn’t live here, I’d come over for lunch, a beer, to run into friends and so on. This is the place to bring new friends or visitors so they see what I see when I say ‘home.’ As soon as I had the chance, I moved back to Sunapee after being away for a while.”

Now Mastin feels comfortable speaking on behalf of his business neighbors. “We are in a very amazing spot here,” he says. “The really cool crew that is building the harbor businesses make this place unique. Everyone is working together to make this a ‘worth it’ destination spot.”