Little Sister wasn’t much of cook, but Big Sister said, “If you host the party at your house, I’ll bring the food with instructions. It’ll be easy.” The plan was to serve ham with premade salads, chips, watermelon and ice cream. 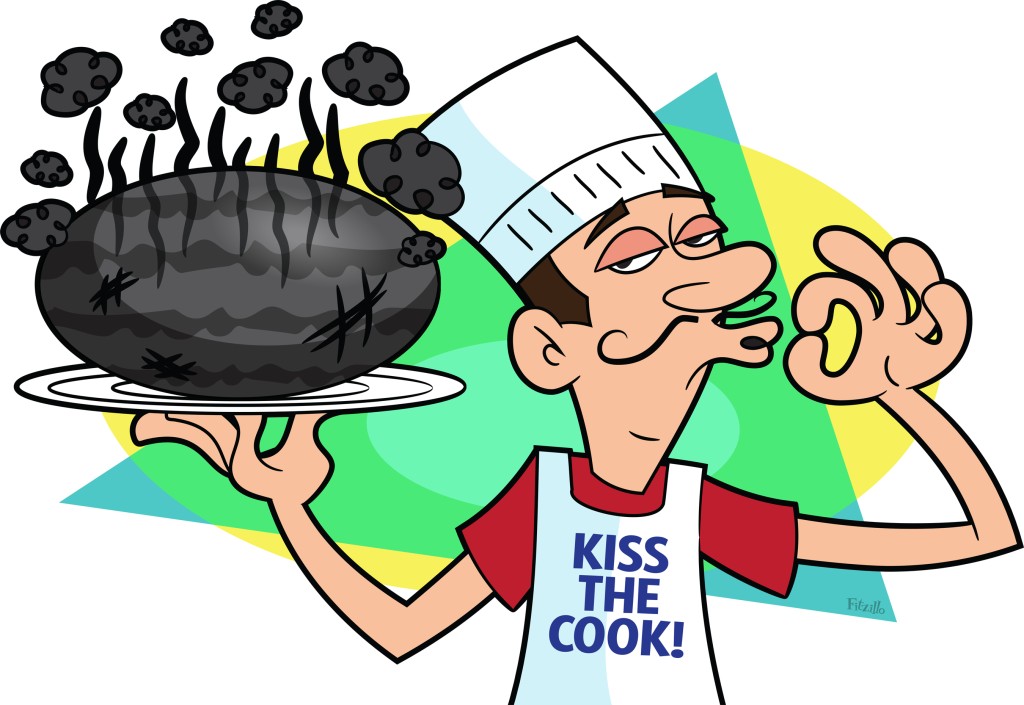 Little Sister wasn’t much of cook, but Big Sister said, “If you host the party at your house, I’ll bring the food with instructions. It’ll be easy.” The plan was to serve ham with premade salads, chips, watermelon and ice cream. Simple. “All you have to do,” Big Sister said, “is pop the ham in the oven for a couple of hours.”

Sure enough, boxes of food appeared on the porch the morning of the gathering. Little Sister put the ice cream in the freezer and the rest in the fridge. Two hours before the party, she popped the big, round ham, which had come conveniently wrapped in foil, into the oven. Came time to eat, table laid, family hungry, she pulled the pièce de résistance from the oven and peeled back the foil.

I’ve never baked a watermelon. I have, however, roasted a turkey upside down with the giblets inside. I have also served Portuguese kale soup complete with Japanese beetles. The sneaks hid in the curly leaves; like lobster, they turn red when boiled. (Who knew?) As for my homemade veggie burgers, according to one critic they “lacked structural integrity.”

No matter. We laugh. We eat. We enjoy each other’s company, because this summer, at last, it seems safe to gather outdoors as a breeze from the west blows residual Covid out to sea.

At our house, we like cookouts. Once upon a time, we used a gas grill. Easy. (1) Turn on the gas. (2) Press the igniter. Voilà: flames. Except one time I turned on the gas and pressed the igniter: no flames.

Hmmm, I thought, that’s strange, and watched, as though from a distance, as my arm reached out, my hand moved forward, and my index finger pressed the igniter again. Simultaneously, a thought formed: Uh-oh.

It was only a small explosion. Just a POOF that singed my eyebrows and sizzled my bangs. Now when we cook outside, we use charcoal, which gives the food a smoky flavor and does not explode. These days, my husband John does most of the cooking out. He thinks he’s good at it.

When the gang is about to descend, he’ll say, “No need to make a big dinner, Beck. You’ve been right out straight all day cleaning house, mowing the lawn, repointing the chimney, neutering the livestock. Let’s keep it simple and have a cookout.”

So … I trot to the store to buy hamburg, not-meat-burg, dogs, buns and sometimes chicken.

I shape the hamburg and not-meat-burg into patties. Marinate the chicken. Peel and boil potatoes, boil and peel eggs, chop onions and celery for Grandma’s special potato salad.

John enjoys a cold beer with his brother.

I cover the picnic table with a cloth.

When the charcoal’s hot, John places the burgers, dogs and sometimes chicken on the grate.

I collapse into a lawn chair with a tall glass of sun-brewed iced tea.

After a while, John flips the burgers and goes to remove the dogs … Uh-oh. “Shall I run inside and get a platter?” I say.

He saws into the caramelized chicken to check for doneness. Fragrant smoke billows.