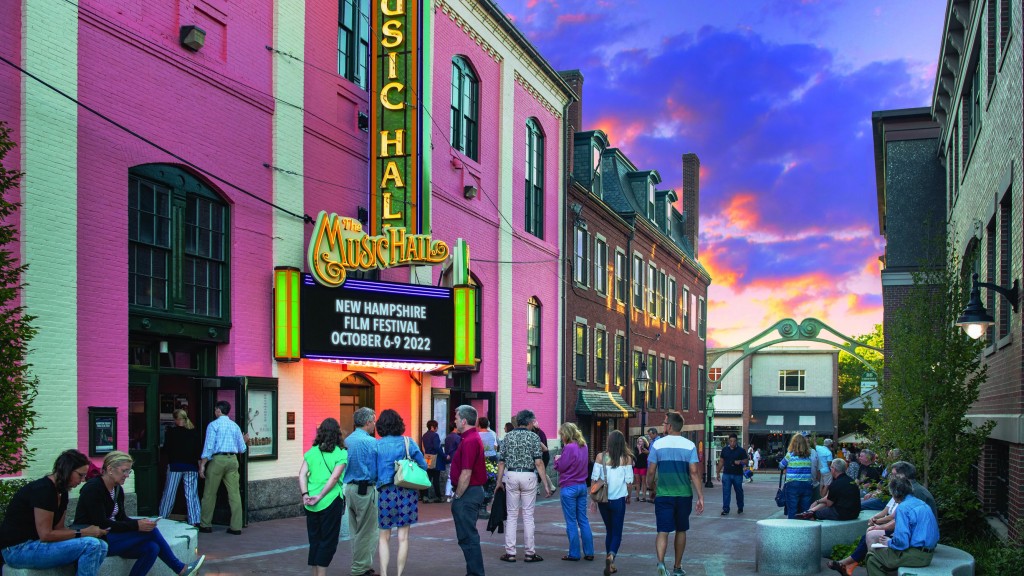 After a two-year hiatus, the New Hampshire Film Festival will make a huge comeback in October 2022.

Once again, professional filmmakers, screenwriters, film industry experts and film lovers will converge on the Seacoast for an unforgettable weekend.

The festival, which is celebrating its 20th anniversary one year late because of the pandemic, will be held from October 6-9 at the iconic Music Hall in downtown Portsmouth. 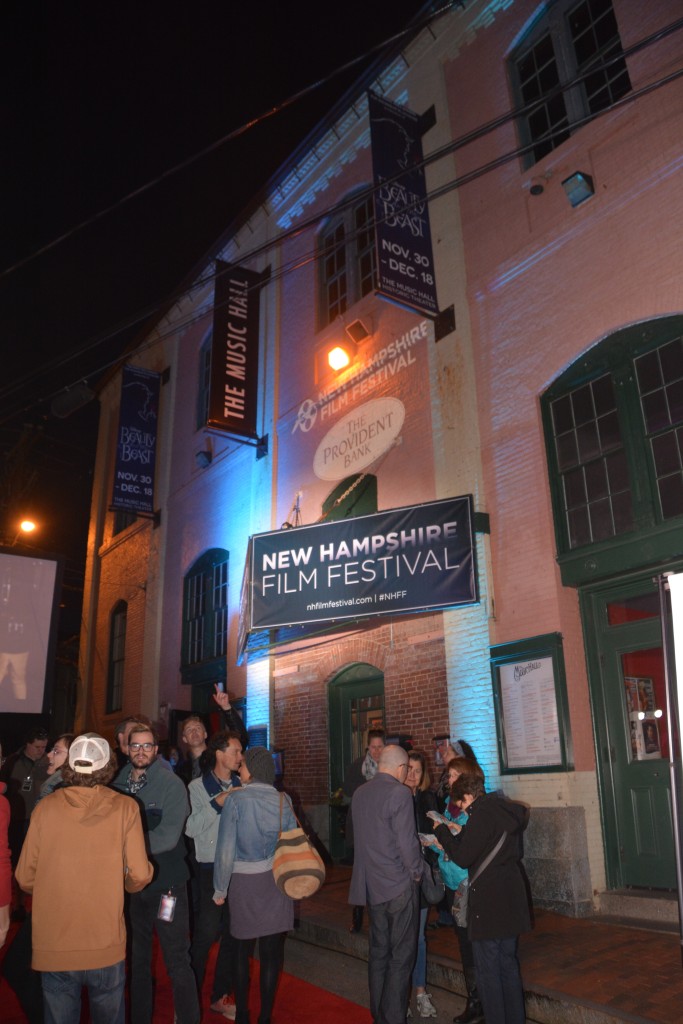 Since the New Hampshire Film Festival moved to its permanent home at The Music Hall in Portsmouth in 2004, as many as 10,000 film lovers can enjoy up to 100 films that cover an array of cinematic genres and styles. Photo by Barbara Zulkiewicz

“We are beyond thrilled to finally celebrate our 20th anniversary edition in person and bring together the best filmmakers from around the state and globe alongside our incredible community of attendees and sponsors,” says Nicole Gregg, the festival’s executive director. “It’s going to be a celebration like no other, and we are so grateful to showcase these amazing films and special events in our spectacular city of Portsmouth. We are also ecstatic to share so many new and exciting venues this city now has to offer — we can’t wait to welcome you all back this October!”

The festival was recently named an Academy Award-qualifying festival for the Short Film awards by the Academy of Motion Picture Arts and Sciences this past year. Like previous festivals, this year’s event will feature a screenplay competition, screenings of world-class films, industry panels and workshops for young filmmakers. For passes starting as low as $25, festivalgoers can pick and choose which films they want to see and which activities they wish to attend.

The New Hampshire Film Festival has grown tremendously since it made its debut in Derry in 2001 and relocated to The Music Hall in 2004. Many celebrities have also attended the festival, including Rae Dawn Chong, who sits on the festival’s board of directors, Tom Bergeron, Ken Burns and Mike O’Malley.

As many as 10,000 people attend the New Hampshire Film Festival each year and the four-day event engages more than 15,000 social media followers. Just outside The Music Hall, the city of Portsmouth has also experienced tremendous growth and now offers, along with its usual array of upscale shopping and eclectic dining, some dynamic venues for festival after-parties.

One of these new venues is The Music Hall Lounge on Congress Street. Formerly The Music Hall Loft, the Music Hall’s staff decided to make some changes to create an intimate audience experience. With tastefully lighted tables and a full-service bar, Music Hall Lounge patrons get to enjoy their favorite cocktails as they listen to live music performed on a small corner stage by artists such as Ellis Paul, the Sarah Blacker Band, Jonatha Brooke and River Sister.

Brittany Wason, producer and content manager at The Music Hall Lounge, explained The Music Hall opened this new venue in June. She says it was created in direct response to the great enthusiasm that Live Under the Arch concertgoers expressed after attending small, intimate outdoor shows that were held during the pandemic. Thus far, The Music Hall Lounge is enjoying a great following of music fans. 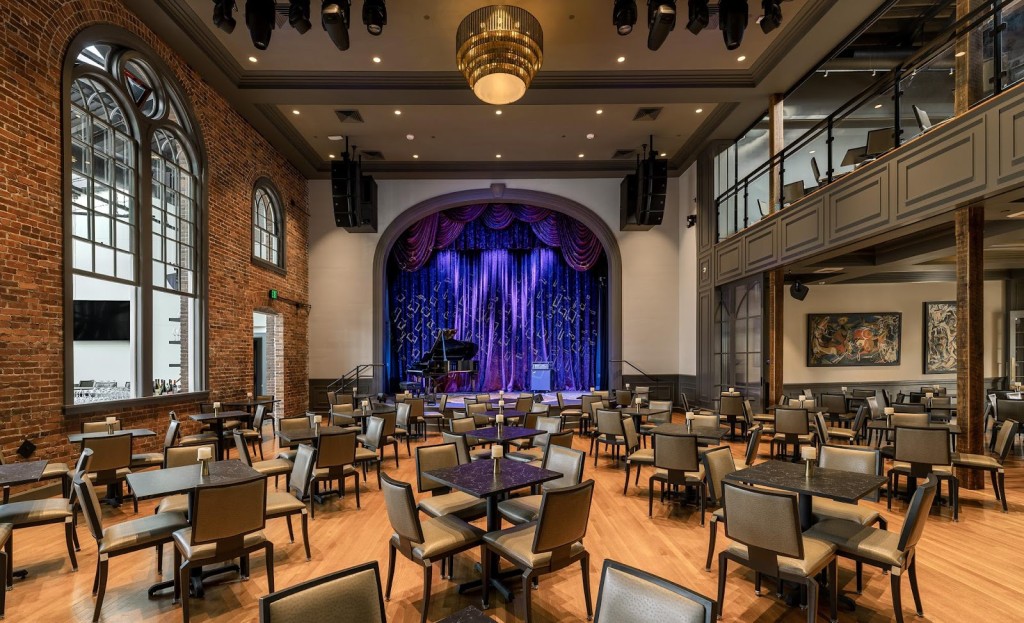 Just a few doors down from The Music Hall Lounge, Jimmy’s Jazz & Blues Club opened its doors in December 2021 after the Labrie family, owners of the River House in Portsmouth and the Atlantic Grill in Rye, successfully renovated the former YMCA building, into a classic jazz supper club where fine dining, elegance and live musical entertainment converge in ways that Portsmouth has never seen.

Jimmy’s features two levels that offer different stage views. The mainstage level is where the YMCA gym was located. There is another bar that runs along what used to be an outside wall that is now enclosed with glass. Herbie Hancock, Pat Metheny, Mavis Staples, Elvin Bishop, the Brubeck Brothers Quartet and scores of other jazz greats have played there to capacity crowds.

This month, some of the artists who will take Jimmy’s stage include Grace Kelly, the North Mississippi Allstars and Morgan James and Cindy Blackman Santana. 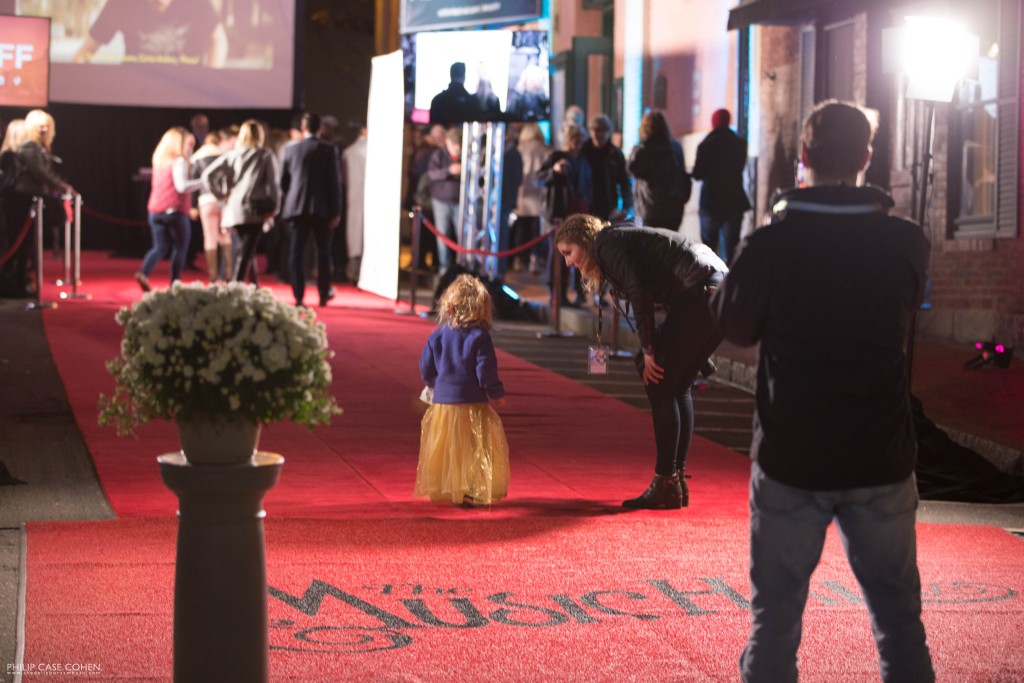 For three days in October, New Hampshire Film Festival fans from the Granite State and around the country can get the red-carpet treatment without going to Hollywood. Photo by Phillip Case Cohen

Suzanne Bresette, managing director of programming at Jimmy’s Jazz & Blues Club, says the response has been even better than they expected. The Labrie Family is also very proud of how they utilized many of the original features of the former YMCA building to preserve its history. In addition to using timber frames that were charred in a fire many years ago, they have also preserved small items that were recovered during construction and display them in glass cases that Jimmy’s patrons can view as they make their way upstairs to the venue.

Bresette says that Michael and Peter Labrie drew their inspiration from Moulin Rouge in Paris and classic jazz clubs from a bygone era when they envisioned the club.

“Our vision is for Jimmy’s Jazz & Blues Club to represent the highest standard of excellence for a jazz and blues club,” said Peter Labrie when they first opened the new club in the 1905 building on 135 Congress St. “We want to provide our guests a one-of-a-kind, world-class experience where we deliver the highest-quality music, food, and service — within a magnificent environment — for them to enjoy. We want to create the most positive and memorable live music experiences for every guest who comes through the door at Jimmy’s.”

“Michael and Peter have built a venue that jazz and blues musicians will love because few jazz and blues clubs in the world have the quality of production, sound and lighting technologies we have at Jimmy’s,” says Bresette. 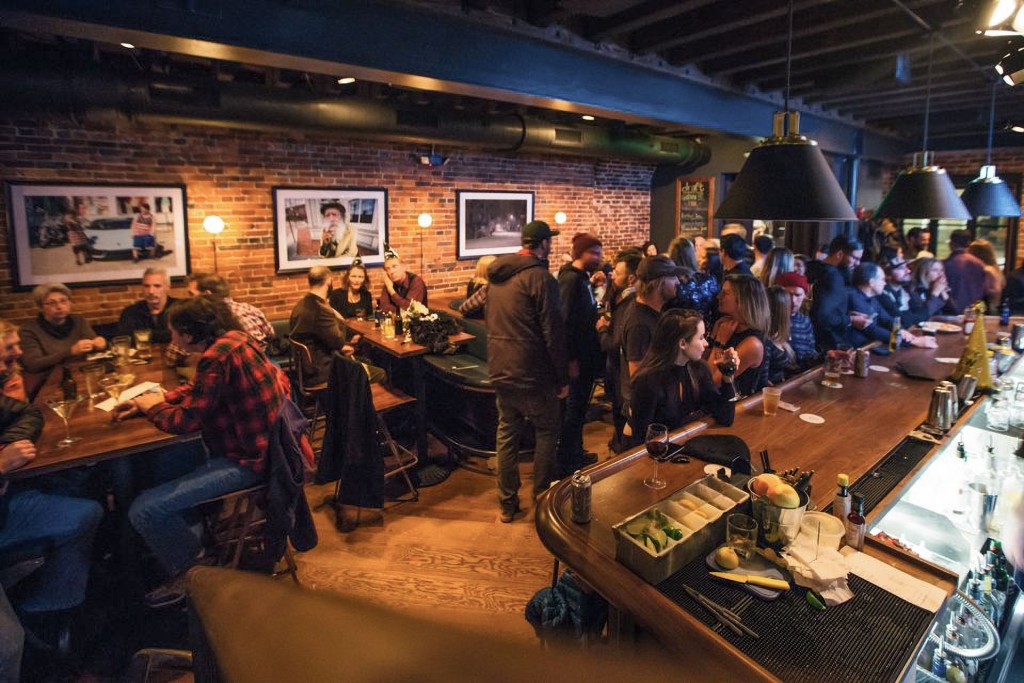 The Press Room’s second-floor venue offers full drink and food service, along with music, at a reasonable price.

Long before Jimmy’s Jazz & Blues Club came along, another iconic Portsmouth venue served as one of the primary places where seasoned musicians and up-and-coming artists could perform — The Press Room. The Daniel Street venue opened in 1976 after Jay Smith decided it was time to give Portsmouth a welcoming bar and space where local musicians could gather, jam and entertain his patrons. For more than 30 years, the Press Room’s vintage black typewriter hung from its sign. Sadly, the Press Room fell into disrepair and needed extensive renovations, and the venue closed its doors in 2017. When new owner Josh Sheets of Hampton purchased the establishment, the long-awaited makeover began in earnest. The final result when the Press Room reopened in the fall of 2018 was met with rave reviews.

A second-floor venue with full drink and food service now hosts scores of musicians for a very affordable price. The brick walls and black railings lend the venue an atmosphere that celebrates creativity and allows the audience to really take in the experience. 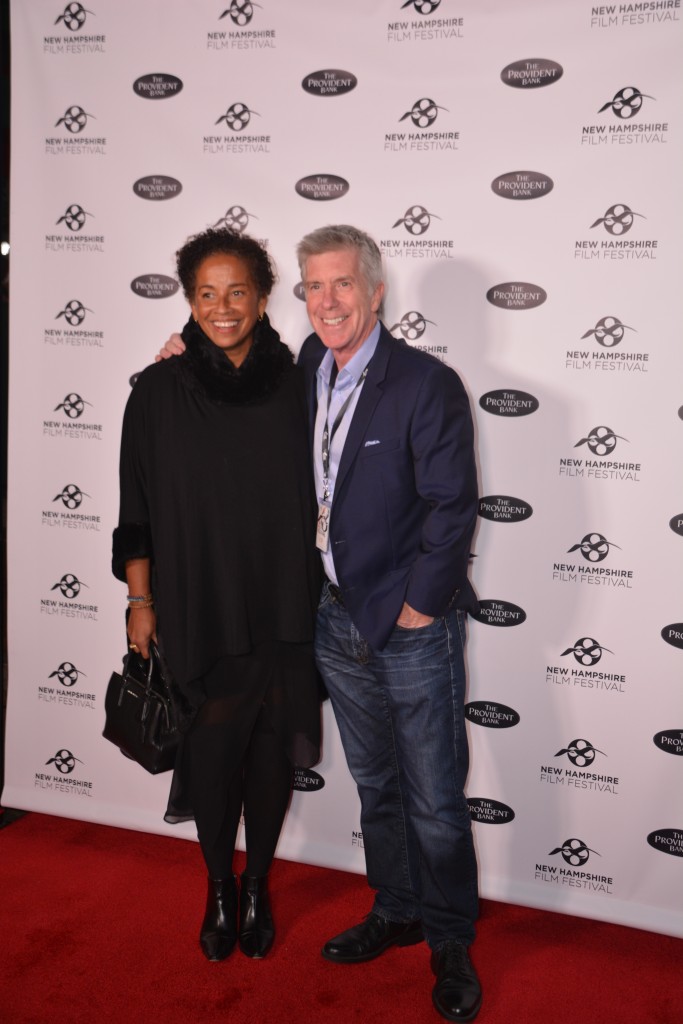 Portsmouth has always been known for its rich dining experience, but there is always room for more culinary innovation. Just as the city has seen a plethora of new luxurious apartment buildings and hotels, it now offers a skyline dining experience that yields breathtaking views of Portsmouth Harbor and the city.

The Rooftop at The Envio atop the AC Hotel of Portsmouth on Vaughn Street now offers patrons the option of an extensive menu with entrées and small plates along with a complete wine list and craft cocktails. It may also serve as the perfect complement to an enjoyable day at the New Hampshire Film Festival, especially for festivalgoers who are also staying at the hotel.

Those who venture into Porstmouth’s West End along Islington Street will also encounter hidden dining gems that complement this neighborhood’s renaissance.

Among them is the Botanica Restaurant and Gin Bar at 110 Brewery Ln. The French cuisine-inspired menu, specially crafted cocktails and wine selection will certainly satisfy anyone’s palate. The gin cocktail menu is the most extensive on the seacoast and represents a gin lover’s dream come true.

On Market Square, the former Breaking New Grounds café is long gone and so is the former Tuscan Market Bakery and Café. In its place is the Tuscan Market, an Italian bistro that represents another addition to the Tuscan Brands restaurant empire. With an inviting bar and intimate dining room, the Tuscan Market also features some of the most beautiful outdoor dining in the city that immediately conjures up all things Italia. The menu is different than the Tuscan Kitchen restaurant a few doors down but offers great variety.

If festivalgoers want to connect with Portsmouth’s rich history, a short stroll from Market Square will lead them to another new restaurant experience at Strawbery Banke — The Puddledock Restaurant on Marcy Street. It opened its doors as an authentic Colonial-era tavern in 2021 to bring patrons closer to those days when Portsmouth was previously known as Puddledock. This dining adventure back in time coupled with a walk among Strawbery Banke’s historic homes and grounds provides a perfect bridge between the present and the not-so-distant past. 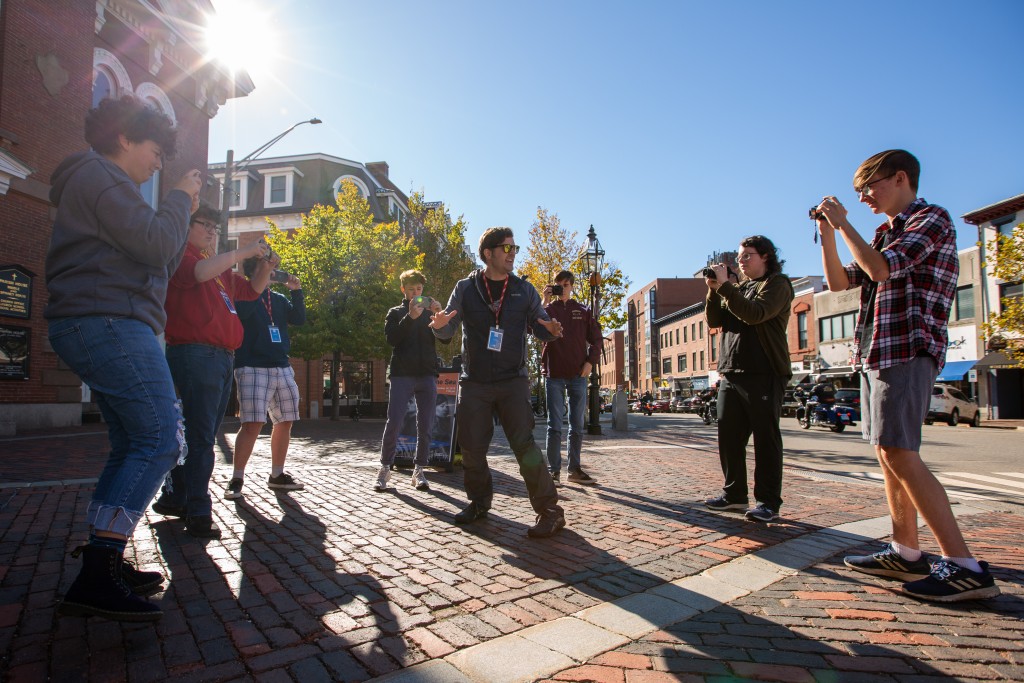 For film festivalgoers who want to enjoy some great lobster rolls, craft beer and cocktails, all they need to do is take a short walk across the Memorial Bridge to Badger’s Island in Kittery where The Buoy Shack awaits. It offers dine-in and take-out plus spectacular views of Portsmouth Harbor. As of this writing, The Buoy Shack was close to finalizing the last details before a scheduled grand opening.

The fact that Portsmouth has emerged from the pandemic with so many new and exciting musical venues and dining experiences shouldn’t surprise people. This city’s creative vibe and penchant for resilience in the face of challenges is the current that permeates every new eatery, café, retail shop and venue that are created here.