Saved by the Ball

For him, the cure was just down the alley 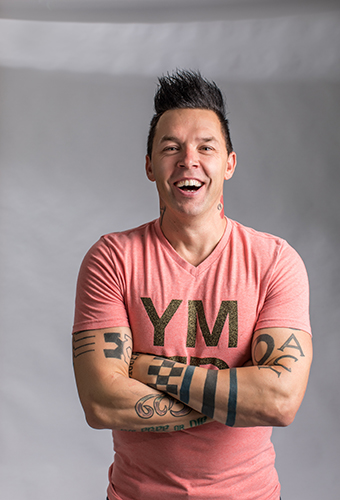 About the author: Goffstown native and lifelong New Hampshirite Justin Spencer is the frontman for Recycled Percussion. The band has performed all over the country, including at its own headline show in Las Vegas. He also founded LegacyX, with a mission of teaching people how to meet their goals and make their most outlandish aspirations come true. Photo by Kendal J. Bush

My average score in candlepin bowling was 108. I was the youngest regular at Boutwell’s Bowling Center in Concord, and I was probably the only adult who wasn’t drinking beer and slipping out back for a smoke between sets. With my tattoos, rock ’n’ roll haircut and technicolor clothes, I guess I stood out in the crowd of families dressed in Dockers, pressed jeans and NASCAR shirts, but these were my people. This was where I belonged. This bowling alley had saved my life.

A year before, in 1996, I had been at the Olympic Summer Games in Atlanta. I’d spent a hot day watching field hockey and walking around the sun-baked streets of the capital of the South. Lying in my hotel bed, a bit worn out, I had a sudden feeling of anxiety. Nothing too weird at first, but it didn’t start to go away, like most moods. Instead it revved up like a stock car engine and turned into a feeling of total white hot fear. I didn’t know what was happening to me, but I knew what I thought. I thought I was going to die. The thought was terrifying.

I crawled into the shower, thinking it would cool me off, but it was 20 minutes before I was myself again. All I could think was, “What the f*ck?” Two weeks later the experience was pretty much forgotten. I’d chalked it up to a heat stroke. Put it behind me.

Then it happened again. And again.

And as the weeks went by, these spells, that I now know to be panic attacks, became so common that just the thought that I might get one was enough to trigger a new one. I’m an extrovert, an outgoing kid, but I was afraid to leave the house, scared it would happen in public or cause danger to myself or someone else. I slumped into serious depression. I was unable to leave my apartment except to see doctors who began prescribing me a menu of drugs, antidepressants, anti-anxiety drugs, God knows what. My fear of dying was still there, but worse was the very real fear of losing everything else, my relationships, my family, my girlfriend and my job.

The drugs weren’t doing the trick. I knew I had to try something on my own, break out of this prison of fear. My apartment was just a block from a bowling alley, so I walked down and checked it out. This was not “big ball” bowling like in “The Big Lebowski.” This was pure New England candlepin. I bowled a string and did a quick head check. No panic. So far, so good.

The place was dim, calm and predictable. People were so focused in their little groups, with just occasional bursts of excitement over a strike or when someone cleaned up a tough spare. Even the sounds of the balls hitting the tall wooden pins was muffled and soothing.

I didn’t just become a regular, I joined a league. I bowled for hours on end, improving my score, but every day I was also making tiny steps out of my depression and fear. That bowling alley was a miniature world that was within my control. It gave me a place where I could work through my anxieties, move beyond them, find my way back to normal.

Normal for me is not normal for everyone. In school, I’d been coded as hyperactive at 8 and put on Ritalin. I’ve got it under more control now, but I’m ADD to this day. I won’t take the drugs. It’s not for everyone, I know. Medicine has done a lot of good, I’m sure, but I prefer to find my own ways of controlling my moods, finding my focus. And doing so has taught me that we have more power than we know. I needed to change, but the biggest obstacles to change are not the physical ones, they are mental.

In the darkest period of my life when I really wanted to hide, instead I reached out and tried something new. The panic I experienced robbed me of my purpose in life, my direction, left me with no idea why I was even here. Bowling showed me there was something new, another way to approach my challenges. You can find solace and inspiration in the strangest places. The world is full of opportunities like that if you are brave enough to seek them out. Find something to spark a new interest in your mind, and with it you’ll find a new beginning.

Power Tip 1: Use Your Head

In our culture, the body gets all the credit. Think about the most famous people in America — most of them are muscular sports stars, hot-looking actors from Hollywood or sexy singers from Nashville. Ask people on the street to name the most intelligent people in the world and you’ll usually get the names of either politicians (who are really kind of like professional wrestlers) or writers (who are really like entertainers). Ask them to name three scientists and you’ll usually get Einstein, Einstein and Einstein.

And the power of the mind isn’t just about intelligence. Being super-smart is a little bit like being musclebound. It’s not what you’ve got, it’s what you do with it. The true strength of the mind is all about focus, clear thinking, rationality and sanity. There are plenty of awards for people who are the best spellers or who can answer the most trivia questions on “Jeopardy,” but it’s hard to hold a contest for who is the most sane or level-headed person in the world. You may have hear people say, “There’s nothing less common than common sense.” I’m afraid that’s true, but it’s not because people don’t have it, they just don’t use it.

“An architect’s most useful tools are an eraser at the drafting board and a wrecking bar at the site.”
— Frank Lloyd Wright, as referenced in Justin Spencer’s “One Life, One Legacy”

Make no mistake, the body is crucial, but everything the body does, every project you build, every plan you make, it all starts somewhere else. That place is hard to put your finger on — it’s in some invisible control room where you make the decisions and deal with the consequences of your decisions and figure out ways to make better decisions. It’s not always calm in that room. It’s like air traffic control. The stakes are high and sometimes there’s just too much going on. Things don’t always make sense the way we’d like them to. 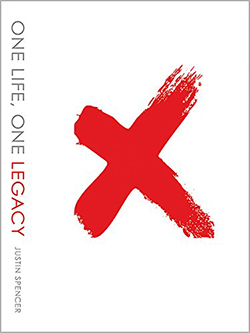 Justin Spencer, leader of the internationally famous “junk-rock” band Recycled Percussion, put his personal philosophy of life down in words in “One Life, One Legacy.” The book is available on Amazon and at his new “Chaos and Kindness” retail store in Laconia.

Go somewhere you can be alone, completely alone. Bring nothing but a pad of paper and a pencil (and yeah, make sure you have an eraser). Forget about everything that nags your mind for a while. Set aside your friends and families, forget about what everyone else expects of you, even your job. Especially your job.

Now try to remember the things you always wanted to accomplish, no matter how crazy or unlikely. Write down everything you can think of that would make you proud to be a part of, happy to be working toward, excited to get up in the morning and pursue every day. If you start to think it’s ridiculous, that’s no reason to stop. That probably means you’re getting close. Don’t judge, just dream or imagine what your perfect world would be like, what you would be doing in it. What are the things you wouldn’t mind sacrificing for, the things you could defend with your life?

At some point in this exercise, see if you get a glimpse of that clue, start to feel those butterflies that you know from that last time you were in love. That’s like a Geiger counter clicking away, helping you find your legacy. Don’t give up, because it’s there somewhere.